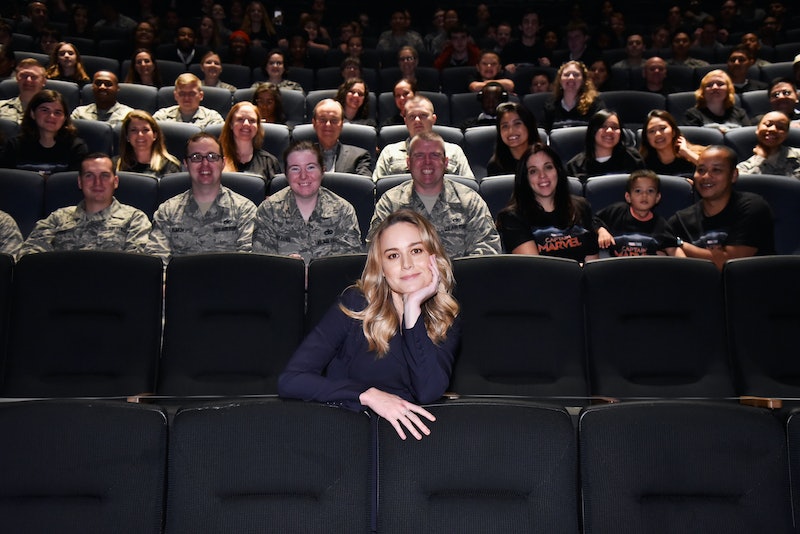 It's hard to imagine that anyone would turn down the chance to live out their childhood dreams of playing a superhero on the big screen, but when it came time to cast Carol Danvers, Marvel had its work cut out for them. Brie Larson was hesitant to even talk about starring in Captain Marvel when Marvel first extended an offer to meet, explaining to The Hollywood Reporter that she was unsure that she could handle being the face of a major superhero franchise.

In the magazine's recent cover story, the Oscar winner recounted the experience of her first contact with Marvel executives in the middle of the awards season campaign for Room. "I was hesitant to even meet," Larson said. "I was like, 'I don't think what comes with a movie like that is anything that I can harness and hold. I'm too much of an introvert. I'll just collapse.'" Luckily, Larson ended up taking the meeting, and once she heard the pitch, the actor said, it was impossible to say no. "But then they started talking to me about this film, and I was like, 'Drat, this is the culmination of a lot of things I've wanted,'" she added.

And though she's excited to see Captain Marvel arrive in theaters as the "big feminist movie" that she's always wanted to see, Larson is also upfront about the pressure on her shoulders as the star of Marvel's first female-fronted superhero film. "There's this sense of setting this thing up," Larson told THR. "I know it's exciting and fun to be like, 'Will it sink or will it float?' 'What's going to happen?' 'Can women exist in the world?' 'We're not sure yet!'"

It's true that many critics will use Captain Marvel's box-office numbers as a way to determine whether or not female-led superhero films can be successful (an already flawed inquiry considering the success of Wonder Woman). But, as Larson said, "Women have been opening movies since the silent era. We have been part of every major art movement. People just push us away once the movement gains momentum and act like we were never really there."

In fact, one thing the actor is particularly excited about regarding the release of Captain Marvel is that it will hopefully facilitate conversations about women in Hollywood, and beyond. "The very nature of this film means that I'm having conversations that I'd like to have about what it means to be a woman," Larson explained. She added:

"What strength looks like, the complexities of the female experience, female representation. It's surprising and cool that my first giant movie I get to be having those kinds of conversations. But that's also why I've waited and been particular about what jobs I do."

Another cool, and perhaps unexpected, perk of Captain Marvel being her first big blockbuster is how the rehearsal and training process helped the actor understand her strength and responsibility as a woman in Hollywood. In fact, according to the piece, she often balanced her time in the gym with Time's Up meetings. (Larson is one of the movement's founding members, and often hosted meetings in her home during the early days of planning, according to THR.)

"It's the time that I was starting to be able to lift a lot more and I was learning how to punch and kick and do judo throws," Larson explained, of how training to play Kree Commander Carol Danvers has changed the way she carries herself in real life. "It was also the time that I was learning how to sit at a conference table and slam my hands on the table and say, 'You need to listen to what I'm saying,'" she recounted. "And learning to not feel guilty about taking up space like that."

Back in December, Larson told Bustle that she was looking forward to seeing the way women react to Captain Marvel, explaining that the film's female-penned screenplay and female co-director will help it speak to female audiences. "If you’re going to tell this story you’ve got to make sure that it’s really embedded in everything," she explained.

"It has to be in the script. It has to be in every part of it ... that it speaks to us, that finally we’re allowed to see our personal hidden secret language," Larson continued. "I’m sure there are movies for you guys as dudes, that you’re like, 'Whoa, that’s so true to my experience.' We’ve never had that."

And, as the Oscar winner explained in her Hollywood Reporter interview, she knows exactly what feeling she's hoping Captain Marvel inspires in female moviegoers. "As a kid, I wanted to be an adventurer," Larson told the outlet. "I wanted to be a smart-ass. I wanted to get my hands dirty. But it wasn't until being in the theater seeing Wonder Woman ... I was like, 'Why is this making me cry so much?' I realized 'cause I hadn't had that, and there was a kid in me that was like, 'Oh, my God. I can do that?'"

If Larson's passion for Carol Danvers and the Captain Marvel movie isn't enough to bring you to tears, seeing the beloved superhero finally kick butt on the silver screen might just do the trick. Just make sure that you bring tissues with you to the theater.