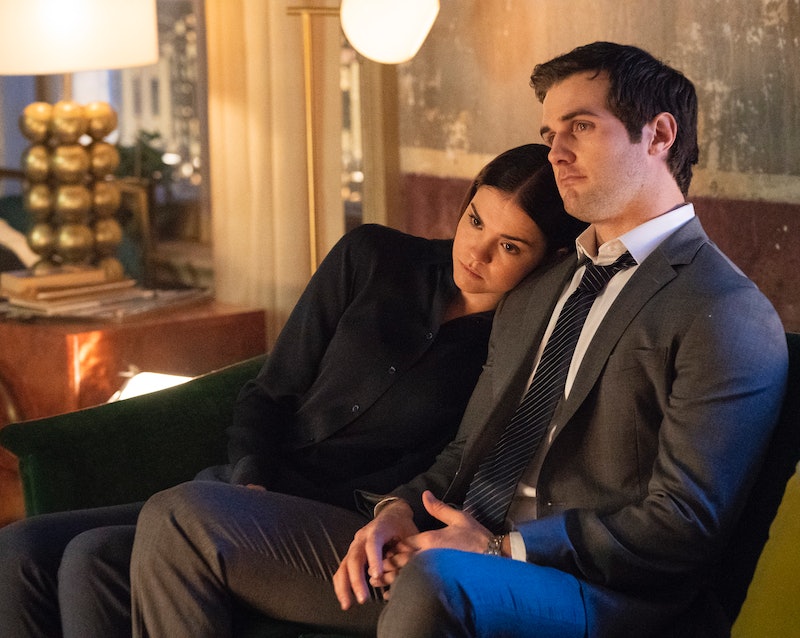 Callie Adams Foster certainly think she knows everything, which isn’t surprising given her youth and lack of experience in, well, anything. But Callie has her convictions and her beliefs, and as annoying as she can be sometimes on Good Trouble, Callie is right to be concerned about one thing — Jamie, her boyfriend, being a card-carrying member of the Republican Party. Dating a Republican is not what she signed up for.

Granted, Callie should have talked to Jamie about her concerns rather than straight-up running away, which seems very on brand for Callie. But Callie’s argument to Jamie of why she’s concerned about his political affiliation makes sense. At Jamie’s work party, Callie pictures herself as Jamie’s wife, complaining about how stressful renovations are and wearing a huge rock on her left ring finger. While Callie’s problem is more that she wants more out of her career than being someone’s wife, it’s two-fold here.

Callie sees these women — and everyone at the party — as blithely unaware or unaffected by the horrors currently happening in America. They are rich, mostly white, and untouched by things like voter suppression, attacks on a woman’s right to choose, and LGBT rights because they, as rich white people, will always have access to whatever they want.

If Jamie is a Republican, which he defends as being a part of the party of Lincoln (nice speech, Jamie), it signifies that he might not care about the poor and downtrodden in the way that Callie does. Jamie might not be the good guy she was hoping for, despite his protests the current administration doesn’t align with the "real" Republican party. As Callie says, at what point do you say you still align with a party that supports separating children from their parents, champions gerrymandering, and stays silent when their current leader wages racist attacks against legislators.

When do you step away? Silence is acceptance for Callie. This is not a political issue or even a dating issue. It’s a moral one.

And yes, people should be reaching across the aisle and talking to each other about their values and trying to find common ground and all that in this time of crisis. But there's no grey area when it comes to these sorts of issues — Callie and Jamie aren't disagreeing over the percentage point at which we tax people who live under the poverty line. It's about how to treat people seeking asylum at the borders, whether transgender people are protected under the law, or if a woman has a right to basic healthcare. For many people, these things are dealbreakers. It could be for Callie, too.

In the end, Jamie rips up his voter ID card — which is strange that he would carry it around, but OK — and he and Callie frolic in the pool and decide to move in together so she can freeload off someone who is not her sister. Jamie looks good on paper, and Callie keeps trying to jam him into her life like a puzzle piece that’s almost right. It won’t be something big that will be their undoing — it will be Callie’s secret doubt that Jamie is the man she wants him to be.

More like this
Hilary Duff's Husband Matthew Koma Has Her Name Tattooed On His Butt
By Jake Viswanath and Stephanie Downs
'That '90s Show' Star Callie Haverda Got Advice From Mila Kunis & Ashton Kutcher
By Brad Witter
Man Meets Politics: ‘Boy Meets World’ Star Ben Savage Is Running For Congress
By Jake Viswanath
The 'Teen Wolf' Creator Revealed If 'Wolf Pack' Takes Place In The Same Universe
By Grace Wehniainen
Get Even More From Bustle — Sign Up For The Newsletter
From hair trends to relationship advice, our daily newsletter has everything you need to sound like a person who’s on TikTok, even if you aren’t.