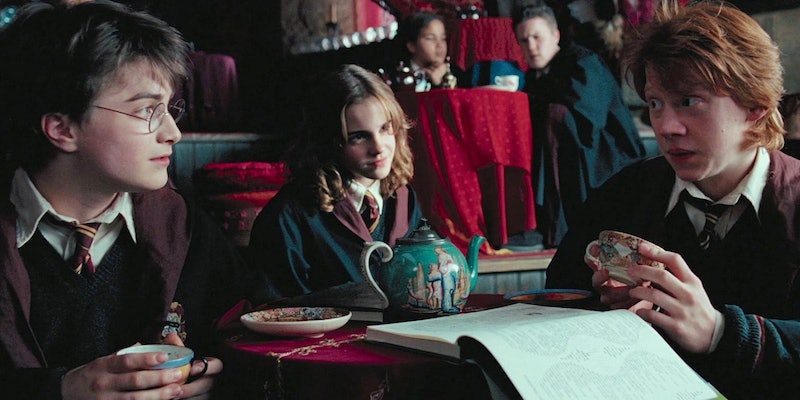 On Wednesday, The Today Show announced "20 Years of Magic: A Harry Potter Fan Contest," in search of the ultimate Potterhead. In order to enter, fans must answer one question: "What is your favorite passage from the book Harry Potter and the Sorcerer’s Stone and why?" Three winners will be selected to win a weekend getaway to NYC beginning Oct. 5, which will include tickets to see Harry Potter and the Cursed Child on Broadway, and a guided tour of the Harry Potter: A History of Magic exhibit, among other prizes.

2017 and 2018 have been filled with events and releases to commemorate the 20th anniversaries of Philosopher's Stone and Sorcerer's Stone. The Harry Potter play, Harry Potter and the Cursed Child, finally hit Broadway in April, when it opened at the Lyric Theatre. One year after it appeared in London, an exhibit titled Harry Potter: A History of Magic is scheduled to premiere in New York City on Oct. 5. Thanks to a partnership with the New-York Historical Society. Libby, the library eBook app, has elected to offer Harry Potter and the Sorcerer's Stone at no cost until Sep. 10. Many stores, including Pottery Barn, have released new lines of Harry Potter products.

The Times Square Harry Potter video isn't Scholastic's only contribution to the 20th anniversary fun. The publisher has also released a new set of Harry Potter books with all-new, illustrated covers by Brian Selznick, available at your favorite bookseller now. Scholastic will also publish the exhibition tie-in book, Harry Potter: A History of Magic, on Oct. 5. The publisher already released the other tie-in book Harry Potter: A Journey Through a History of Magic through its imprint, Arthur A. Levine Books, in October 2017

Two new Fantastic Beasts books are on Scholastic's horizon as well. A bound version of the Fantastic Beasts: The Crimes of Grindelwald screenplay will be available on the film's release date, Nov. 16. Another tie-in title, Harry Potter and Fantastic Beasts: A Spellbinding Guide to the Films, is slated to appear sometime in October. In other words: There's plenty to help you celebrate Harry Potter's 20th birthday in the United States.