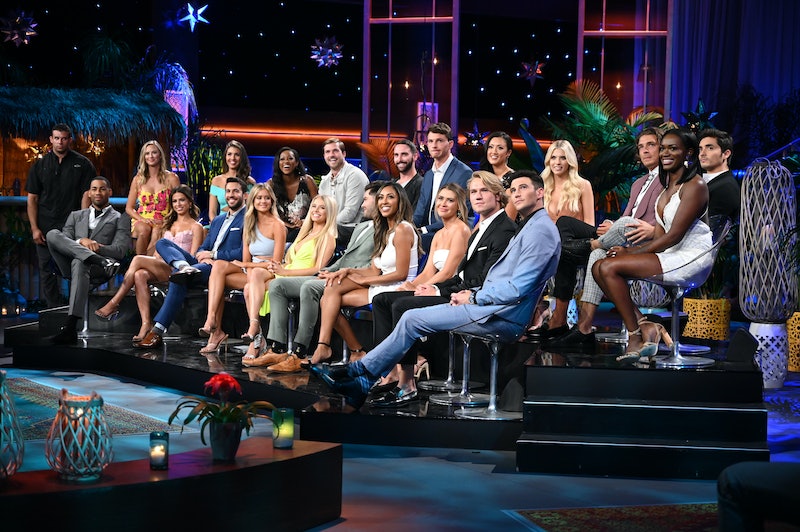 Most of the excitement happens on the beach on Bachelor in Paradise, but there will be plenty of drama in the studio during the Bachelor in Paradise Season 6 reunion special, too. While you might not want to click the link if you want to avoid spoilers, Bachelor Nation whisperer Reality Steve reported that the Bachelor In Paradise was filmed all the way back on Aug. 27, while most of the drama was still playing out for viewers onscreen. While that's only a mere three weeks in real time, that's the equivalent of three years in Bachelor Nation time, which means that anything you think you know about the couples might not be true anymore.

While their fates are still yet to be decided on the beach after the Fantasy Suite dates, current couples Demi and Kristian, Chris and Katie, Dylan and Hannah, and Clay and Nicole will definitely be there, along with particularly buzzy contestants like Tayshia, John Paul Jones, Caelynn, Blake, and Kristina. And the preview for the finale promises yet another showdown between Jordan and Christian — plus the announcement of the next Bachelor — so the reunion show certainly won't be dull.

Still, what's potentially the most interesting is what has happened to all these Bachelor Nation members since the reunion episode filmed. Again, the time between the filming of the reunion on Tuesday, Aug. 27 until the time it airs on Tuesday, Sept. 17 is exactly three weeks. But three weeks can change everything for a Bachelor franchise couple.

Paradise may have been on America's TVs for six weeks, but the filming of Paradise took place over a few weeks in June — and some contestants were only on the beach for a couple of days. So based on the breakneck speed that BiP couples connect and make commitments, it's fairly reasonable to wonder if any of the pairs who are engaged at the reunion on Aug. 27 have broken up by the time it airs ... or if any couples who had broken up are back together (looking at you, Tayshia and JPJ).

When it comes to the main shows of the franchise, the lead has a little more time to sort through their paramours. Typically, like with Hannah Brown's season — which began filming in March and ended in May — the Bachelorettes and Bachelors have the course of about two months to figure out who they want to be engaged to by the end. That's still a ridiculously short time by real-life standards, especially since the show dictates when you get to see your 20 plus contestants. So just like Hannah ended things with her short-lived fiancé Jed on The Bachelorette after the cameras stopped rolling, the very same thing could happen with the Paradise couples.

As shown above, Entertainment Weekly shared a preview of the reunion show that seemed to indicate that Katie and Chris may have broken up even between filming Paradise and the reunion. Then, there are cases of people breaking up at the reunion, like Kamil and Annaliese (who will be in attendance again this year). Or, there are times an engagement goes down during the reunion, like with Taylor and Derek (the latter being another person to do a repeat attendance at the Paradise aftershow). The point is, nearly anything can happen between Paradise and the reunion — and for Season 6, the same logic applies for between the reunion show and now.

For every Chris and Krystal, Tanner and Jade, and Evan and Carly (all of who will make an appearance at the reunion, there are way more couples who meet on Paradise and don't make it. With this in mind, you might want to keep an eye on the contestants' social media accounts during and after the reunion to see if anyone's relationship status has significantly changed. And if all of this is bumming you out, just remember how Ashley and Jared tried Paradise twice and weren't able to make it work until after their time on the show was totally over. So even if couples break up, that doesn't mean that they can't eventually find their way back together in the real world. Or, even better for fans who want to see every moment of the drama, there's always next Paradise season.