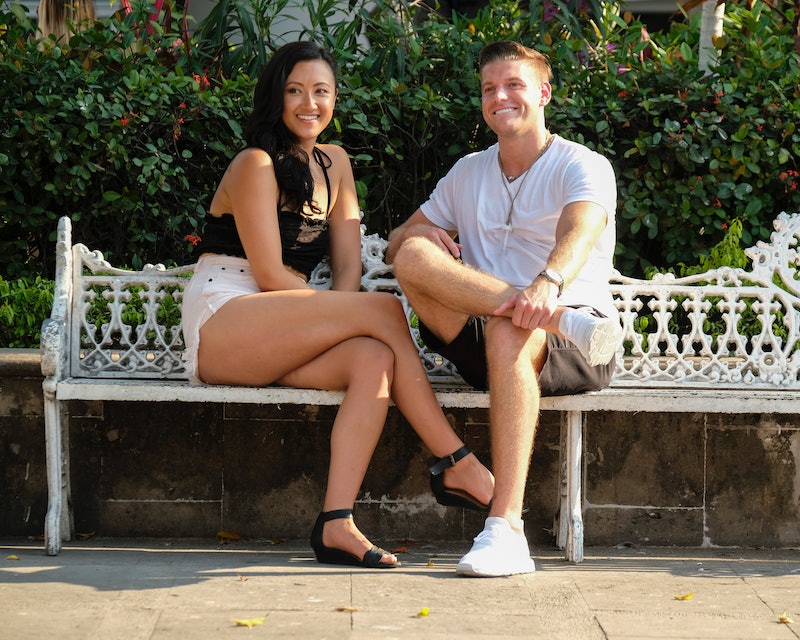 One of the most glorious moments to ever occur on Bachelor in Paradise was the kiss between Matt and Sydney. But just because this milestone relationship moment had everyone on the beach and from their couches cheering, it doesn't necessarily mean that Matt and Sydney are dating after Bachelor in Paradise. The pair have shared some banter on social media, so there's certainly a chance that they could be together. Yet, based the fact that he went on a date with Bri afterward and their sloth-like slow start, Sydney and Matt might just be friends even after their epic kiss.

The Bachelor in Paradise producers outdid themselves with the footage they used for Sydney and Matt's first kiss with animals, giant crowds, and even spaceships celebrating their monumental achievement. But the day after their rose ceremony smooch, Matt went on a date with Bri where he kissed her with far less hesitation. While there aren't many clues about Sydney and Matt's current status, fans of this pair may be happy to know there's even less evidence on social media that Matt and Bri are still dating. So if Sydney and Matt aren't together, it probably doesn't have much to do with Bri — even if Sydney has teased otherwise on Twitter.

When Matt and Bri kissed during their surfing date, Sydney took to Twitter to make fun of Matt. "Soooo @Oldmattdonald22 you can kiss on first dates. I see how it is," she wrote. The show was focused more on Blake's monologuing at the time, but it was pretty surprising to see Matt going in for a make-out session so quickly considering it took him a while to feel comfortable kissing Sydney. But it doesn't appear that Sydney is genuinely harboring any resentment toward Matt. And Matt took her sass in stride when he replied with a GIF of an anxiety-ridden Kenneth the Page from 30 Rock.

Sydney and Matt have had other similar Twitter interactions, so this Bri-related banter isn't an isolated incident. When their kiss aired — complete with the nature-filled montage — Sydney wrote, "Round of applause for @Oldmattdonald22 everyone." Matt retweeted her post and mocked his sweatiness (that was so intense that it required some assistance from John Paul Jones) leading up to the kiss. "I'm patting myself on the back right now. My very very sweaty back," Matt wrote.

Although Sydney had connected with Mike Johnson for a bit, she had been rather unlucky in love for most of her time on Paradise. She acknowledged that in a tweet reply to a fan account when she wrote how she was "shocked" that Matt had chosen her for the double date with Luke S. and Kristina. Matt replied by focusing on the good time they had during the pepper-eating competition, so their good humor toward one another is clear through their social interactions.

Before their relationship on Paradise aired, Sydney and Matt interacted on Twitter just one time. Sydney wrote that when she was attempting to be a courteous driver and allow a pedestrian to cross the street, she got flipped off. Matt cheekily replied, "She probably has been watching BIP and disgruntled with all the drama you have been stirring up." So, while it's a stretch, perhaps this is a clue that their relationship does last post-Paradise.

As for their Instagram accounts, Sydney has been mostly featuring her modeling work and dancing recently. Matt only has a little more than 50 posts and while he has been posting more since he joined Bachelor Nation, he hasn't shared anything that indicates he's with Sydney. But at least curious fans have their Twitter comments to one another to mull over.

For now, it looks like these two just might be buds after Paradise. However, if they did want to be together, Sydney recently made a move that could make it easier for them to date. Sydney wrote on Twitter on Aug. 11 that she relocated to Los Angeles from New York. As Matt is from Los Gatos, California, up closer to San Francisco, they still don't live super close to one another. But at least they are on the same coast if they did want to meet up. And if they do hang out, here's hoping NASA, football fans, and wildlife will continue to follow them around to cheer their budding relationship on.