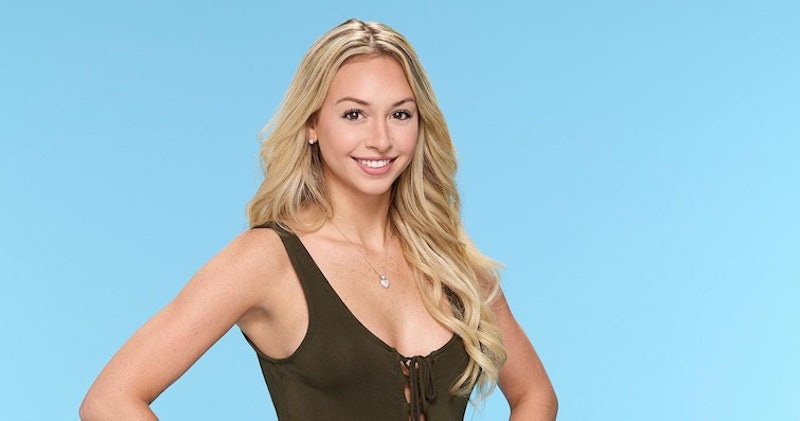 Normally, Bachelor In Paradise is the flirty, fun spinoff to The Bachelor and The Bachelorette, which invites popular contestants from both shows back for a second chance at finding nationally-televised love. Currently, however, the fate of BiP is up in the air after "allegations of misconduct" were reported on set, effectively halting production of this season. While nothing is confirmed, sources claimed to TMZ that a non-consensual drunken sexual encounter between DeMario and Corinne allegedly took place — and fans of The Bachelor are already holding Corinne’s past activity on the show against her. (Sources close to DeMario claimed to TMZ that the two did hook up, but nothing in their statements indicated that he thought it was anything other than consensual. Corinne and DeMario have not returned Bustle's request for comment.)

Earlier: In a statement to Bustle, Warner Brothers, the show's production company, said this:

It's not clear exactly what happened as neither party allegedly involved has spoken directly and the investigation is ongoing, but the claims from anonymous sources allege that something sexual occurred between DeMario, who was recently dropped from Rachel’s season of The Bachelorette, and a female contestant; according to two sources at People Magazine, the female contestant involved in this encounter may have been too drunk to give consent. TMZ suggests that this contestant was Corinne from Nick Viall’s season of The Bachelor.

On social media, some frustrated fans have taken to blaming Corinne for the production shutdown, citing her sexual history and “attention seeking acts” to dismiss the notion that she could have been assaulted. “Didn't Corrine take her top off on Nicks season??” one Facebook user on the Bachelor Fans On Bustle page said. “The [sic] also said her vagina was platinum??? So why bring her back bc apparently she uses her body to get what she wants.”

It’s entirely possible that only producers of the show will ever know what happened that night. However, it’s now more important than ever to stress that a person’s sexual history should never, ever factor into any discussions of whether or not they are the victim of sexual assault. Corinne may have been presented in a sexually promiscuous manner during her season of The Bachelor, but if she was truly taken advantage of by a fellow BiP guest while too drunk to consent, she still deserves respect regardless.

For victims of sexual assault, this tendency towards victim-blaming often has real-world ramifications. According to the Rape, Abuse & Incest National Network (RAINN), an average of 321,500 U.S. residents over the the age of 12 are the victims of rape and sexual assault each year, but only about one out of three rapes are reported to the police. Another study from University of Texas at Austin, found that of the 129 female college students who were sexual assault survivors, 62 percent blamed themselves for their own sexual assaults — which could also be contributing to the lack of reporting.

Again, what happened between Corinne and DeMario while filming Bachelor In Paradise is still not completely confirmed. But if you’ve already assumed it’s Corinne’s fault because she publicly celebrates her own sexual prowess, then I would urge you to sit down and really examine why your first instinct is to blame a woman for her own assault. Odds are, that impulse is not coming from a good place.