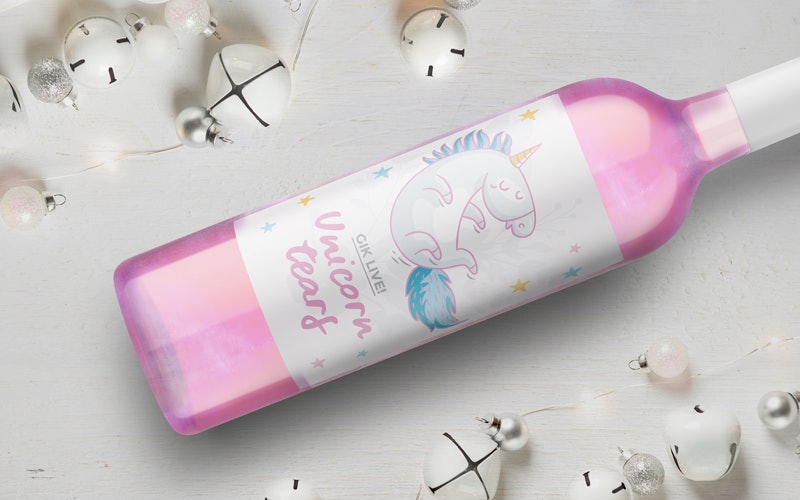 If you’ve made it a goal to inject 2019 with as much magic as possible, I have excellent news for you: “Unicorn Tears” wine from the Spanish winery Gik is here, and yes, it’s pink and sparkly. Indeed, Unicorn Tears — in Spanish, “Lágrimas de Unicornio” — claims to be “the pinkest rosé that has ever been created,” according to a press release provided to Bustle. I’m not sure if the company has any data to back up that claim, but I can at least confirm that, on sight, the wine is very, very pink. Praise be to our unicorn overlords! Or… something.

If the name “Gik” sounds vaguely familiar to you, there’s a reason for that: They’re the folks who created what’s frequently cited as the world’s first blue wine. Gik was formed several years ago by a group of Spanish entrepreneurs, who banded together with the goal of bringing a blue wine to the market. Their creation, Gik Blue, took two years to develop, which the BBC reports the company did with the help of some chemical engineers from the University of the Basque Country. From there, things proceeded quickly: The original launch occurred in 2015, although at the time, it was only available in Spain, and only via Gik’s online shop; in 2016, availability expanded to France, the United Kingdom, the Netherlands, and Germany, at which point the drink went viral; and in 2017, it finally arrived in the United States.

A variety of other blue wines have hit the market since Gik’s debut, including Vindigo, a turquoise-hued wine, and Blumond, a bubbly, blue, sparkling wine — but many of us (myself included) owe our knowledge of blue wine’s existence to Gik. So, in that sense, it really is the OG blue wine.

Gik, now branded as Gik Live!, has continued to develop unusual and Instagram-friendly drinks in the ensuing years, including a spicy red and a few wine/tea blends — but with their latest creation, they may have finally recaptured their early viral fame: Unicorn Tears capitalizes on the popularity of not one, not two, but four distinct, wildly popular trends.

First, there’s the name of the wine itself; unicorns have been deep in the middle of a Capital-M-Moment for several years now, and despite some challengers entering the ring, it still isn't showing any signs of slowing down. Then there’s the whole “millennial pink” thing — people can’t get enough of pink foods, clothing, drinks, and other items. Rosé, of course, makes up the third trend; it might be the middle of winter in the northern hemisphere right now, but the rosé-all-day life philosophy is still going strong. And lastly, we’ve glitter — because, yes, according to the previously mentioned press release, the wine includes “particles that make it sparkly.”

Despite Gik’s claim in the product copy that the secret to the wine is “an actual unicorn” kept in “a secret location,” from which tears are extracted via a “completely natural process,” that’s, uh, obviously a fiction. So what kind of grape is Unicorn Tears wine made of? That’s… also not clear. However, we do know that it’s a rosé, so it’s likely made according to one of three possible methods: The maceration method, in which the skins from the red grapes pressed to make the wine are allowed to sit in the juice while it ferments; the vin gris method, which uses a super short maceration time; or the saignée method, in which a small percentage of juice is bled off during the making of an actual red wine and further fermented into rosé.

Unicorn Tears’ unique color is achieved with a little help beyond just grape skins, though; according to the press release, organic pigments from raspberries add that extra dose of brightness. Meanwhile, the drink’s sparkle comes from “mineral pigments,” reports Vogue Espana. Appearance aside, it isn’t immediately obvious what the wine actually tastes like, but we can probably assume it’s pretty sweet: The aroma is described as fruity and somewhat reminiscent of candy, which screams “SUPER SWEET WINE” to me. It’s 12 percent alcohol, for the curious.

Although Unicorn Tears has only just begun a major advertising push via social media, the wine itself has actually been around for some time: Its first appearance on the @GikLive Instagram page occurred on May 10, 2018. “¡Nos habéis preguntado mucho por el vino de color rosa y aquí lo tenéis!,” the post read. “Está elaborado con auténticas lágrimas de unicornios criados en libertad. ¿No nos crees? Pruébalo en giklive.es y nos cuentas.” Per Google Translate, this message means roughly, “You asked us a lot about the pink wine and here you have it! It is made with real tears of unicorns raised in freedom. Do not you believe us? Try it on giklive.es and tell us.”

(I’m assuming that “unicorns raised in freedom” basically means that the unicorns in the wine’s fictional backstory are meant to be free-range. So, hey, at least it's ethical even in its imaginary world!)

The wine continued to make sporadic appearances throughout the summer, but once the fall/winter holiday season rolled around, it began popping up more and more frequently; indeed, Gik even offered a “Christmas edition” bundle, which included two bottles of Unicorn Tears and a bottle of champagne. The idea was for folks to pour half a glass of Unicorn Tears and top it up with half a glass of bubbly in order to make a festive holiday drink. This bundle is still available by the way, as are a package including both Gik Blue and Unicorn Tears and a “Tasting Box” full of a bottle each of Gik’s Blue wine, Unicorn Tears wine, the three wine/tea blends, and the spicy wine.

If you’re not interested in any of those bundles, Unicorn Tears is currently available on its own in packs of three, six, or 12 bottles via Gik’s website. A three-pack is 39 Euros; a six-pack is 70; and a full dozen is 118. That puts each bottle’s value at somewhere between 10 and 13 Euros — if you could buy them singly, which, alas, you can’t. Sorry.

You also, uh, can’t order Unicorn Tears from Gik’s U.S. site yet; the wine is currently listed as unavailable there. However, it does also note that it will be “soon in the U.S.!,” so at least we probably won’t have long to wait. Judging by its EU prices, we can probably expect a three-pack to cost around $45, a six-pack about $80, and a dozen around $135. Each bottle will probably be valued between $11 and $15.

If you live in the EU, you can order Unicorn Tears here; if you’re in the United States, keep checking back here to find out its availability. Get those glasses ready!