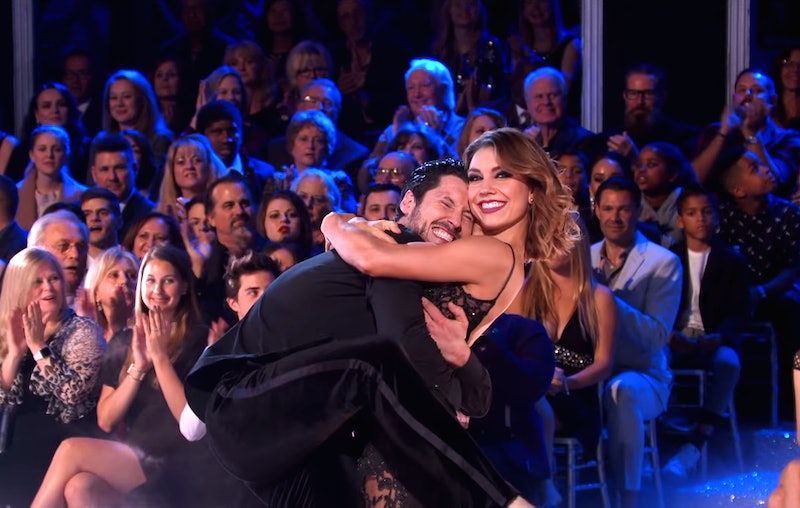 Although she's the reigning champ of Dancing With The Stars, Jenna Johnson now has even more of a reason to celebrate with her boyfriend Valentin "Val" Chmerkovskiy. Dancing With The Stars' Val and Jenna are engaged. The couple announced the news on social media Thursday, June 14. Based on their posts, Val proposed to Jenna in the romantic city of Venice, Italy. Jenna had told Entertainment Tonight that "time's a ticking" for an engagement and People reported that Val had hinted at a proposal in May when he replied to a fan's tweet about Jenna with, "I should def put a ring on it." Just about a month later, Val followed through on his tweet and the newly-engaged pair look beyond happy.

On Thursday, Val and Jenna posted the same two photos (with slightly different angles) from their Venice engagement. The 32-year-old Val simply wrote, "I can't wait to make you my wife" as the caption of the photos that show an ecstatic Jenna as he's down on one knee and then the pair kissing. In her post, the 24-year-old Jenna wrote about her Ukrainian-born fiancé:

"I knew the moment I met you, you were the man of my dreams and I wanted to be with you forever. Babychka Мой любовь thank you for making my fairytale come true today! Cannot believe I get to call you my FIANCÉ!!!! #engaged"

The talented pair met through Dancing With The Stars. Val has been a longtime fixture of the competition show, but didn't become a pro until 2011. He won his first Mirrorball Trophy with Rumer Willis in 2015 — and their pairing sparked relationship rumors. He then won again in 2016 with gymnast Laurie Hernandez. Jenna, meanwhile, started her TV dancing career on So You Think You Can Dance in 2013 where she made it to the top eight. She's appeared on SYTYCD since then (fans will never forget when judge Jason Derulo uncomfortably asked her out during The Next Generation season). And she was a troupe member of Dancing With The Stars before being promoted to a professional dancer for Season 23 in 2016. Although she's only been a pro for two seasons, she won when paired with figure skater Adam Rippon for DWTS: Athletes.

People reported that their love story started back in 2015 when the couple began dating on and off. As E! reported, there were rumors that Jenna and Val were dating in February 2016 when Jenna was a member of the DWTS dance troupe. At the time, a source denied that they were dating even though photos showed the pair getting close. In June 2017, Entertainment Tonight reported that they made their relationship Instagram official as they shared photos of a European trip together. So their engagement in Italy may hold a special meaning for them.

The couple has been official ever since and by August 2017, Val was proclaiming his love for Jenna publicly, ET reported. They also had a pretty special wedding to attend in the summer of 2017 when Val's older brother, Maksim "Maks" Chmerkovskiy, married a fellow Dancing With The Stars pro, Peta Murgatroyd. Val was the best man at their wedding in July 2017, so perhaps Maks will return the favor at Val and Jenna's wedding.

Back in December 2017, Val spoke to People about how happy he was with Jenna. "My life has changed because of [her]. And I find myself to be the best version of myself I've ever been. She's awesome," Val said. Val also said that he has baby fever (he's an uncle to Maks and Peta's baby Shai), but that he didn't want to disrupt Jenna's life with a baby just yet and that they would get married first.

With their engagement, Val and Jenna are one step closer to building their family together. But before that will happen, Dancing With The Stars fans should get excited for what is sure to be a gorgeous their first dance at the wedding.