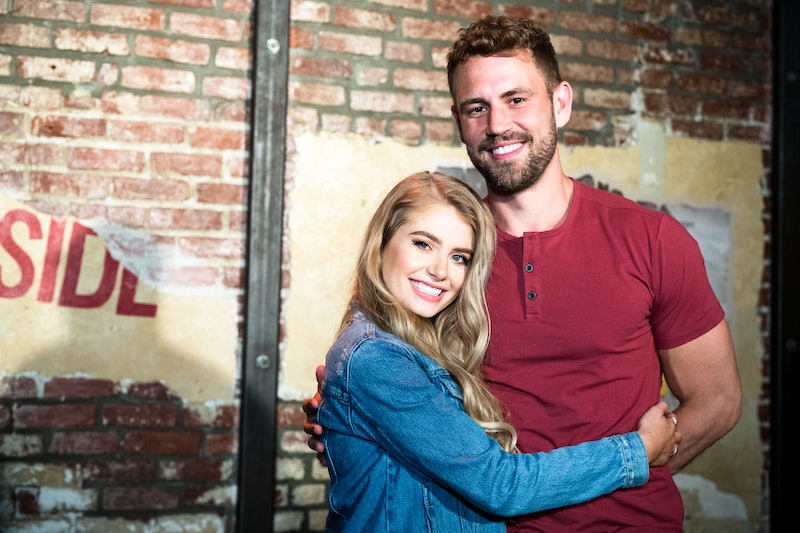 On a red carpet dominated by Hollywood’s biggest stars, Bachelor in Paradise alums Nick Viall and Demi Burnett took in the 2020 Golden Globes arm-in-arm. But don't read too much into it: the pair denied dating rumors as recently as November, after photos of the duo leaving Viall's Los Angeles apartment were posted on Reddit. Viall addressed the photos on his podcast Viall Files and clarified their relationship. "Demi is a close friend. She's a dear friend We've become very close," he said at the time. "I care very much about her."

Burnett and Viall have frequently appeared on each other's social media accounts in the past. On her Instagram stories Sunday evening, Burnett, who wore a light purple dress with matching stole, posted a short video with a white-tux-clad Viall in a car en route to the awards show. "Thanks for inviting me Nick," added Burnett, who split from fiancée Kristian Haggerty — to whom she got engaged during BiP Season 4 over the summer — in October.

"Our priority is doing what is best for us. With a heavy heart full of love for one another we have decided it is best for us to take a step back from our relationship. We ultimately want what is best for us in the long run and for us right now, that means being apart and growing individually," the two wrote in a joint Instagram statement at the time.

Viall also seems to be single at the moment. Despite a rumored romance with Rachel Bilson — the two hung out as part of a group last fall — Bilson walked the red carpet for the first time Sunday with boyfriend Bill Hader.

Viall and Burnett did, however, get to participate in something of a mini Bachelor Nation reunion on the red carpet. Wells Adams, who was part of the E! Team covering the stars' arrivals, also took time to pose with Viall.