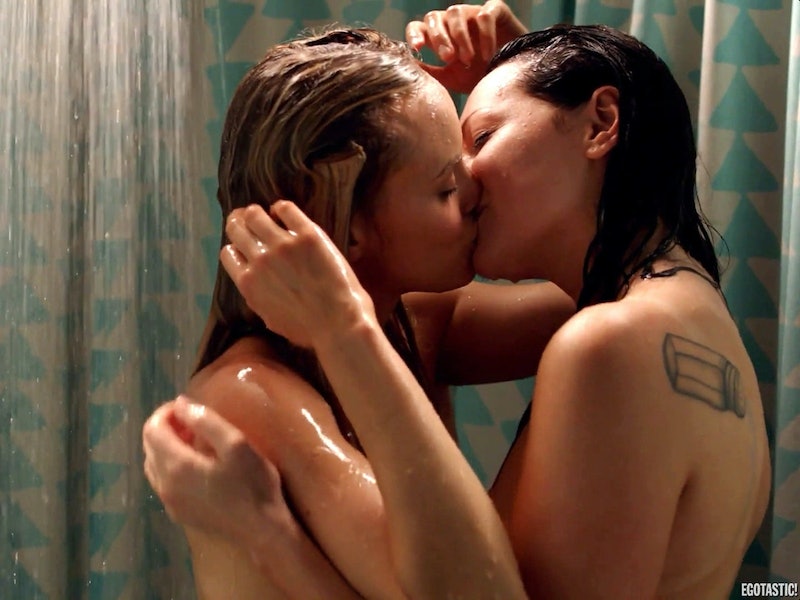 We’re always hearing that we could be having better sex, a better orgasm, or a better relationship. But how often do we hear the nitty-gritty of how we can actually better understand our deepest desires and most embarrassing questions? Bustle has enlisted Vanessa Marin, a sex therapist, to help us out with the details. No gender, sexual orientation, or question is off limits, and all questions will remain anonymous. Please send your sex and relationship inquiries to tips@bustle.com. Now, onto this week’s topic: what do lesbian dreams and fantasies really mean?

Q: “For the last few weeks I have been experiencing lesbian dreams and fantasies, and I'm not sure why. I am straight. But thinking about kissing another girl actually makes me feel more comfortable than thinking about kissing another boy. And whenever I look at pictures of girls I think I feel attracted to them. But in real life, I don't find other girls sexually attractive, I think, and I don't think about kissing them or being in a relationship with them. I'm actually scared, because I don't want to be lesbian/bisexual, I know I'm straight, and honestly this have been eating me up. What does this mean? Is it just hormones? Am I going through a phase? Can books influence these fantasies? Am I secretly a lesbian without knowing it?”

A: Thanks for your question! I know that fantasies can be really confusing sometimes, so I’m glad you reached out. There are a couple of different possibilities, so here are six important things to know about lesbian fantasies when you think you're straight.

The first thing I want to share with you is that same-sex fantasies are one of the most common fantasies, especially for women. It typically falls within the top three to five most popular fantasies. So my most basic answer to you is that this is totally normal, and you’re not alone!

It’s perfectly normal to have a fantasy about something that you don’t want to do in real life. This is the case for non-sexual fantasies too. Our brains like to wander off into weird territory sometimes. I’ll never forget the time one of my clients told me they had walked by a dog on their way to my office, and briefly fantasized about kicking it. This person was a total dog lover, and they were horrified that their brain would come up with that mental image. They were worried it was a sign that they were some sick, twisted, secret dog abuser. But I assured them, just as I’ll assure you, that sometimes our brains just picture things on their own. Those images don’t necessarily mean anything, and they’re certainly not “evidence” of secret, underlying desires. (Just to be clear, I’m not equating kissing a girl to kicking a dog; this is just a funny example!)

... And That Fantasies Can Have Outside Influences

There isn’t a whole lot of research about why people have certain fantasies. Your hormone levels don’t necessarily affect the content of your fantasies, but you can definitely feel hornier at certain times of the month. If you’re at the right time in your cycle, you could be turned on by things that don’t usually seem that appealing to you.

Stuff can also pop into your fantasies based on what’s going on around you. It’s like when things from your daily life surface in your dreams. If you saw something on TV or in a movie, or read about it in a book, it might find its way into your fantasy. In particular, if you were reading about or watching lesbian plotlines, your brain is naturally going to start pondering what it would be like if you were personally in that situation.

Some People Are Attracted To Fictional Characters

You also mentioned in your email that you feel attracted to women when you look at pictures of them, but not when you see them in real life. It also seems that you’ve been reading a lot of books lately. I wasn’t totally clear about this from your email, but it seems that you might also be having fantasies about some of the characters in the stories.

One important point that I wanted to bring up is that there are people who feel more attracted to fictional characters than they are to real-life human beings. These can be fictional characters from books, movies, TV shows, comics, or even your own imagination. Some of this subset of people identify as asexual, meaning they’re not interested in sexual relationship with human beings. You get to define your sexuality however you want to define it, but I wanted to point out this possibility. I would highly recommend popping over to AVEN, the Asexuality Visibility Education Network, to learn more about the various subsets of asexuality. At the very least, I hope it makes you feel less alone to know that you’re not the only person out there who has fantasized in this way.

Remember You Always Have A Choice What To Pursue

I don’t think there’s anything to be afraid of when it comes to being interested in women (more on that in a minute), but it's important to note that you can keep fantasizing about it regardless of whether you decide to try it in real life. If you want to experiment with women, you can do that. If you don’t want to, you don’t have to. If you try experimenting with women once and realize it’s not for you, you don’t have to hook up with a woman ever again. I know I’m being a little redundant here, but I just want to make a point — the real life version of you is the one in control here, not the fantasy version of you.

Be Open To Your Fantasies

So, I know I’ve been saying that just because something is a fantasy doesn’t mean it’s something you necessarily want to do in real life. That’s totally true. At the same time, I found myself wondering why these particular fantasies seem so scary to you.

You mentioned in your email that the thought of kissing a girl feels more comfortable to you than the thought of kissing a boy. Why should something that feels so comfortable be so scary? Later in your email, you directly said that you’re scared of the possibility of being lesbian or bisexual. I know that we still have a long way to go to make being bi or gay fully safe in this country, and that sexuality in general can be a scary topic sometimes, but what exactly are you afraid of? Are you worried about your family or your religion not accepting you? Do you have your own biases or judgments against being bisexual or gay? I think it’s worth taking the time to examine your feelings here.

There’s no denying that it’s more challenging to be bisexual or gay than it is to be straight, but it’s not fair to be untrue to yourself about one of the most basic aspects of your identity. It’s important to be open to, curious about, and willing to explore your own sexuality.

Wishing you the best of luck!