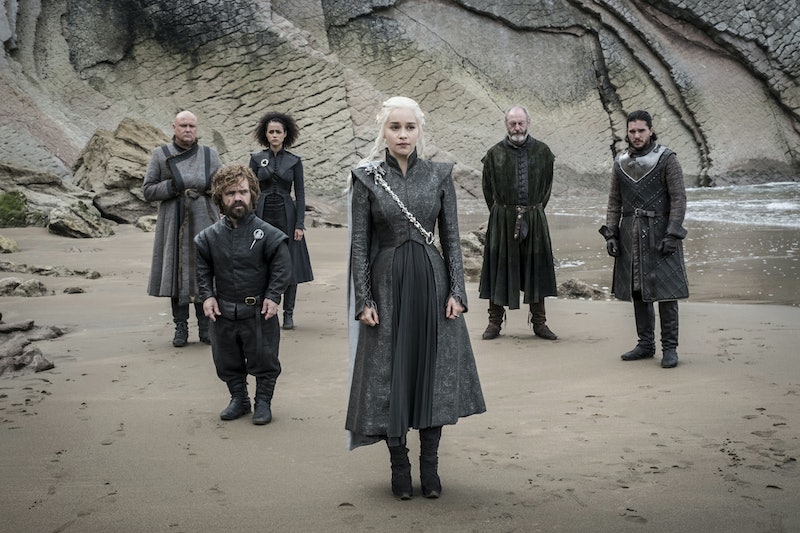 Game of Thrones Season 8 doesn't premiere until 2019, which means there's a lot of time left for spoilers to leak. But they won't be leaking from the cast. Even actor Emilia Clarke doesn't know how Game of Thrones ends, and if she doesn't know, then it's likely that no one does. After all, HBO announced the series is filming multiple endings — eight in total — for Season 8. They obviously won't be able to use them all, but it's kind of a brilliant move on the showrunners' part.

The actor spoke at length to The Hollywood Reporter, and discussed everything from her education to the projects she didn't take on (including Fifty Shades of Grey, whoa) to what's in store for Daenerys Targaryen. The one thing the show's Khaleesi doesn't know for sure is exactly where she'll end up:

Recently, Clarke revealed that she has two Instagram accounts to prevent her from accidentally spilling Season 8 beans to fans, so that's probably for the best. Otherwise, it could be easy to slip up.

Though Clarke loves the show and the fan relationship to it today, she reportedly had no idea what she was in for when received the opportunity to audition. A previous Game of Thrones pilot starring a different actor had already been shot and scrapped by the time Clarke got the chance to try out for the role. She said that only made her hungrier for the part — "ecstatic" even — so she prepared for the meeting by reading everything on Wikipedia. Not the book series. Yes, Clarke actually got ready for her GoT audition by reading the books' Wikipedia pages. She also told THR that she "danced the funky chicken" for HBO executives, which is a wonderful image. As is the concept of Game of Thrones stars having to say "I don't know!" when asked for spoilers in every single interview between now and the Season 8 premiere.

Filming that many endings for the show might seem excessive, but it's the safest option. If something does end up leaking, no one from the set will even know if it's the truth. That would curb the whole Game of Thrones Season 8 internet rumor mill and threat of piracy thing. HBO would also be able to change the ending to something else fans won't be expecting. Plus, if the cast doesn't have the answers, they can't spoil anything anyway — even accidentally. At worst, they can drop some information that eventually won't make it into the show. That relieves some of the pressure on the cast while protecting Game of Thrones' secrets. It's perfect, even if it throws the actors for a loop a little bit in the interim.

However, there is another way of looking at all of this. If Game of Thrones films eight different finales, and none of the cast members know how it ends for real, it's possible that the Season 8 finale of Game of Thrones will be its bloodiest yet. If it can turn out eight different ways at a minimum, and there are at least as many contenders for the Iron Throne — even assuming they go for the bleak ending, where the Night King's army wipes out humanity — that means a lot of them could die in the various finales. Most of them, even.

If each ending the series films is similar enough to make sense for the show and unique enough to confuse the cast, that proves a lot of them have to make it at least close to the end. The individual finales' plot lines will have to be similar enough to the rest of the show, and put enough characters in consistent positions, to result in an ending that makes sense any of the eight ways.

So will it come down to one battle that goes wrong? Is it a last character left standing situation? And when they say HBO has eight endings planned, do they mean eight 90-minute episodes, or just final scenes? Maybe not even the Game of Thrones cast knows for sure.