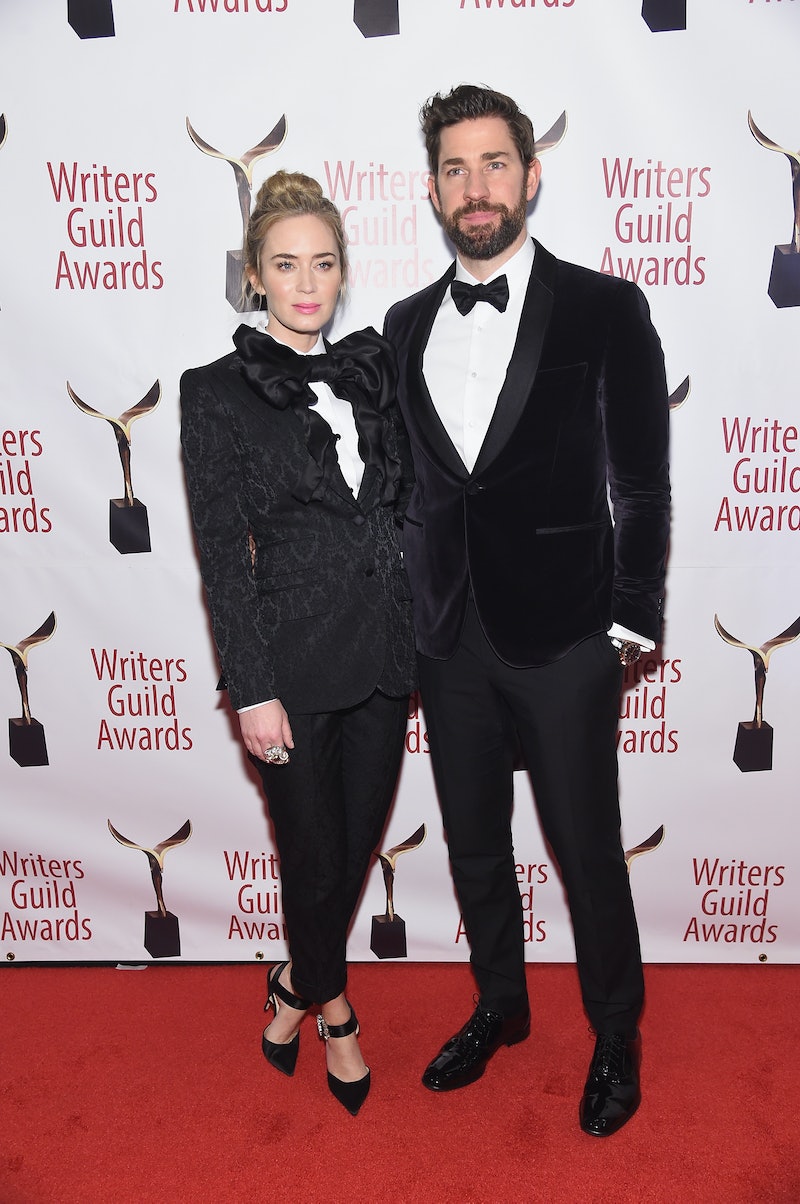 In case you were wondering which Hollywood couple got the award for most adorable, it's definitely Emily Blunt and John Krasinski in matching suits and only in matching suits. Okay, so they're pretty cute all the time, but at the Writers Guild Awards on Sunday, the pair appeared in tuxedos together, and the twinning moment was basically one that made the collective internet let out a loving sigh.

Just in case you missed the film when it debuted last year, Krasinski and Blunt starred in A Quiet Place together, and it's the reason they were attending the award show on Sunday night in New York. Krasinski was actually nominated for his work writing the screenplay, and as both his wife and co-star, of course Blunt attended the ceremony with him. While the film certainly didn't really elicit any swooning moments — it is a horror film, after all —, the pair's matching suit ensembles when they attended the show together certainly did.

According to Harper's Bazaar, Blunt chose a floral patterned jacket with matching pants by Dolce & Gabbana and paired the suit with a massive (and amazing) bowtie as well as a pair of closed-toe pointy pumps with a thick ankle strap and sparkling buckles. As for Krasinski, he chose a velvet jacket, black pants, and a bow-tie that was markedly smaller than his wife's.

Someone needs to start a petition for more matching suit ensembles from Hollywood couples. Just imagine Kim Kardashian and Kanye West in matching Yeezy suits, or Justin and Hailey Bieber in Drew joggers. There's an endless world of possibilities.

While ultimately, Krasinski didn't go home with the award (the honor went to Bo Burnham's Eight Grade), he and Blunt certainly seem to have won the red carpet.

Of course, the couple's appearance at the Writers Guild Awards was far from their first time looking incredible on a red carpet this award season. Both Blunt and Krasinski have been nominated for multiple honors in 2019.

Alongside his nomination at the Writers Guild Awards, Krasinski has also been nominated for a plethora of other awards for the A Quiet Place screenplay according to his IMBD page. Plus, he's also had an acting nomination thanks to his work on Amazon's Jack Ryan at the Screen Actors Guild Awards. It was at the SAG Awards that he and Blunt both had nominations.

While Krasinski was nominated for Jack Ryan, Blunt was actually nominated not once but twice for her work in both Mary Poppins Returns and A Quiet Place. Blunt ultimately took home a trophy for her starring role in A Quiet Place, and she basically made the world let out a sigh against when she thanked Krasinski on stage.

If you were looking to crown a cutest couple in Hollywood, John Krasinski and Emily Blunt's matching suits may have just won them the title, at least when it comes to their sartorial choices. Here's hoping for more celebrity couples twinning on the red carpet.