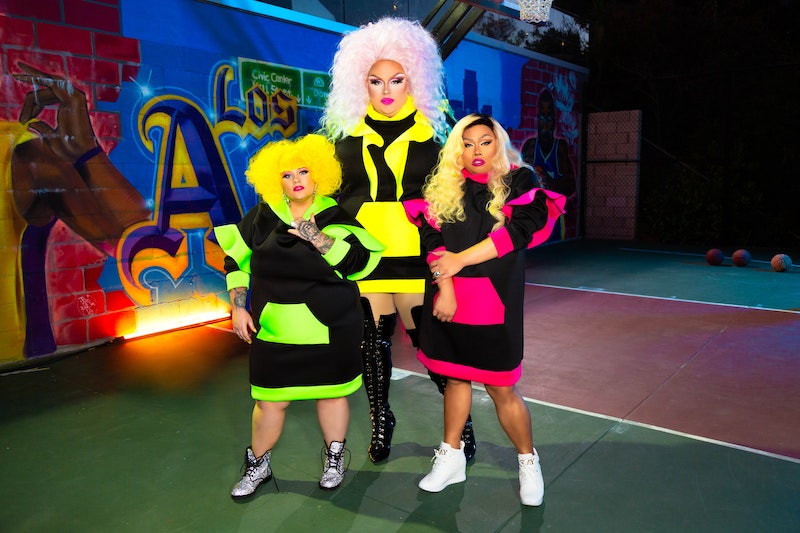 The evolution of body positivity in the music industry has come leaps and bounds in recent years due to trailblazers who use their lyrics as a message to the masses. Now, following the path of some of the greats, a RuPaul's Drag Race favorite is premiering her ode to body positivity with a new music video. Eureka O'Hara's video for "Pretty Hot and Tasty" (P.H.A.T) was inspired by pop culture's current reigning queen of self-love and body positivity, Lizzo. And while the Drag Race Season 10 finalist hopes this video has you dancing like the "Truth Hurts" singer herself does every day on Instagram, she really wants it to make you (yes, you) feel sexy.

"[Lizzo] is finally sexualizing thick bodies," Eureka tells Bustle in a recent interview timed to the premiere of the "Pretty Hot and Tasty" video. "People have been giving her issues lately with her having half-naked photos and going the sex appeal direction." But if it was anyone else, Eureka points out, "you wouldn't even think twice about it."

In a recent interview on NPR's Fresh Air, Terry Gross called Lizzo's mostly nude Cuz I Love You album cover "a really bold statement" for women. "Yeah, but are you only saying that because I'm fat?" Lizzo asked Gross. "I feel like if I were a thin woman, maybe that wouldn't be the case." Lizzo's response to Gross' comment is an energy Eureka aspires to have in her video: it's not about fat women being "big and funny," she says. "It's about being big and fierce."

The idea of being pretty, hot, and tasty is not about size, it's a way of thinking.

Some members of the body positive community, like Lizzo, have chosen to embrace the word "fat" as a part of them. Eureka wants to redefine it in a way that better empowers her and hopefully others, too. That's where "P.H.A.T" comes in. The track completes a trio of singles she has released since her Drag Race exit that all share a body-positive message. And although she hopes to inspire "thick'ems," as she calls them, she makes it clear that her music isn't exclusively for one audience. It's for everyone.

A crew of fellow drag queens and influencers — namely Lardi B and Jiggly Caliente, who both rap on the track — joined the video to help Eureka bring its inclusive message home, not just with regards to body type, but by making it intersectional. "I'm a gender neutral person," she says. "And then we have a female rapper, and then we have a trans female rapper. And I really just wanted [the video] to be gender non-conforming."

She also wanted the video to show love for her Drag Race sisters, so she sprinkled it with subtle nods to their merchandise and other references to their work. In the opening scene she sings from her apartment's living room, which is decorated from top to bottom in Drag Race memorabilia: A bag with the phrase "Tote-ally Nina West" hangs on the wall, a small, Barbie-esque Manila Luzon doll sits on the shelf to her left, and Trixie Mattel and Trinity the Tuck appear on the TV screen.

"[The video is] just an homage to all these girls who have touched my life in some way and who inspired me," she says. "Silky Nutmeg Ganache gave me [the dress] to wear; Farrah Moan gave me [the hair] to wear ... Latrice Royale gave me [the gloves]. Everything that I had on in that opening scene and the things around me were given to me from sisters of mine from the show that have touched me [emotionally] in some way."

Thanks to all of her support from fans and sisters, and her ever-growing sense of self-love, Eureka has her sights set on some big goals for the coming year. That may or may not include competing on Drag Race: All Stars Season 6. "I could see potentially being a part of All Stars 6. All Stars 5 I am not going to be a part of... I'll just be honest, I needed time," she says about her multiple season run. The good news? "I definitely see an All Stars in my future."

Until we are blessed to hear Eureka's heels clack through the werkroom doors once again, prepare yourself by listening to her music (and Lizzo's!) on repeat. There's no doubt that, together, their self-loving powers will help you embrace your inner pretty, hot and tasty.