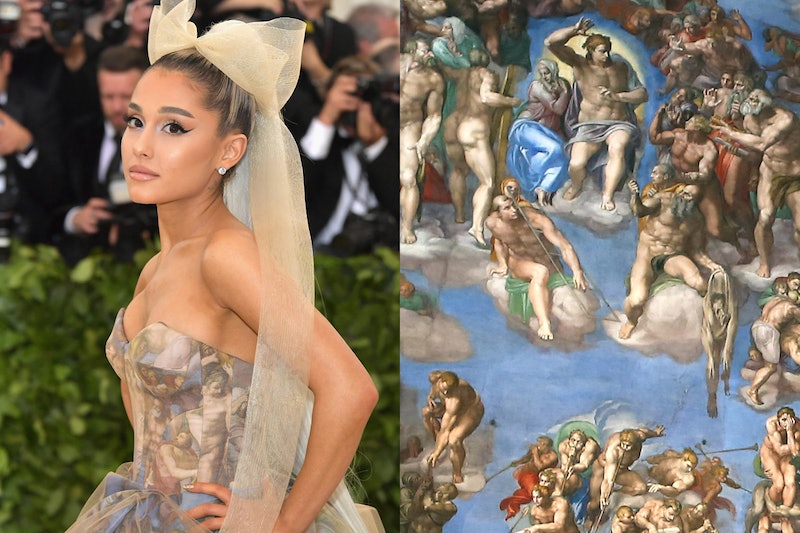 Monday night's Met Gala was a star-studded soiree, but it wasn't just Hollywood's most famous celebrities that made appearances. Some of religious art's big hitters also kind of walked the red carpet. Every work of art referenced at the 2018 Met Gala was reworked and sometimes reinterpreted to suit stars' styles, and honestly, they may have been some of the best looks of the night.

Why was art so integral to the event? It's all about the theme. The 2018 Met Gala and following art exhibit exhibit is themed "Heavenly Bodies: Fashion and the Catholic Imagination." With so much of art's most classic pieces coming from Catholic masters (and some on display at the Met already), it makes sense that their works would appear on the star's bodies (heavenly ones at that).

While there were religious allusions throughout the event, like halos, tears of the stigmata, and colors of gold, red, and blue, not everyone chose to incorporate famous religious works of art. For those who did, however, the choice was nearly universally on theme. While some of the attendees appear to have chosen not to take the Catholic theme too far into their sartorial choices, those who did were some of the night's most beloved.

Model Jasmine Sanders was one of the first to set foot on the carpet. Her H&M gown may have been reminiscent of everyone favorite book-loving Disney princess Belle, but it wasn't the only parallel that could be drawn.

According to one Twitter user, the gown can also be seen as an allusion to Shrine of the Virgin, a piece currently on display at Metropolitan Museum of Art. The user explains that the golden hue and and front split can both be seen as an homage to the piece.

It wasn't the only art-inspired moment for Sanders, though. Twitter account Tabloid Art History gave an insight into some of the most obvious, and Sanders participated in yet another artist homage.

On the carpet, Sanders was joined by other celebrities wearing H&M to the gala, and together, it seems as if the brand may have intended to give an ode to Botticelli's Primavera.

Then, there was Zendaya's overt but incredible Joan of Arc-inspired look. While the ensemble could have simply been a reference to a historic person, there's also a comparison to be made to Albert Lynch's Jeanne D' Arc.

Kate Bosworth's jaw dropping look may have also been part of the secondary theme of artistic recreations. Her inspiration could have come from Statue of the Weeping Madonna.

Perhaps one of the most obvious allusions of the night was Lana Del Rey's Lady of Sorrows look. The pierced heart was just dramatic enough for the Met Gala but also appeared to take inspiration from Our Lady of the Seven Sorrows.

While Lana Del Rey's ensemble is quite compelling, Ariana Grande's Vera Wang gown may just be the most recognizable piece of religious art that was adapted into fashion on the Met Gala red carpet.

The "No Tears Left to Cry" singer wore a stunning ball gown with what seemed to be a watercolor recreation of the Sistine Chapel. In fact, even before appearing on the carpet, Grande was teasing her gown's inspiration on Instagram.

Unlike 2017's Met Gala where many attendees chose not to abide by the theme, 2018's gala seemed to the complete opposite. If you want to see more of the celebrity looks that appear to have taken inspiration from famous works of art, Tabloid Art History breaks down all of the allusions.

So, while not all celebrities took classic religious art and adapted it into their clothes (Rihanna dressed as a sexy pope, after all), those who did may just be named some of the most accurately dress of the evening.