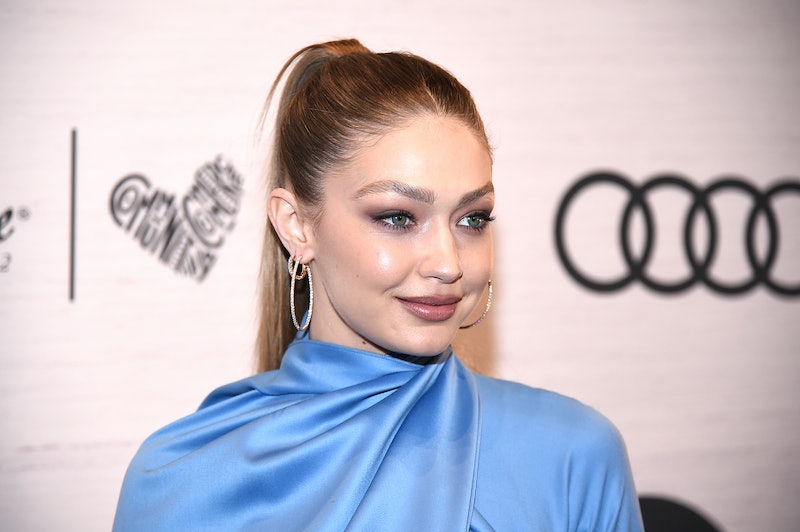 If you're a follower of celebrity accounts on Instagram, you probably heard the news that April 23 was Gigi Hadid's birthday. The famous model turned 24 and friends showered her with well wishes on social media, but she also seems to have had a massive celebration. Judging by the photos that have been circulating, Gigi Hadid's birthday party was denim themed, and most of the guests wore Canadian tuxedos that actually looked amazing.

In case you haven't heard of a Canadian tuxedo, it's basically when you wear head-to-toe denim. Think Justin Timberlake and Britney Spears on the red carpet. That's a Canadian tuxedo. Apparently, the full denim looks were the theme of Hadid's party. Sure, maybe you think Canadian tuxedos have no place in this world. You're very likely not alone, but just wait until you see the looks Hadid's celebrity friends wore to her party. You may start to rethink the amount of denim you're rocking on the daily.

As for the guest list at Hadid's birthday party, it was understandably star-studded. Of course, her sister and fellow model Bella Hadid attended as well as model friends like Ashley Graham, Olivia Culpo, and Precious Lee. Hadid's mom and former cast member of Real Housewives of Beverly Hills Yolanda Hadid also stayed on theme for the night. You know you've got a good support group when they're willing to wear head-to-toe denim for you.

What did some of Hadid's guests wear? Get ready for some serious denim overload.

Bella's look may have been one of the most on-theme of the night. Not only is the younger Hadid sister wearing a full-on denim corset, but she's rocking jean cargo pants from Dickies Girl and a matching jacket, too.

Ashley Graham in this Levi's denim shirt dress and thigh high boots? A chef's kiss for you, Ashley Graham. The curve model killed this look, and the more vintage wash is so on trend.

Ariana Grande, is that you? Culpo gave some serious Grande vibes with her knee high boots and off-the-shoulder, zip-up jacket. Plus that necklace is serious "7 Rings" chic.

Of course, Gigi's mom Yolanda Hadid was at the party, and like her daughter Bella, she seriously crushed the theme. In a full dark wash denim suit, complete with a vest, Hadid was serving a more '70s take on the Canadian tuxedo.

Hadid isn't alone in her love of a themed birthday. Other celebrities have taken to throwing celebrations that require guests to dress a certain way. Remember Chrissy Teigen's James Bond themed party for husband John Legend? It wasn't even the first time the Time 100 member had throw such a shindig. Back in 2017, her own birthday party was Pan Am themed and so retro cool.

While Gigi Hadid's birthday party may not have been quite as epically put together as Teigen's Pan Am theme or Legend's Bond theme, the one thing it did prove was that she's got some seriously good friends. A friend that will wear head-to-toe denim for you is a keeper.