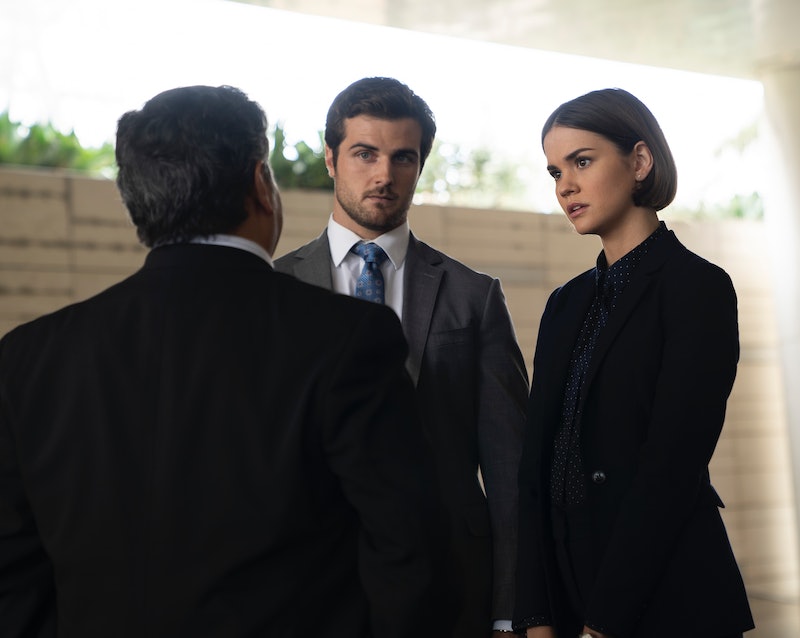 Every twenty-something thinks that he or she has it all figured out but rarely is that the case. Callie and Mariana came into Good Trouble Season 1 very, very green, and now, at the Season 1 finale of Good Trouble, they are… still green. Your twenties are for learning and growing, and when it comes to Callie, says Good Trouble executive producer and star Maia Mitchell, she has a long way to go. “It's that thing of like when you’re in your early-to-mid-twenties, you have these adult responsibilities but you also are still kind of a kid and it’s hard to see yourself as an adult, navigating the adult world,” Mitchell tells Bustle. Luckily for Callie, Season 2 is right around the corner.

Callie has grown in leaps and bounds over the course of Season 1 — she’s clerking for a federal judge. She’s working on a huge police brutality trial. She’s met a new man that she could see herself being with… and she’s managed to mess basically all of it up, getting fired from the case, putting herself in jeopardy with her judge, and kind of dating two guys at once.

The Season 1 finale ends with Callie torn between her moral center and her job, and standing right between Jamie and Gael, her two potential love interests. Many of the other characters got at least some semblance of a little bow tied up in their storylines, and Callie did not, which, Mitchell says was very Callie.

“For Callie, it’s typical for her to never really get much closure. I mean, she’s got a bunch of huge decisions to make, she’s at a real crossroads with both her work situation and her personal life, and… she’s sort of going back to her old ways,” Mitchell explains. “You know, she’s really impulsive, and reckless, and almost self-sabotaging.”

We see this self-sabotaging nature especially in Callie’s career arc over the course of the season — Callie seems to lack the “when” button, and she’s always pushing and pushing, as she did with Judge Wilson and the Jamal Thompson case. Eventually, the rubber band snapped, and Callie was taken off her passion project. If Mitchell were in Callie’s life, she would tell her to cut the cord and go find something else.

And speaking of being single, Callie is currently torn between two men — Jamie, the hunky corporate lawyer, and Gael, the hunky artist. “I think she should decide [between the two of them], especially on Jamie’s part just because he’s a little more of a traditional dude,” Mitchell says, “and I don't think it’s really fair to string these guys along.”

The writers must love the fact that Callie’s life is a tango between different worlds right now, because in the Season 1 finale, they made her do a literal tango with Jamie and Gael and Malika and Judge Wilson. This was a surprise to Mitchell and her co-stars.

“I remember I got a text saying like, ‘uh, how are you at the tango?’ I mean, I’ve done some musicals before, I was a dancer when I was a kid, very out of practice,” Mitchel laughs. “[Our choreographer] kind of knew how to work with me already, and most of it really is just a confidence thing.” Heck, even Tommy Martinez, who plays Gael, and Beau Mirchoff, who plays Jamie, were able to pull it off.

“We practiced in between scenes and everyone really pulled it together,” Mitchell says. “Super, super proud of our boys. They were both not dancers, so I wish we could show you some behind the scenes videos of rehearsals!”

Season 1 ended with a dance, but luckily for Good Trouble fans, Season 2 is really just around the corner — it premieres, according to TVLine, on June 18. While all of the other characters on the show have their problems, Callie’s are most apparent — it would be nice to see her make some choices for a change, huh? Mitchell says they’re coming.

“You’re definitely going to see Callie making some actual decisions, like taking my advice [from earlier], so that’s good and satisfying,” Mitchell says. “I'm a fan of Callie, and I’m always rooting for her. You’re going to kind of see her putting both feet in the door in terms of her work situation and her relationships.”

For now, fans will have to wait until Good Trouble Season 2 to see Callie, Mariana, and the rest of the characters “come into [their] power” and make strides in their lives. Says Mitchell, “It’s just great to watch it unfold.”