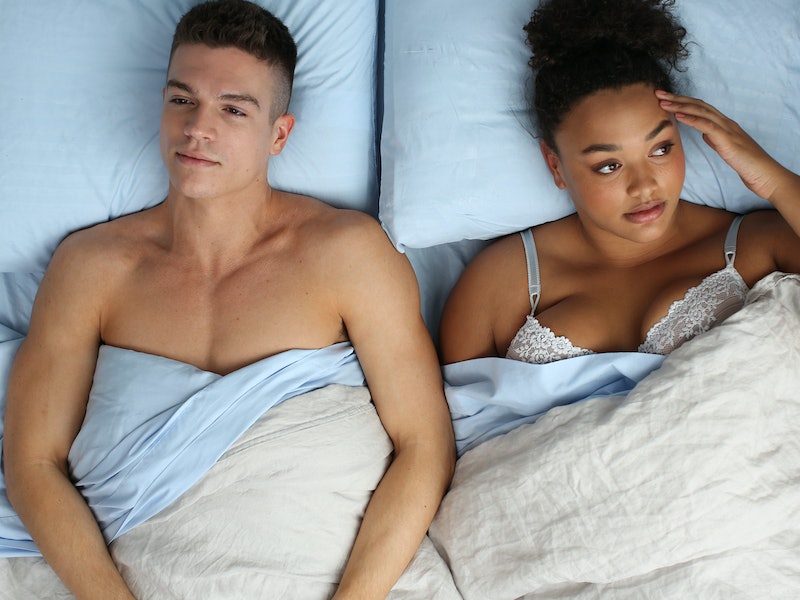 We’re always hearing that we could be having better sex, a better orgasm, or a better relationship. But how often do we hear the nitty-gritty of how we can actually better understand our deepest desires and most embarrassing questions? Bustle has enlisted Vanessa Marin, a sex therapist, to help us out with the details. No gender, sexual orientation, or question is off limits, and all questions will remain anonymous. Please send your sex and relationship inquiries to tips@bustle.com. Now, onto this week’s topic: harmful sex myths that you need to stop believing now.

Q: “I never got sex ed in school, and sometimes, I worry that even though I've been having sex awhile, I still don’t know that much about sex. I’m sure I believe plenty of stuff that isn't true. As a sex therapist, what are some of the biggest myths about sex people seem to fall for? And what's the truth behind those myths?”

A: Thanks for the question! I think it’s awesome that you’re putting some time and thought into your sex life. I have a lot to say on this topic, as you might imagine! I could probably come up with about 50, but here are the seven most harmful sex myths that I see in my sex therapy practice.

If there’s one myth that I think is more pervasive — and more dangerous — than all others, it’s this one. In one way or another, almost everyone believes that great sex should just happen “naturally.” We think we should have perfect chemistry with someone the instant we meet them (so much so that many of us will end relationships if that chemistry is not immediately apparent). We think we should naturally continue having great sex throughout the course of a long-term relationship. Having to put in any sort of effort is seen as a sign that something is “broken” or “not a good fit.”

The Truth: In reality, having consistently good sex requires consistent effort. It often takes time to develop chemistry with someone new. It takes effort to continue prioritizing your sex life with your significant other. Even your relationship with your own sexuality takes effort — you have to learn how to overcome sexual shame and embarrassment, learn what you like, and learn how to communicate.

The Myth: I’m Not Normal

This is the other biggie. Everyone worries that they’re not normal when it comes to sex! Whether it’s about the amount of sex we’re having, our specific sexual interests, our sexual challenges, our bodies, or even something completely random, we’re all afraid that something’s wrong with us, our relationships, or our sex lives. I can’t tell you how many emails I get that essentially boil down to the question, “am I normal?”

The Truth: When we ask, “am I normal?” what we’re really asking is, “is it OK for me to do/like/want this?” My answer to that is a resounding yes! As long as everything is taking place between consenting adults, you’re fine. Seriously. I don’t like using the word “normal,” because it implies that we should all be the same. Sexual identities and behaviors are so diverse, but that’s what makes sex so fun! If we all liked exactly the same thing, at exactly the same time, in exactly the same way, sex would be incredibly boring.

The Myth: My Partner Should Be Able To Intuit How To Get Me Off

This myth is a variation on the “Good Sex Happens Naturally” myth. I typically see this from women. A lot of us ladies want our partners to magically know exactly what we need to get off. Sure, that would be nice, but it’s about as realistic as finding your knight in shining armor.

The Truth: I think a lot of women feel this way because of the way society treats female sexuality. We’re taught to be ashamed of our bodies and our sexualities, so most women feel too embarrassed to explore their pleasure. But that’s some serious societal BS. Every person out there needs to — and deserves to — take responsibility for their own pleasure. You need to learn what your body likes by experimenting and practicing. But this isn’t a bad thing; learning how to get yourself off is one of the most empowering and enlivening experiences you will ever have!

The Myth: Women Should Be Able To Orgasm From Penetration Alone

This is a variation on the above myth, but it’s harmful enough to warrant its own paragraph. There are still so many men and women out there who believe that women should orgasm from intercourse, without any other stimulation. This myth leads so many women to feeling insecure and broken, and can put a lot of unnecessary stress on relationships.

The Truth: The clitoris is the center of the universe for female orgasm. Whether you’re stimulating it externally or internally, the clit needs plenty of attention if you want to have an orgasm. It’s just the way the female body works. It’s not something we should be ashamed of!

The Myth: My Brain Should Be Able To Control My Body

Every person out there has had the experience of their body not doing what their brain wanted. Men might have a hard time getting erect, or might orgasm too quickly or not at all. Women can struggle to get wet, or have a hard time reaching orgasm. And those are just a few examples. People get unbelievably frustrated when their bodies don’t respond the way they want them to, and they end up lashing out at their bodies, creating even more negative feelings, anxiety, and — you guessed it — more "performance" issues.

The Truth: Our bodies have minds of their own! They can’t be bullied into “performing” like robots. We need to normalize “performance issues,” and learn to see them as an expected part of our sex lives. We also have to be gentle with our bodies, and develop relationships with them. This is obviously a huge topic, but here's a good place to start.

The Myth: Men Have Higher Sex Drives Than Women

This myth is so dumb, but so pervasive. It just won’t go away.

The Myth: Sex Inevitably Gets Boring

Now this is an interesting one. Even though most people seem to believe that sex shouldn’t require any effort, I also see a lot of people who are resigned to the fact that a long-term relationship will inevitably get boring. We tell jokes about the honeymoon being over, and the spark being gone. People seem to think that there’s no way to sustain chemistry when you’re in a long-term monogamous relationship.

The Truth: Sure, there’s nothing quite like the honeymoon period with a brand new partner, but you can have a hot and active sex life throughout the entire course of your relationship! In fact, lots of couples find that their sex lives can improve the longer they’re together. They develop more trust in each other, get more comfortable communicating, and explore new things. As long as you’re willing to keep putting in that effort, there’s no need to feel hopeless.