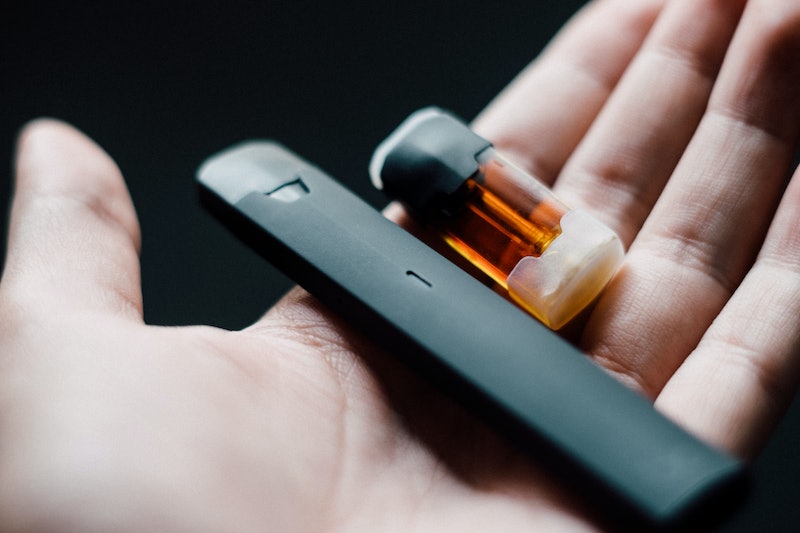 Whether picking it up as a hobby, or using it as a replacement for cigarette smoking, there are all sorts of reasons why someone may consider starting to vape. But the reality is, it comes with a whole host of side effects and health risks. And that's why some experts say any amount of vaping isn't a good idea.

This flies in the face of what many people see online, with major influencers on social media promoting vape products, without mentioning the dangers involved. This trend, according to Los Angeles Times, prompted the Food and Drug Administration (FDA) to send warning letters to four major companies who have paid social media influencers to mention their products, in an effort to reduce the amount of underage e-cigarette users.

Sadly, vaping-related deaths, mostly among young people, have been on the rise, with experts pointing to a lung disease that resembles a rare form of pneumonia that may be caused by vaping, according to CNBC. The Centers for Disease Control and Prevention (CDC) and the FDA have even recommended that people avoid all vaping products.

"Smoking or vaping in itself is inherently unsafe," Dr. Lawrence Weinstein, chief medical officer at American Addiction Centers, tells Bustle. "Each time an individual inhales that substance into their lungs, an adverse reaction may occur." And due to the current lack of research related to vaping, "the degree of severity, and whether it’s long-term or short-term, is unpredictable," he says.

It isn't even possible to know for sure what's in e-cigarette juice, but typically it's "composed of propylene glycol, solvents, flavor, and may or may not contain nicotine," Dr. Sherry Ross, MD, OB/GYN and women’s health expert at Providence Saint John’s Health Center, tells Bustle. And some flavors may be more harmful than others.

Some flavors are also more appealing, especially to younger users who might not be into the idea of smoking a traditional nicotine flavor. Experts say they're more likely to go for fun flavors, which is why the FDA focused in on ones like Watermelon Patch and Strawberry Kiwi, according to Los Angeles Times.

"While vaping poses many of the same dangers that traditional cigarettes do, as well as specific dangers of its own, the consensus right now is that it is a moderately safer alternative," Weinstein says. "What some fail to realize is that ‘safer alternative’ does not equal safe." That said, here are the health risk to know about vaping, according to experts.

This article was originally published on July 25, 2018