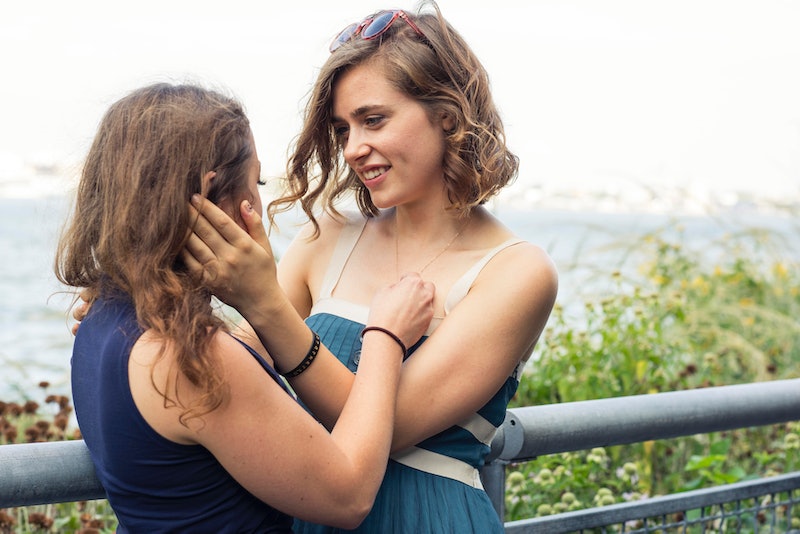 If you're single and dating, chances are that you've been on your fair share of online dates that can best be described with one word: mediocre. Sure, bad dates are inevitable, but that doesn't mean it's impossible to have a meaningful date with someone you met online. But what's the difference between a date that's meaningful and one that's mediocre?

"I think everyone has a different interpretation of meaningful, but in general, I think that a date stands out when you feel like you've learned a lot about someone in the short amount of time that a date provides," Amica Graber, a relationship expert for the background checking site TruthFinder, tells Bustle. "Maybe you discovered that you share a similar sense of humor, or the conversation was a rapid-fire exchange, rather than an hour's snoozefest. Many things can be meaningful, but getting a generous glimpse of someone's personality is really the goal of any first date."

And, while it's nearly impossible to guarantee you'll never have a bad date again, many dating apps are now doing their part to set you up with more quality matches from the get-go — the most recent example being Hinge's new feature, "Most Compatible". Its goal is simple: to get you off the app and onto a great date. How you ask? By using their Nobel Prize-winning algorithm and advanced machine learning to curate one match per day who they think you're most likely to click with IRL. And miraculously, it's actually working for users who tested the feature: according to their data, members were eight times more likely to go on a date with their Most Compatible match than they were with other Hinge recommendations.

And Hinge isn't the only dating app to get on board with helping their users find great connections. Tinder recently debuted a similar feature called Tinder Picks — available as part of the paid Tinder Gold membership — which curates matches that their algorithm thinks you'll particularly like. The catch? Right now it's only available in a handful of countries — and sadly Tinder Picks hasn't hit the U.S. yet.

Either way, though, it's still great news that many popular dating apps are coming up with new features that are focused on helping users meet better, more quality matches online. Because honestly, there's nothing more frustrating than looking for love only to keep going on nothing but mediocre, obviously dead-end dates. No matter what apps you use, you deserve to have meaningful dates with your online matches — here are seven expert tips for making the most of a date... and hopefully making a love connection in the process.

More like this
The 3 Zodiac Signs Most Likely To Get Married Later In Life
By Kristine Fellizar
The 4 Zodiac Signs Most Likely To Chase You, According To An Astrologer
By Kristine Fellizar
12 Active Date Ideas That'll Get You & Your Boo Outside
By Lexi Inks
TikTok's Voluntary Celibacy Trend Has Sparked A Movement
By Lexi Inks
Get Even More From Bustle — Sign Up For The Newsletter
From hair trends to relationship advice, our daily newsletter has everything you need to sound like a person who’s on TikTok, even if you aren’t.