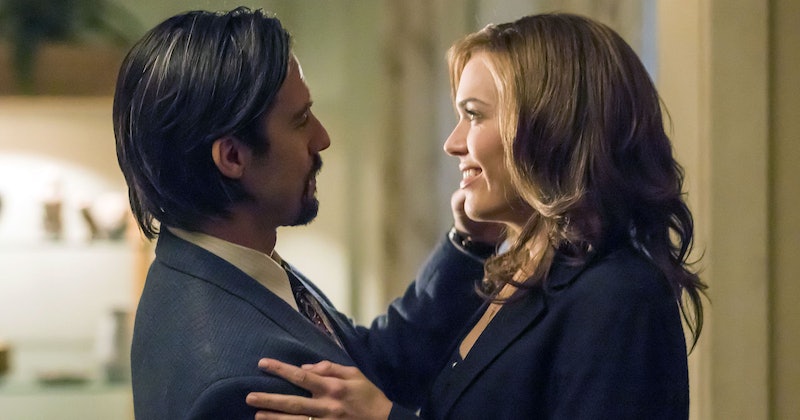 Mandy Moore seems to be synonymous with incredibly emotional, heartfelt, and tear-inducing roles. I mean, even the coldest of people couldn't sit through A Walk To Remember without ending up in floods of tears. And her newest show, The Is Us, is literally next level. The U.S. show has been a mega hit since it began and fans have been absolutely glued to this drama and it's jigsaw storyline. It is three seasons in now, but how can you watch This Is Us season three in the UK?

The thing that drags you back to This Is Us time after time is the way that the characters' backstories are teased out episode after episode. Did someone say mysterious cliffhanger? Yep, they did. It was me.

So, the third season kicked off in the U.S. in September 2018. Channel 4 own the rights to it over here in Blighty, but they have sadly not yet released the date it is set to air. According to the Express, the show "may not return until summer 2019." Ahhhh. And also, y'all, a cursory look around the internet shows that, unfortunately, it's not available to stream anywhere this side of the pond. I know right? How harrowing is life RN? Almost as harrowing as the life and times of the Pearson family.

Warning: spoilers ahead about seasons one and two.

So Jack and Rebecca Pearson are a cute AF couple who fall in love and get married and get pregnant with triplets. Jack and Rebecca are played by Moore and Milo Ventimiglia, respectively, and they are the picture of bliss. Oh, what a joy! That is, until Rebecca goes into labour prematurely and one of the triplets sadly passes away. They decide to adopt a third child who was born on the same day, because that's what they believe was meant to be.

The Pearson story hops between three different time periods: around the time of the children's birth, the time when they are pre-teen/adolescent, and the present day. And this is where things get even sadder and more mysterious.

Throughout the series, the is massive gap in the Pearson's life in the form of Jack's brother, Nick. Right from the get go, you know Jack isn't alive, so you are waiting the whole time to find out what happened to him. They tease and tease, sending him off to fight in Vietnam and all sorts. And then in season two they went ahead and had a big house fire that he saved everyone from. Did he come out unscathed? Of course. Just a little smoke inhalation and some minor burns. They go to hospital to get him all checked out and then he unexpectedly goes into cardiac arrest and flipping dies. I know right? Brutal.

The finale of season two left heaps of unanswered questions (as per flipping usual), but if you're a glass-half-full kind of person you could say that it set the next season up with lots of new stories to be told.

Although Channel 4 have not yet shared when the next season will be on UK TV screens, it is safe to say that, once it airs, you'll be crying like an actual baby in no time at all.