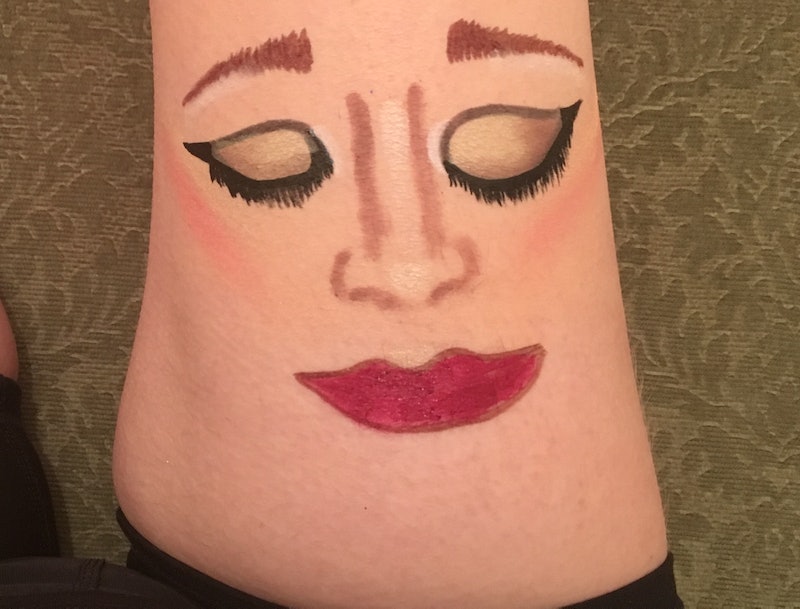 When I saw that thigh makeup was becoming a thing on social media — that is, putting a full face of makeup on your thigh for reasons unexplained, I had to try it, too. I made this choice in an effort to stay totally hip and current, but also because it's one of the most bizarre uses for makeup I've ever encountered.

Here's the background: For some reason, there was a period of time recently when people were applying an entire face of makeup to their thighs and sharing it on social media. Cosmopolitan reported on this quirky beauty trend, which included dozens of photos with captions like, "I didn't feel like doing makeup on my face so I did it on my thigh."

However, according to Teen Vogue, one of the first publications to report on this zany trend, thigh makeup is a great way to practice your skills, "Next time you want to practice drawing with liquid eyeliner or blending out a jewel-toned lid, try it on your thigh before your eye."

If you've followed my escapades in the world of beauty, you'll know this is definitely not the craziest beauty trend I've ever tried. With that in mind, I tried applying a full face of makeup to my thigh, in an attempt to understand the reasons behind it all.

I shaved my legs in the shower and moisturized afterwards so that I had a smooth canvas to work with.

Next, I began my transformation and started applying makeup to my leg. I followed the routine that I would normally undertake when giving myself a full face of makeup.

TBH, putting base makeup on my leg didn't feel that weird, because it was rather creamy and blended in like a moisturizer.

Next came the odd part. I soon learned that this was only the beginning of strange events to come. As I don't have real eyes on my thigh (thank goodness) I had to draw a pair on. FYI, my art skills are non-existent and my best illustration of a human is little more advanced than a stick figure. So, I decided to go for a closed eye look, because there was no way I could draw realistic looking open eyes, on my thigh, with makeup.

Drawing on the eyebrows was ever so slightly less weird, because my eyebrows are pretty sparse (blame the early '00s) so I have to draw them on when I fancy having my brows on fleek.

Trying to create the illusion of cheekbones on a thigh was tough, so my thigh face ended up with cheekbones that looked as if they could slice butter.

When I thought things couldn't get any weirder, I remembered I'd have to give my thigh face a nose if I really wanted to do this properly.

Although I was a little freaked out by how face-like my thigh was beginning to look, I was quite proud of my nose drawing, complete with highlights.

With the eyeshadow, I decided to layer different shades onto the "eyelids" as if I was actually applying makeup to my own face.

I was pleased with the end results.

In fact, I found myself growing jealous of this leggy gal with her near perfect eyeshadow.

The winged eyeliner was the trickiest part. It was difficult to envisage what winged eyeliner looked like when one's eyes are closed. But, I tried my best and ended up with an illustration that looked like a pear, drawn during a still life art class, by a child.

Sure, my cartoony lip drawings haven't advanced in over fifteen years, but something strange began to happen at this stage. I started to feel like Tom Hanks with my very own Wilson — but my inanimate friend happened to be female and attached to my anatomy.

When the lipstick was added, I felt like the face on my leg was beginning to resemble one of the can-can dancers from Moulin Rouge! As this movie was one of my all time favorites growing up, this was both disturbing and comforting all at once.

My hairy thigh lips added an unexpected comedic bonus — I must have missed a spot when shaving!

As I sat, on my own in my hallway, filming myself drawing eyelashes onto a face on my leg, I began to contemplate my life.

But I soon came to the conclusion that, with all of the weird and wonderful things going on in the world, applying makeup to my leg probably wasn't even in the top one hundred.

I was disappointed with my left "eye" as I botched up the inner "eyelashes."

As a final flourish, I added some white eyeliner to the inner corners of my "eyes" and along my "brow bones," to make my thigh makeup really shine.

My Thoughts On Thigh Makeup

I was actually rather surprised at my efforts, plus I was annoyed because I can never get my makeup on my actual face to look this good.

I'd like to say I fell in love with my new design/artwork/leg companion, but once I'd finished I started to feel really odd, as I had a face on my leg for no apparent reason. Sure, it was really fun to mess around with and hone my makeup skills, but at the end of the day, I'd spent my precious time drawing a face on my leg. I could never get that time back again.

You probably know the popular saying, "If you can't beat them, join them," but when it comes to thigh makeup, my advice is: Try this out if you feel like it, but ultimately, the payoff might not be worth the effort. Then again, it never promised to be, did it?