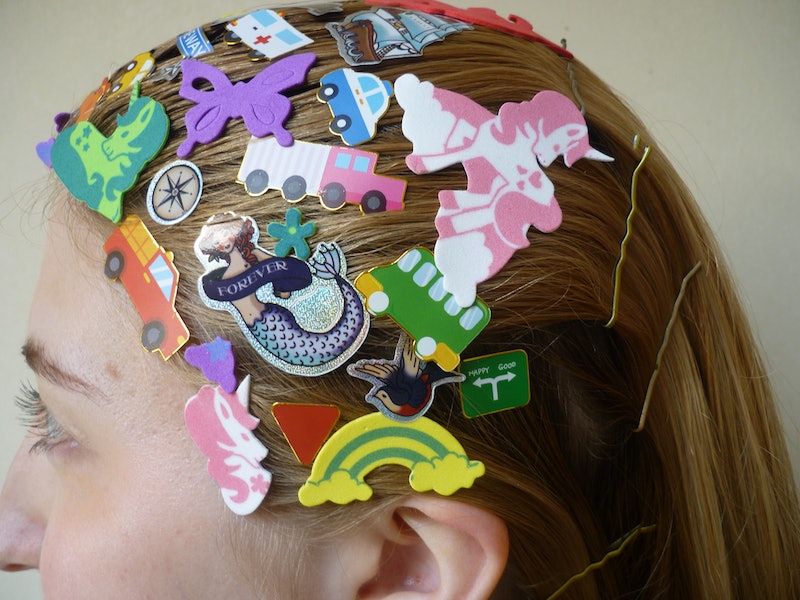 As a gal who grew up in the ‘90s, I was over the moon to discover this totally nostalgic beauty trend — people didn't necessarily do it in the '90s, there's something about it that just feels '90s. Add in the fact that I’m a huge stationery addict, and it’s probably no surprise that I tried sticker hair IRL.

This kooky trend, created by NYC hairstylist Allen Thomas Wood, has gone viral and for very good reason: It’s freaking adorable. As the name suggests, it’s literally a look that comprises of wearing stickers in your hair, although Wood’s model looks as if she’s wearing a quirky headband made of stickers. I can’t speak for all ‘90s kids, but if this had been a thing when I was growing up, I would have jumped on this trend faster than Sonic the Hedgehog at full speed.

According to Allure, Wood, “…applied colorful Japanese stickers to slicked back hair using the end of a comb. Since he tagged the bookstore Kinokuniya USA, it's safe to say that's where he got his adorable stickers.” The end result is super cute yet oddly chic, due to the slick hairstyle. I could totally imagine folks like Katy Perry or Gwen Stefani wearing stickers in their tresses on the red carpet.

Although it seems sticker hair was invented as a creative experiment, I wanted to see what all the hype was about and give this eccentric style a go in everyday life. Here’s what happened…

I hadn't washed my hair in preparation for applying my stickers; as gross as it sounds, I figured the grease would help them to stick better.

To assist my dirty hair in becoming the perfect canvas for stickers, I also combed my hair back and used hairspray to keep it super slick. My hair is really thick, long, and heavy, so I used some blonde bobby pins to keep it in place; I was worried my hair would pop out of its sleek style and interrupt the stickers later down the line.

I live in the UK and (as far as I'm aware) there aren't any Kinokuniya USA bookstores over here, so I couldn't get the same stickers. Heck, there isn't even a Paperchase in my small town in the North of England. So I picked up the most colorful stickers I could from my local pound shop — the UK equivalent of a dollar store.

I was slightly dubious as to where to begin. But once I'd placed my first unicorn sticker, I couldn't stop!

It was like working on an art project; I felt deeply immersed and I was trying to go for a look that was aesthetically pleasing.

However, it was pretty tricky doing it on my own hair, as I couldn't see exactly what I was doing. This unfortunately resulted in some overlap.

Because I had to guess and feel where the spaces where — without messing up my slicked back strands — I had a few gaps too.

What didn't help was that many of my stickers were quite large, so it was too easy to form gaps around them. Because I couldn't see what I was doing, it was tricky to create seamless coverage. If I'd have managed to get my hands on some smaller stickers, this probably would have been more helpful, but I had to work with my limited resources.

Having said that, I think it would have been much trickier to apply a bunch of tiny stickers without any assistance, so I think these stickers worked in my favor.

I felt like I was wearing a swimming cap made of stickers.

Before applying the stickers, I believed I was going to look like a kawaii princess. But when the stickers were attached to my strands in the cold light of day, I felt like an absolute weirdo.

I'm not really someone who minds standing out from the crowd or rocking an unusual look, however this time I felt like I'd taken it too far and I actually felt quite nervous to continue with my everyday activities. But, I'd committed to sticker hair and I'm not a quitter, so I faced my fears and prepared to leave the house.

It was a really sunny day out, so I thought I'd wear my sunglasses, but I soon realized that wearing sunnies with stickers in your hair is quite the challenge. The stickers around my ears kept sticking to the arms of my glasses and I was worried I was going to ruin my 'do.

After some careful manoeuvring I managed to get my glasses on and noticed a bonus of sticker hair — the stickers helped my glasses to stay put. One of the arms of my sunglasses broke a while back and it's since been hanging on for dear life. The stickers helped keep my sunnies on and enabled me to look up and down without my sunglasses falling off.

As I left the house I felt like a bit of a wally. I felt I looked as if I'd fallen headfirst into a children's sticker book and not in a good way.

So as I work from home, I try to get out everyday. I try to walk on the beach as often as I can, seeing as it's a five minute walk from my apartment. Thus, I took my embellished head to the beach.

On my way to the beach the first person I encountered was a man who looked me dead in the eye and smiled knowingly. I passed a few more folks who were oblivious to my cartoony hairdo, then my new look came under the scrutiny of a woman in a car who was squinting (maybe scowling?) at my locks, as if she couldn't work out what was stuck on my head. TBH, if the shoe were on the other foot, I'd look a little perplexed too.

I came to the promenade, that had tons of people taking a stroll on it, but nobody noticed my quirky mane. I had a lovely walk on the beach, which was made slightly less fun by the headwind I encountered on my return home.

As I stepped back onto the promenade, a woman giggled at me but managed to stifle it mid-laugh. Sure, I may have been paranoid, but neither she nor the man she was with were talking.

When I got home, I noticed my hair was rather windswept and many of my strands had blown over my sticker masterpiece and had become trapped. I decided against freeing them in case they uprooted my hard work.

Then it was back to work. I pulled my hair into a ponytail, as I personally can't stand my hair being in my way when I'm trying to be productive. If it didn't look like I was wearing a swimming cap before, it certainly did now!

When my fiancé arrived home from work, we were due to visit the florist who is decorating our wedding venue this summer. So I took my glasses off (I only use them for computer work and driving) and accidentally pulled off a sticker in the process.

I joined my fiancé in the car and we set off to see the florist. It was really funny because he didn't take a proper look at me for a few seconds and then when he clocked my hair, he was flabbergasted.

He couldn't believe I was willing to meet our florist for the first (and possibly only) time with this kooky look. He actually insisted that he be the one to deliver our details and payment for the flowers. He told me he thought that I should stay in the car, because he believed I looked like, "A nut job." I swear my beauty experiments are wasted on him.

At the end of the day it came time to remove my stickers. I'd originally thought they weren't stuck on so well, but I soon found out they did not want to be removed easily. This is what I was left with when I finally peeled off all the limpet-like stickers from my mane.

My hair was an absolute mess too and I dreaded brushing it, but it luckily wasn't too knotty.

My Thoughts On Sticker Hair IRL

Unless you're attending a '90s themed fancy dress party, an artsy photoshoot, or some other kind of eclectic event, I wouldn't recommend anybody wear this look IRL. From my own experience I felt majorly self-conscious rocking this in public and while this might speak more about me as an individual, I'd reckon I'm not alone in feeling this way.

However, if you're attending a quirky art exhibition or you're dressing as a human sticker book at your next costume party and you really want to sport sticker hair, I'd recommend you get smaller stickers and get someone to help you apply them. I felt like my hair didn't have as strong an effect as the original, due to the large stickers and the gaps in-between them.

A parting piece of advice for those partaking in sticker hair: Removal is painful and you will lose strands. You have been warned.