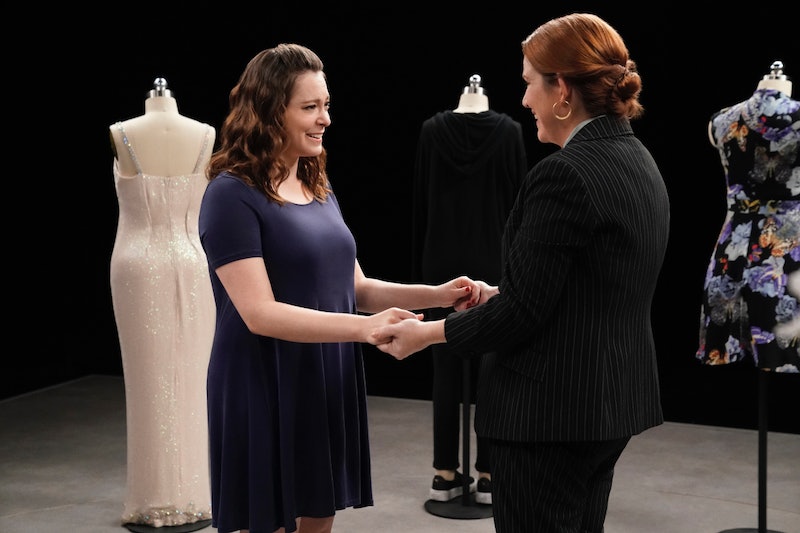 During the April 5 episode, Paula comes over on Rebecca's "Valentine's Day decision day" to ask for some career advice. Rebecca has been agonizing over having to pick between Josh, Greg, or Nathaniel, but she drops that instantly to help Paula — something she may not have done in the past. She also offers the helpful solution that Paula should ask her boss at her new law firm to start a pro bono arm so that she can still represent the women at the county jail for free. "Hey, did you just solve my problem?" Paula wonders rather incredulously. But then she shifts gears to celebrate this milestone in their friendship. "That's great! Because, you know, sometimes I ask for your advice on stuff and then you just talk about yourself." Rather than be upset about this, Paula is proud — and Rebecca is equally proud of herself for finally doing this whole friendship thing "right."

When Rebecca first arrived in West Covina, Paula liked helping with her problems because it distracted her from her own. But over the course of four seasons, they have had issues in their friendship due to Rebecca's self-centeredness. For instance, when Paula had an abortion in Season 2 and Rebecca wasn't there because she was too focused on her love life. So while their mother-daughter dynamic will probably always be a part of their BFF-ship, the Crazy Ex-Girlfriend finale shows that Rebecca has become capable of supporting Paula when she needs it too.

In the flash-forward, we see that this wasn't just a fluke: Rebecca has learned to champion all of her friends, not just Paula. Before singing the song she's written, she spends most of her speech celebrating everyone else's accomplishments. And while her update on what everyone's been doing for the last year is a helpful plot device for fans, it also highlights how much these friends really mean to Rebecca, and that she's made an effort to stay informed about what's going on in their lives.

One of the main reasons Rebecca is now able to be the friend she's always strived to be is because she finally got an accurate diagnosis of borderline personality disorder. Right before she went to her mom's home in New York and attempted suicide, Rebecca had lashed out on her incredibly supportive/borderline enabling friends Paula, Heather, Darryl, and Valencia. In retrospect, it was a cry for help — but it's hard to help a friend when they're bringing you down in the process. Yet, her friends stayed by her side and gave her unwavering support. And through focusing on her own mental health following her diagnosis, Rebecca is now able to reciprocate that support.

For Rebecca, figuring out how to be a good friend was just as important as figuring out which guy she wanted to be with — or rather, figuring out that she didn't want to be with any of them. Because, to play off what Rebecca says herself, romantic love is just one piece of who you are. In Crazy Ex-Girlfriend, platonic love is of equal — or perhaps even greater — importance.