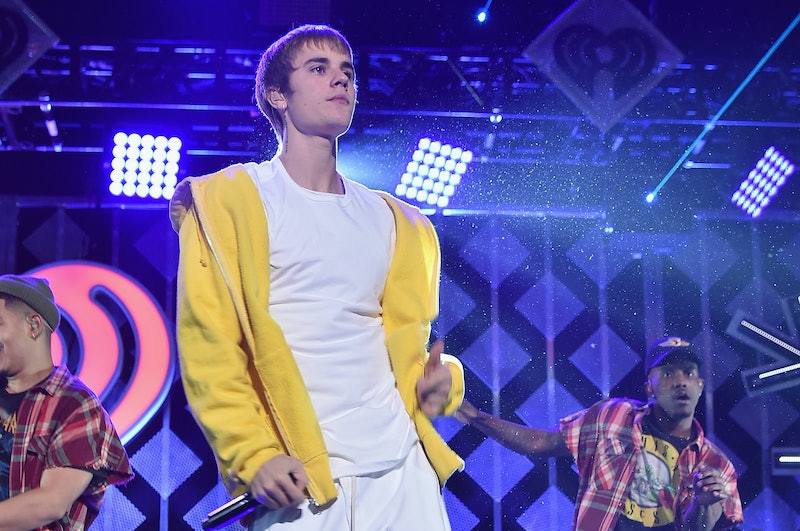 Justin Bieber began his fifth world tour back in March of last year, but, since then, a whirlwind of controversy and questionable decisions surrounded him. The singer later abruptly canceled the final stops of his tour, at first citing "unforeseen circumstances," but, most recently, Bieber explained his tour cancellation more fully on social media. The underlying theme of the post is that he fears he's going to burn out and wants his career — and life — to be sustainable. While it may seem like something that just happened overnight, leading fans to wonder if Justin Bieber is OK, there have actually ben small signs that led up to this major decision.

Consider what you stressed about during your formative years. For most teens, it was worrying about what the rest of the world thinks about you and figuring out your own identity within it. Now that, unlike a normal teenager who can feel overly paranoid about being watched and judged all the time, there are literally millions of people who analyze every single move you make. That's the reality of Bieber, who admitted in his social media post, "Learning and growing hasn't always been easy... I'm VERY aware I'm never gonna be perfect."

So, with that background in mind, let's look at some of the small signals Bieber has been giving us for months that he needs some time to himself.

1. He's Had A Chaotic Relationship With Social Media

Bieber seems to have a love/hate relationship with his social media, especially his Instagram account. He's gone off and on the sharing app in the past year, quitting for a while before quietly returning to social media without any explanation. However, sharing a heartfelt post that explains exactly how he feels, flaws and all, might be an indication that he's finally understanding how to make social media serve — rather than bother — him.

2. He Hasn't Seemed To Enjoy Performing

Bieber's Purpose tour has been filled with some tense moments. He's yelled at fans for interrupting him, and even asked them to stop screaming during concerts. When he's not singing or admonishing the behavior of his fans, he's posting "action shots" of jokingly falling asleep in front of a live audience.

On his birthday this year, Bieber tweeted this picture of himself as a child with this telling caption. It sounds like he's simply having hard time prioritizing the balance in his life between his out-of-this-world career and being a grounded, normal individual.

Bieber has been going nonstop, performing, creating, promoting, acting, modeling, and whatever else the world demands of him. He's traveled, made plenty of mistakes, had famous relationships and even more memorable break ups in the public eye, and made a ton of money. The money aside, that kind of fast lifestyle would burn anyone out, let alone a relatively young man.

Whatever his personal reasoning, and whatever his private journey may be, Bieber deserves to have time to himself to figure out how to be OK again. So, let's not criticize the young singer for what is undoubtedly a difficult decision.

More like this
Hailey Bieber Just Responded To *That* Viral Met Gala Moment
By Radhika Menon and Sam Ramsden
Confusion Reigns After Kanye Changes His Instagram Profile Pic To Kris Jenner
By Jake Viswanath
The Try Guys Cheating Scandal, Explained
By Grace Wehniainen
The Real Reason Russell Brand Decided To Quit YouTube
By Sam Ramsden
Get Even More From Bustle — Sign Up For The Newsletter