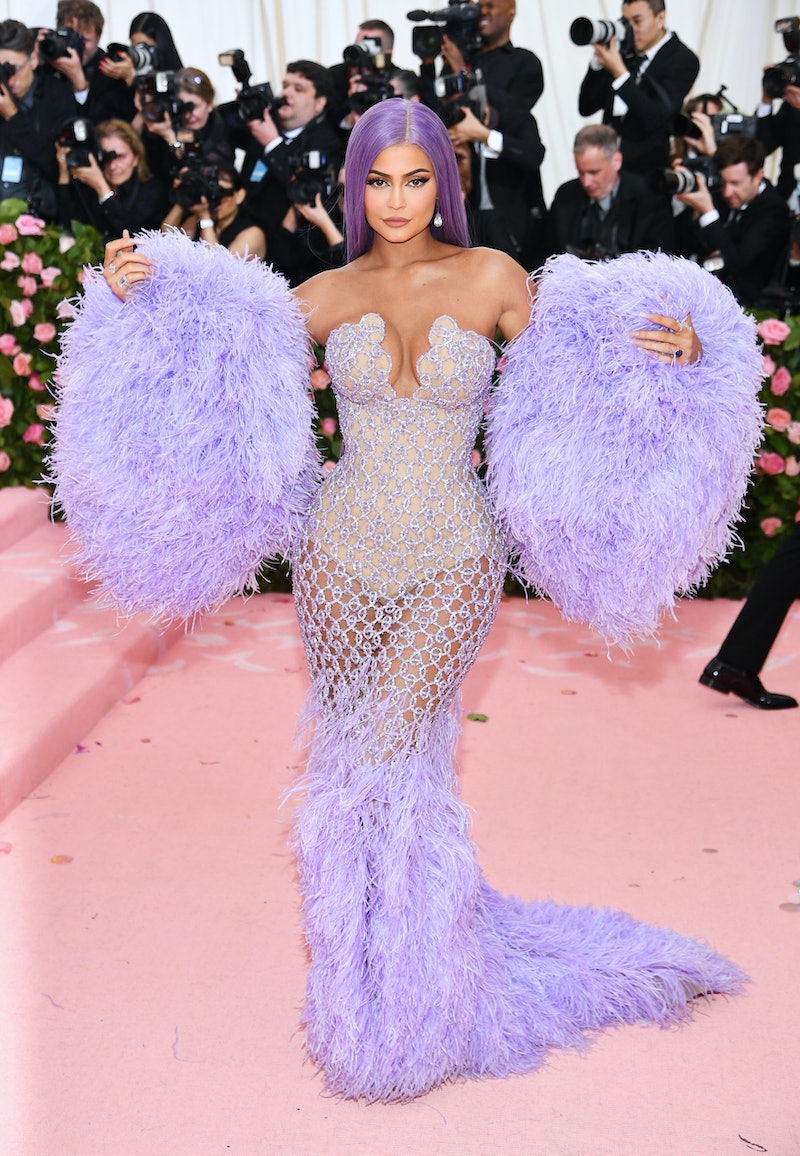 Another day, and there's another celebrity hair change. While the parade of 'do switch-ups may seem endless, let's be honest. Everyone wants to know what a celebrity looks like when they switch up their classic look. The latest change is Kylie Jenner's blonde hair. The youngest member of the Kardashian and Jenner clan celebrated her former tutor Tiffany Sorya and friend Carter Gregory's birthdays, and she had a whole new look to do so.

On June 22, Jenner began posting to her Instagram stories showing herself getting ready for the joint birthday party. Of course, the Kylie Cosmetics and Kylie Skin owner's long-sleeve, glittering mini dress was a show stopper, but her hair was the biggest change. While her sister Kendall sported her classic, long straight look, Jenner chose to switch things up in a blunt bob just below her shoulders complete with thick bangs that ended just at her brows.

So is Kylie Jenner's blond bob real? No, of course it's not. If you've been a fan or even just someone with a passing interest in the Kardashian family (you know you keep Keeping Up With The Kardashians on in the background sometimes), you'll know that nearly every member of the family loves a good wig, but Kylie is especially adept at wearing them.

The blonde wig honestly looks killer on the reality star, but the change is not permanent. In fact, it's not even that different from bobs and blonde hues she's worn in wig form in the past.

If you were thinking that maybe this time Jenner actually took the plunge and colored her hair platinum blonde alongside chopping off all the length, you should probably check out her Instagram. A day after images from the party appeared on Jenner's stories, she posted a photo of herself back with her long, dark hair.

That, however, doesn't mean you won't see the look again. While the reality tv star has never worn that specific look before, she has rocked similar wigs in the past, and all of them look incredible on her.

Back in 2015, she tried bangs on the red carpet for the MTV Video Music Awards, and despite her hair being a bit longer and darker back then, the fringe look is similar.

While bangs are less common in Jenner's more recent appearances, bob are certainly not. Her 2016 Met Gala look featured her naturally dark hair cut into a bob just at her shoulders. Then, the following year, she rocked nearly the same cut but in platinum blonde.

Jenner also loves to twin with her sisters when they've got shorter styles. Last November, Jenner and sister Kim Kardashian collaborated on a set of new lippies for Jenner's brand and looked stunning in marching dark bobs.

Sure, Kylie Jenner's blonde bob may not be real, but that doesn't make it look any less amazing on the reality tv star. Plus, with Jenner's clear love for blonde locks, bob hair cuts, and wigs, fans will likely see more looks coming from Jenner in the future.