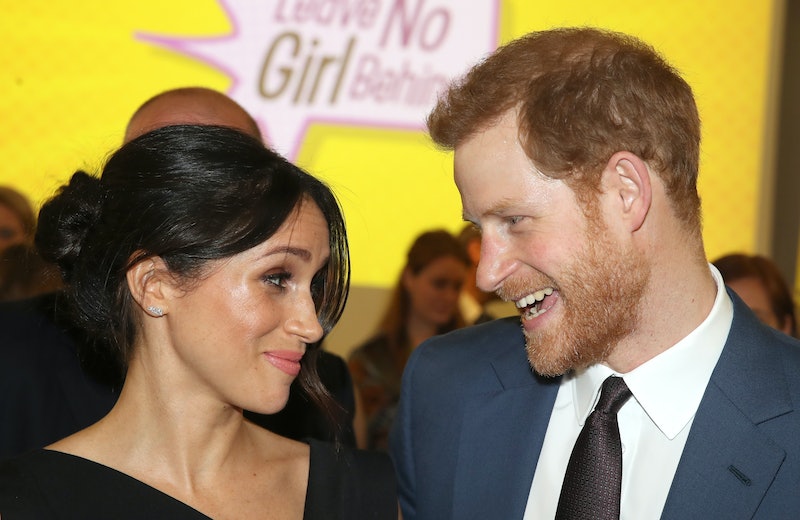 I'm having serious wedding anxiety right now. Oh... sorry — not for my own. I'm talking about Meghan Markle and Prince Harry. The royal wedding is a mere 10 days away (eep!), and thoughts of Markle's wedding dress fill my dreams at night. Kensington Palace confirmed what kind of flowers we can expect, we know the flavor of wedding cake they went with, and I can already envision the happy couple making their way through Windsor in their royal carriage. One question (okay, a million questions) still remains, though: is there alcohol at the royal wedding?

You can't blame a girl for being curious. Alcohol is a staple at most weddings. While there are a ton of variables to consider — how many guests you have, what kind of alcohol you offer, whether or not there's an open bar — we tend to spend a pretty penny on drinks. EventPlanning.com says for a wedding with 150 guests, a rough estimate for the open bar would come out at $4,500.

And this is for 150 people. According to TIME, there will be around 600 guests at the lunchtime reception after the ceremony at St. George's Chapel for Prince Harry and Markle, and then, reportedly, 200 of those guests will attend the big party later that night.

So, 600 people for a wedding lunch, and then 200 people for the fiesta afterward. And they're gonna want a little booze.

I went on the hunt for a clear answer about the rules regarding drinking alcohol, figuring I'd find something clear cut. After all, there are definitive rules about wedding guest attire and traditions Markle must follow. To my surprise, though, there's not a whole lot information defining alcohol etiquette.

So, this is mostly speculation.

For starters, the Queen's in charge — that much goes without saying. So let's start with her alcohol consumption. There was previously a rumor Her Majesty drinks four cocktails a day, putting most college students to shame. However, her former chef set the record straight. Reader's Digest clarifies she indeed enjoys gin and Dubonnet, but likely doesn't down four a day.

Still. The Queen likes her dranks.

Next, let's move on to Markle, a self-proclaimed foodie and serious wine lover. An interview with Delish revealed her wine of choice is Tignanello. She loves it so much, she named her now-defunct lifestyle website The Tig. She also enjoys Argentinian Malbecs, French cabs, pinot noir, and rosé. "In the summer ... when I'm out with my friends, it's rosé all day," she told the site.

Now, what about Prince Harry? I didn't have to do much digging to get my answer here. He's a former bad boy who still has a little troublemaker in him. According to Cosmo, in an interview with journalist Angela Levin for her book Harry: A Biography of a Prince, he said, "I still have a naughty streak too, which I enjoy and is how I relate to those individuals who have got themselves into trouble."

Does this "naughty streak" include a drink here and there? It's safe to say yes.

The major players involved in this wedding all seem to enjoy alcohol.

Next, we can look at what's happened in weddings past. Prince William and Kate Middleton reportedly went with Kent's Chapel Down winery. We do know from their menu — which went up for auction back in 2015, says Bazaar — dessert was paired with Laurent Perrier Rosé. While I don't believe the menu has been confirmed for the upcoming wedding — or the alcohol, for that matter — The Sun claims Prince Harry and Markle are going with the same choice of winery as Will and Kate.

Aside from this, it's the noticeable lack of information about alcohol at the royal wedding which leads me to believe it will very likely be a part of it.

Does that mean the bride and groom will end up three sheets to the wind? Personally, I doubt it. Markle has made sure to maintain a proper, professional, and sophisticated reputation in the months leading up to her nuptials. Even though it's a wedding, intuition tells me she'll still be in control of herself — especially since there won't be much rest for these royals. Their engagements as a couple will kick off so quickly after the wedding that they're delaying the honeymoon; not an ideal situation for nursing a hangover, that's for sure.