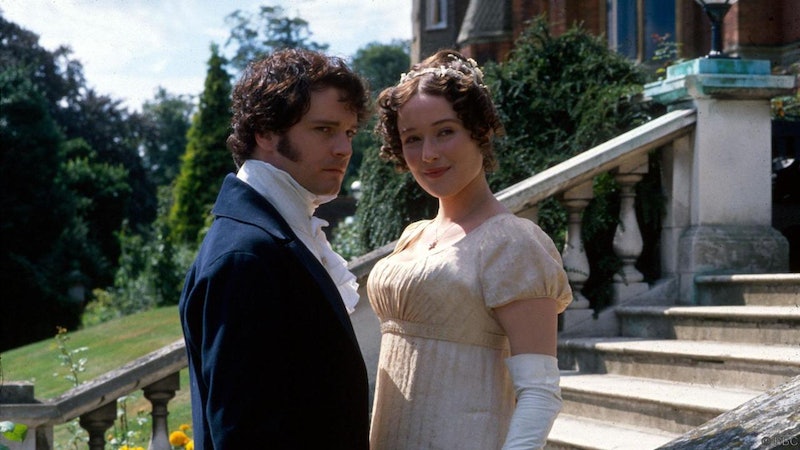 Romance readers, be prepared to swoon, because I have some pretty incredible news that just might sweep you off of your feet. Jane Austen's unfinished novel Sanditon is being adapted for television for the first time ever, and helming the project is the screenwriter behind your favorite Pride and Prejudice adaptation, Andrew Davies. That's right, the guy who brought you a soaking wet Colin Firth as Mr. Darcy is brining another iconic book to life, and if you've always wondered how Austen's hilarious, seaside romance ends, this is your chance to find out.

On July 10, ITV's Head of Drama Polly Hill announced plans to bring Sanditon to life for television audiences in the U.K. and the U.S. A collaboration with Red Planet Picture and MASTERPIECE on PBS, the eight-part drama will be based on the 11-chapter fragments author Jane Austen left behind in the manuscript she was working on at the time of her death. “It’s a rich, romantic, family saga built upon the foundations Jane Austen laid,” Polly said of the project.

Although it's a well known fact that the book is always better than the movie — or, in this case, the miniseries — fans don't have to worry about the fate of Sanditon, because the project is in very capable hands. Screenwriter Andrew Davies, whose credits include the television adaptations of War & Peace and Northanger Abbey, is no stranger to successful period dramas. His critically acclaimed 1995 television series Pride and Prejudice not only helped launch actor Colin Firth's career, but it is frequently counted among the best Austen adaptations. In other words, Davies is well prepared for this new and exciting project, so fans don't have anything to worry about.

Written shortly before Austen's death in 1817, Sanditon tells the story of Charlotte Heywood, an impulsive young woman who finds herself unexpectedly away from her rural hometown and smackdab in the middle of up-and-coming coastal town from which the novel gets its name. It's there that she meets the ever charming, often troublesome Sidney Parker, whose father wishes to transform Sanditon into a fashionable seaside resort. Hijinks, drama, romance, and apparently "quite a bit of nude bathing" ensues.

Though the author never completed the novel, the existing chapters of Sanditon were posthumously published in 1925. In the years since, several authors have written continuations of the story in book form, and now for the first time, a writer is bringing it to life on screen.

“Jane Austen managed to write only a fragment of her last novel before she died – but what a fragment!” Davies said when speaking about the upcoming project. “Sanditon tells the story of the transformation of a sleepy fishing village into a fashionable seaside resort, with a spirited young heroine, a couple of entrepreneurial brothers, some dodgy financial dealings, a West Indian heiress, and quite a bit of nude bathing.”

While there have been dozens and dozens of films and television shows based on Austen's work before, including the iconic reimagination of Emma, Clueless, and the ever hilarious Bridget Jones's Diary, this will be the first time Sanditon has ever been adapted for the screen. Considering how many Austen fans there are out there, and how many have been dreaming of the day Sanditon gets a proper ending, this adaptation is sure to be well-received.

There is still no word on casting and a release date is yet to be announced, but filming for Sanditon is expected to begin as early as spring 2019. Until then, fans have plenty of time to rewatch Davies other wonderful Austen adaptations, or read one of the many continuations of the book other authors have penned.