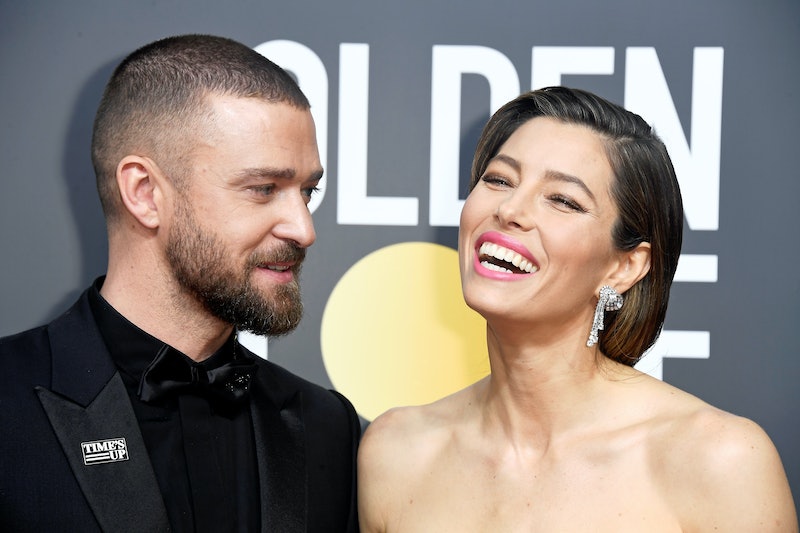 Justin Timberlake is going to have one pretty epic first week of February with the release of his album Man Of The Woods and his Super Bowl Halftime performance. But before he could get to all that, Timberlake celebrated his birthday on Jan. 31 with a little help from his wife. Jessica Biel wrote Timberlake a birthday message on Instagram that in all its mushiness expressed how much Biel truly loves her husband. "A picture says a thousand words. And thank goodness because there aren't enough to express ALL the aspects of my love and respect for you," she wrote on a photo of the pair looking oh-so lovingly at one another. And beyond giving some encouragement for his Super Bowl LII performance, she gave a major shoutout to Timberlake for his dad skills.

Just two days before the release of Man Of The Woods and four days before his appearance at the Super Bowl, Timberlake turned 37 years old. In the midst of these exciting events, Biel focused her Instagram birthday message around the type of person that her husband is — particularly how good of a father he is to their 2-year-old son Silas. Biel wrote:

"Here's to a spectacular year ahead. I'm so proud of all you've accomplished and all that is ahead for you. plus you're a super hot dad. A ninja dad. A kiddie teeth brushing, Jedi sleep mind tricking, intimidating dad voice disciplining SUPER HOT DAD. I love you, you hot dad."

Timberlake has said that his forthcoming album is inspired by his wife and son, so insight into their dynamic as parents is appreciated. (Biel even is sporting an "S" necklace in the photo, most likely for Silas.) And clearly, Biel finds Timberlake's devotion as a parent to be attractive. She wrapped up her message to the "hot dad" by writing, "I'm here, right by your side, OG fan girl #1. Happy birthday, my beloved. Now go crush it this weekend at SB LII." And while many fans of *NSYNC would argue that they are Timberlake's "OG fan girl #1," only his wife of five years can really claim that title.

While his birthday meant it was Biel's time to praise her husband on social media, Timberlake is usually the one sharing his feelings about his wife on Instagram. For her 35th birthday, Timberlake wrote how Biel makes him want to be a better person. And for their fifth wedding anniversary on Oct. 19, 2017, he said that Biel taught him what true love means.

Besides receiving this super sweet message from his wife, Timberlake had a busy birthday full of work. He posted on Instagram three times and showed that he was rehearsing at the site of Super Bowl LII — the U.S. Bank Stadium in Minneapolis, Minnesota — and previewed his new music.

He also made time for a haircut because you gotta look your best when you have an album to promote and a Super Bowl show coming up. During his haircut video post, Timberlake made it clear that Man Of The Woods is not a country album (which everyone should have known by now after hearing "Filthy"). He said the somewhat-misleading title comes from the meaning of his son's name. As Elite Daily reported, he previously revealed on a radio show that Silas means "man of the woods."

While he spent his birthday working and getting haircuts, Us Weekly reported that Timberlake had a birthday dinner on Jan. 30 with Biel and a group of friends. Since he's in Minnesota for the Super Bowl between the Patriots and the Eagles, they dined at a French restaurant in St. Paul.

Timberlake has kicked off 2018 with huge career moments. But Biel's post on his birthday is a reminder that what's really important to Timberlake is his role as a father. So even with his fifth solo studio album and his third Super Bowl performance, this Man of the Woods is still all about his family.