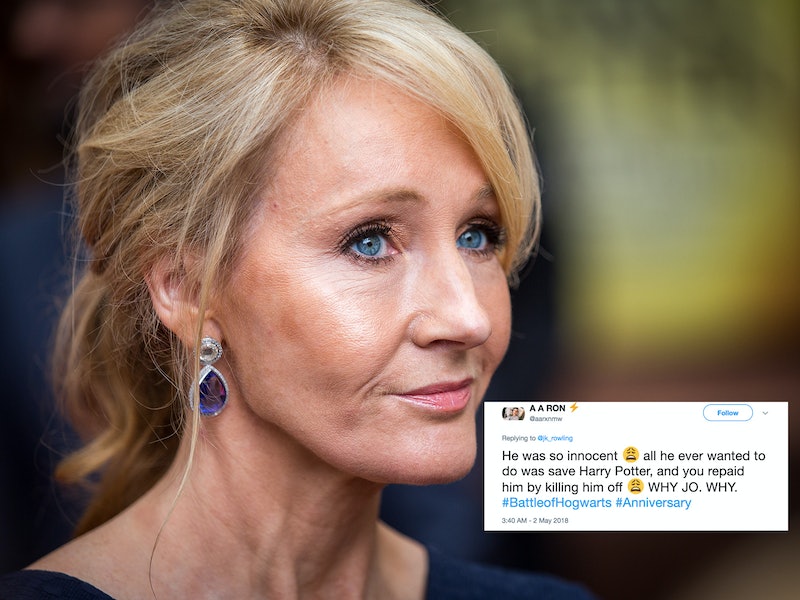 Rob Stothard/Getty Images Entertainment/Getty Images; A A Ron/Twitter
By Sadie Trombetta
May 2, 2018

For most people, May 2 is just another average spring day, but for Potterheads, it is one of the most significant dates in the fandom: the anniversary of the Battle of Hogwarts. As is tradition, Harry Potter author J.K. Rowling honored the occasion on Twitter by saying she is sorry for killing a truly beloved character.

An epic fight between good and evil that took place at the end of Harry Potter and the Deathly Hallows, the Battle of Hogwarts claimed the lives of some of Rowling's most beloved book characters. On that bittersweet day, new parents Remus Lupin and Nymphadora Tonks laid down their lives for the cause, as did Fred Weasley, Severus Snape, Colin Creevey, Lavender Brown, and at least fifty other members of the Order of the Phoenix and Dumbledore's Army. Although good won out in the end, the casualties it took to claim victory at the infamous battle are still major sore spots for readers. That's why, for several years now, Rowling has used May 2, the anniversary of the Battle, to apologize to her fans for killing some of their favorite characters.

In the past, Rowling has said sorry for killing Fred Weasley, Remus Lupin, and Severus Snape (an apology the internet had a lot of feelings about, rightfully so), but this year, the author paid tribute to a beloved character whose death was particularly heartbreaking. "It's that anniversary again. This year, I apologise for killing someone who didn't die during the #BattleofHogwarts, but who laid down his life to save the people who'd win it," Rowling tweeted out. "I refer, of course, to Dobby the house elf."

A true hero who died saving Harry Potter and his friends, Dobby the house elf was always willing to put his life on the line for the people he cared about. Readers will remember the beloved house elf's introduction in Harry Potter and the Chamber of Secrets, where he makes Harry's life a nightmare all in an attempt to save him from certain death. First, Dobby appears at the Dursley residence to beg Harry not to return to Hogwarts. When that doesn't work, he pulls a magical prank that nearly gets Harry kicked out of school, and when that fails, he rigs the entrance to the Hogwarts Express to keep Harry out. For the rest of the school year, Dobby does everything in his power to try and help Harry and his friends stay safe from the monster lurking at Hogwarts. Harry then repays the favor by tricking Lucius Malfoy, the house elf's owner, to release him from servitude, and Dobby is loyal to the Golden Trio until the very end. Literally.

Dobby was always willing to help Harry and the Order of the Phoenix, even when it cost him his life. In Harry Potter and the Deathly Hallows, he helps Harry and company escape the Death Eaters clutches at Malfoy Manor. In the process, he is fatally wounded by Bellatrix Lestrange — one character whose eventual death Rowling will ever have to apologize for — and dies in Harry's arms.

If just thinking about Dobby and his tragic death is making you tear up, don't worry, you aren't alone. Rowling's apology tweet has prompted some emotional responses online from fans who still aren't over the house elf's tragic death.

As you can see, fans are still not over losing one of the funniest, kindest, and most iconic characters from the Harry Potter series, and they might never be. Dobby was, after all, great comedic relief in a series full of dark moments, and one of the biggest heroes of the story. Today's apology from Rowling feels like the perfect tribute to him.

More like this
9 Must-Read New Books Out This Week
By K.W. Colyard
'Bridgerton' Star Nicola Coughlan Confirms Season 3 Will Focus On Colin & Penelope
By Grace Wehniainen and Alyssa Lapid
Candice Carty-Williams’ 'People Person' Tackles Daddy Issues With Warmth
By Sam Rogers
The Trailer For The 'Game Of Thrones' Prequel 'House Of The Dragon' Is Dark AF
By Grace Wehniainen
Get Even More From Bustle — Sign Up For The Newsletter