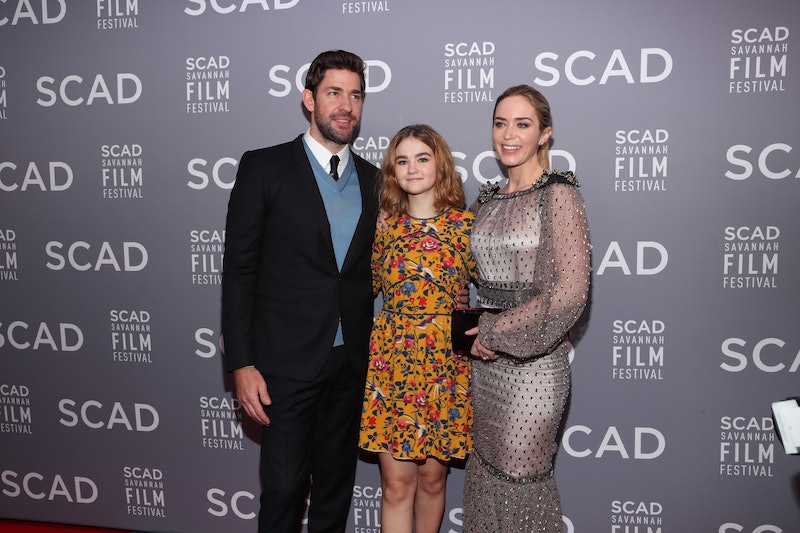 After the monstrous success of the horror phenomenon A Quiet Place, it's only natural that Hollywood quickly began working on a sequel — and thankfully, the film's stars, John Krasinski and Emily Blunt discussed a Quiet Place sequel and what they would want to see from the film. In an interview with Entertainment Weekly at the 2018 SCAD Savannah Film Festival, the married co-stars each revealed their vision for a new story in the post-apocalyptic universe that the film sets up ... and the couldn't be more different.

Spoilers ahead for A Quiet Place. After playing Evelyn, the fierce matriarch of the Abbott family who is trying to balance a need to protect her children with the desire to let them have a fulfilling life, Blunt is most interested in delving more into the Abbott's past, and finding out how the family ended up hiding for their lives in the first place. "In some ways, the idea of seeing who these people were before this all happened would be interesting," Blunt told EW about her hopes for the project, which is still in development.

However, she added, "I think actually it’s now what’s the next chapter and what happens next. I think people feel very invested in this family. ... I think it’s such an open book right now, and certainly for John who is lasering into something as we speak."

Krasinski, who co-wrote, directed and starred in multiple roles in the film, however, is interested in the opportunity to expand the universe that A Quiet Place establishes and wants to explore the "rules" of that world through the eyes of new characters. "This is a world you can play in, this isn’t just a character to remake ... it’s actually a world, which is a whole different, very unique experience," Krasinski said.

He continued: "It’s not like Alien or Jaws where the main villain is the thing you’re repeating; it’s an actual entire set of rules and the circumstance that the world has undergone that you can play in very different facets."

Of course, Krasinski's desire to shift the focus away from the Abbott family isn't totally surprising; the actor originally "didn't want anything to do with the sequel," and told The Hollywood Reporter in October that he wanted to keep the film as a special experience that he shared with his wife.

"That was my intention for the movie itself," Krasinski said at the time. "Then I had this small idea for a sequel, but I didn't think it would go anywhere. So, I said to the studio, 'Just go do the movie with somebody else.'"

While the actor didn't reveal exactly what that "small idea" was, he has shared a few concepts for a potential sequel in the past. Back in May, Krasinski told Deadline that he was toying with the idea of using a small detail from A Quiet Place to set up a brand new story.

"The thing that I loved in the movie, where my mind kept wandering as we were making it, was the question of who was on the other end of those fires, when the father lights the fire and in the distance those other fires light up," Krasinski said. "How did those people survive? How did that old man survive?"

But Krasinksi and Blunt aren't the only ones who have put a lot of thought into a potential Quiet Place sequel — Millicent Simmonds, who played the eldest Abbot child, Regan, has not one, but three interesting ideas for a potential new storyline.

“One would be looking into the past. Like, how did the aliens come about?” Simmonds told EW. Her second idea is similar to Krasinksi's, and would focus on a new family "working on the same problems" as her onscreen family, and "the third idea would be the [set in] future: You know, what is the world like after, once the kids are older? Or what happens to the aliens or how do we improve or solve that problem?"

Does anyone else hope that Paramount will somehow find a way to greenlight all three of Simmonds' possible sequels? Because those are all A Quiet Place sequels that people would line up to see. Fans can find out exactly which one of those plots — if any — the studio decides on when the Quiet Place sequel is released in theaters in May 2020.