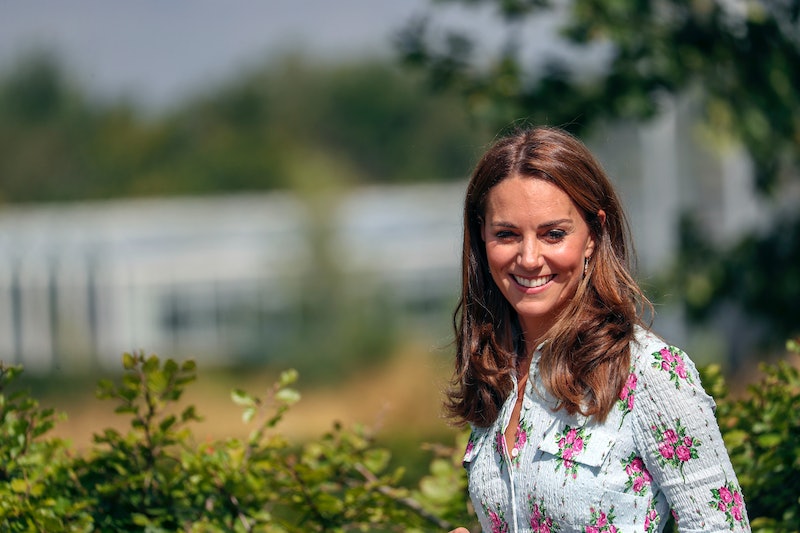 The pumpkin spice latte may be back, but for the Duchess of Cambridge, summer doesn't seem to be over. Kate Middleton's rose dress for the Wisley Royal Horticultural Society Back to Nature Garden is proof that while many are celebrating fall, there's still time left to rock summertime florals.

According to Harper's Bazaar, the Duchess of Cambridge made a surprise appearance on Sept. 11 at the unveiling of the third and final Back to Nature garden about an hour outside of London. The garden is the final space to be unveiled as part of the Royal Horticultural Society's joint project with the Duchess (the Queen is a the patron of the organization). Middleton actually helped to design the play gardens and unveiled her own in May at the Chelsea Royal Flower Show. Elements from that garden as well as the second space inspired the third location at Wisley.

With an event all about gardens, Middleton certainly dressed on-theme. Style website What Kate Wore reports that the Duchess was wearing a dress by designer Emilia Wickstead that featured a seersucker material and was covered in a head-to-toe rose print that was certainly appropriate for summer. Of course, with fall approaching the dress also featured long sleeves and a midi-length that made it a great transitional option between seasons.

Fans of the Duchess got a second look at Middleton's blonde hair while at the event. The Duchess debuted a new golden color earlier in September while dropping off her children for their first day of school. At the Back To Nature event, the blonde in her hair is subtle but certainly gives her that trendy bronde look.

As for Middleton's accessories, she paired the dress with espadrille wedges (though not her go-to Castañer style). The new pair are a slip-on design with a rope bottom, but according to What Kate Wore, the shoes are sold out. As for the dress, it's also sold out, but with a price tag of over $2200, maybe that temptation shouldn't exist for royal fashion fans, anyway.

Fans of Middleton's style may be surprised at the summertime floral she's wearing so late in the season, but they likely aren't shocked by the designer of the dress. Emilia Wickstead is a favorite of both Middleton and her sister-in-law Meghan Markle.

Most recently, Middleton wore a soft, sky blue Emilia Wickstead dress when she attended Wimbledon where she gave the trophy to the winner of the men's singles final (she's the royal patron of the tournament). While the dress designer was slightly overlook thanks to Middleton's $90 Aldo heels, it was still a gorgeous choice.

As for Markle, she and Wickstead were, at one point, rumored to not be on good terms due to the designer allegedly calling the Duchess of Sussex's Givenchy wedding dress similar to a design of her own. The pair put those rumors to rest, though, thanks to Markle's sartorial choices. The Duchess has worn Wickstead's pieces on more than one occasion just like her sister-in-law.

Middleton and Markle will both likely wear Wickstead's piece again if the past proves to predict the future, but the Duchess of Cambridge may also keep rocking florals. The royal has a penchant for them, wearing them in multiple seasons. After all, she was also wearing floral when she debuted her new hair, and last February, she wore a floral during a snowstorm.

While summer may be ending, Middleton's floral looks like aren't.