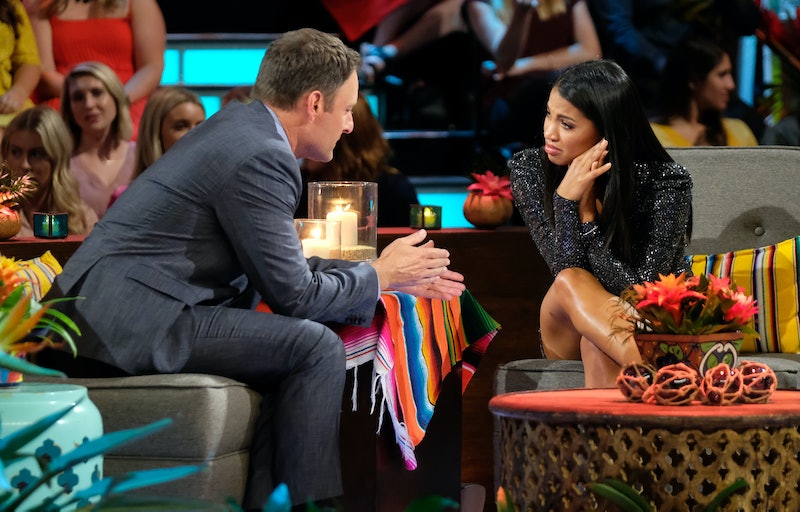 After their engagement on the beach, their conversation at the reunion, and their argument outside of the studio, Chris and Katie's relationship during the Bachelor in Paradise finale might have had your head spinning. But Katie explained her Bachelor in Paradise reunion with Chris to PeopleTV's web series Reality Check on Wednesday, Sept. 19, and assured fans that the couple is doing much better. Despite their emotional dialogue in the hot seat with host Chris Harrison, Katie and Chris are still together, and they're being open and honest about the relationship struggles that led up to the emotional segment.

The Bachelor in Paradise reunion was filmed three weeks before it aired, and the show didn't give a final update on where Katie and Chris stand. But the pair are still engaged, and they have both posted about their ongoing relationship on social media, declaring their commitment. Now Katie is explaining why she was so upset at the reunion, giving audiences some major insight into what life is like for Bachelor Nation couples once the cameras stop rolling.

"It had been really hard for us to communicate our differences and what each other needed, especially being kind of like stranded and in hiding while separated," Katie told Reality Check. As most fans know, contestants on the franchise must keep their relationships a secret for months until the last episode of the season airs, and that means limited interactions, which can expose some significant issues. She continued, "Especially because Chris is such a man of action and quality time and he does things for people, and talking on the phone all the time was a little bit harder to get words out of him."

Chris admitted that he doesn't like talking on the phone to anyone. But he also noted that their struggles were more than phone-deep. "I think both of us excel in public settings, you know with our friends and our family. And not being able to do that, it was tough," Chris said. "But at the end of the day, I think it actually made us better and stronger. So sometimes it takes things like that to get to the point that we're at today, and I think every day we get better in our relationship."

And all these problems came to a head when the reunion filmed in August, just a few months after Bachelor in Paradise ended filming in June. As Katie explained to Reality Check, she felt she had to "had to be honest with where I was" when she took the stage with Harrison. That said, there was a lot more to her interview than what eventually made the how. "Chris Harrison asked me a lot of questions, even prior to what you guys saw, and so the emotions were just building up," Katie said. "But since then, it's been so great. We've been able to be together, and he's met my family and my friends, and seeing him with them has been so much better now that we can hang out."

As Katie told Reality Check, the differences in their communication styles are "always going to be there, it's just navigating them." And by tackling these problems now, Chris and Katie might just end up navigating their way to a long, happily married life together.