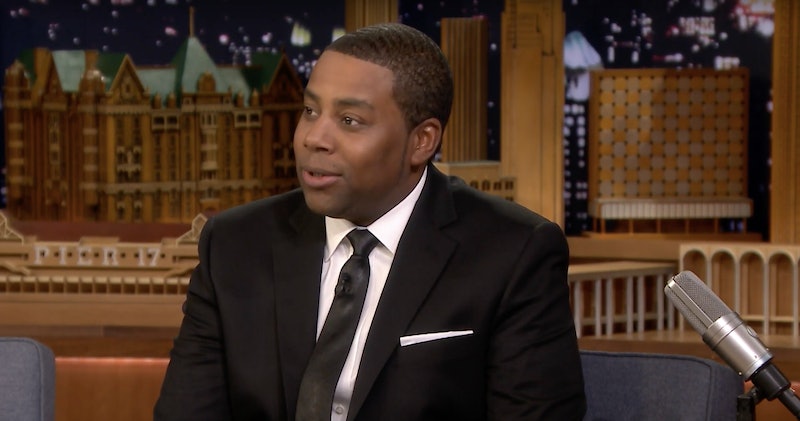 On the Jan. 31 episode of The Tonight Show with Jimmy Fallon, SNL star Kenan Thompson shared well-wishes to Jussie Smollett, his Mighty Ducks costar, who recently was the victim of what police are calling a "possible hate crime" near his Chicago-area home. And his comments prove that the bond between the Mighty Ducks alums is seemingly unbreakable.

While discussing some of Thompson's recent accomplishments, which include winning an Emmy, host Jimmy Fallon honed in on the actor's role in Ducks franchise, prompting the former Nickelodeon entertainer to share his heartfelt thoughts to both Smollett and his family. “Speaking of,” Thompson interjected as Fallon began to relive the glory of the '90s action films. “We should send some love to Jussie Smollett ‘cause he is a Mighty Duck.” He went on to say that he initially thought about posting something about the vicious attack on Smollett via his newly created Instagram page, but felt that the moment deserved a "way bigger platform." Thompson then sent "a lot of love to the Smollett family" and “to the universe" saying, "This kind of madness needs to stop.”

For those who may not remember, before starring on Empire, Smollett played the role of Terry Hall in the original Mighty Ducks film. Unfortunately, he never starred alongside Thompson’s character, Russ Tyler, who appeared in Mighty Ducks 2 and 3. But that doesn't mean that Thompson doesn't seem them as part of the same Mighty Ducks family. It's a family that is very dear to the SNL star's heart. In fact, during his sit down with Fallon, Thompson revealed that he recently spent time with some of his former co-stars at a hockey game earlier this month, telling the talks show host, "we just had a Mighty Ducks reunion and a couple of us got together."

Thompson wasn't the only one of Smollett's costars to express their feelings on the brutal attack. Smollett's TV mother Taraji P. Henson, supported him in powerful social media post. The message, which featured Smollett's politically and socially charged song and music video "F.U.W.", was shared on Instagram and revealed Henson's reaction to the incident. Her caption read in part:

"I wish what happened to my baby was just one big bad joke but it wasn’t and we all feel his pain right now. @jussiesmollett is pure love to the bone AND THAT IS WHY SO MANY ARE FEELING HIS PAIN BECAUSE IT IS OUR PAIN!!! I tell you one thing HATE WILL NOT WIN!!!! My baby is resilient and love still lives in him. The devil and his minions are very busy right now but one thing is for sure and two things are for certain #GODIS and that is all I know."

"I heard he's getting better. He’s angry, but I know Jussie. Jussie's anger will dissipate, and he will forgive these people for what they did. But he won’t, and we cannot, forget their actions. They have to be forgiven because it was done out of ignorance."

Smollett, who is openly gay and plays the openly gay character Jamal Lyon on Fox's Empire, was reportedly attacked in Chicago on Jan. 29 by two unknown people, who allegedly hit the actor repeatedly and poured an "unknown chemical" on him, according to a Chicago Police Department statement shared by HuffPost's Front Page Editor, Philip Lewis. The actor was hospitalized following the attack. According to ABC News, Smollett additionally told police that the attackers yelled "MAGA country" during the brutal assault. On Jan. 30, police released several images of "potential persons of interest," but no arrests have been made.