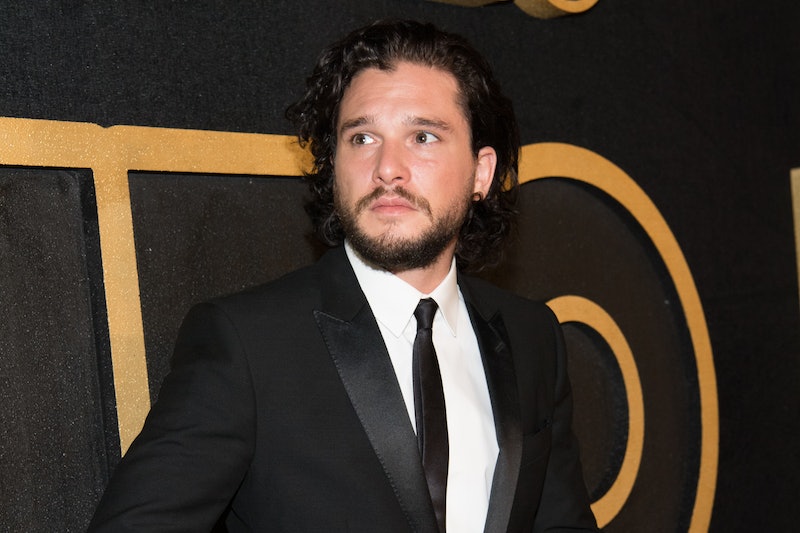 Finding out how a beloved, action-packed television show ends is always an emotional process — especially when you're discovering the final twist in front of a large group of people. Well, Kit Harington found out the Game of Thrones ending in front of the entire cast, during a very emotional table read of the final episode.

The actor, who has played Jon Snow on HBO's hit fantasy series for the past eight seasons, admitted during his March 5 appearance on The Late Show with Stephen Colbert that he was the last member of the cast to find out what happened in the show's finale. "We had a table read and I was the one person who hadn’t read the episodes. Everyone else had them like, three days before and read them and I just," he told host Stephen Colbert. "I think I told everyone it was because I didn’t want to know what happened, but I think it was just laziness that I didn’t read them," he explained.

"Anyway, I got to the table and they used me as a litmus test. [Creators David Benioff and D. B. Weiss] were looking at me to see how the events unfolded, and they got some pretty good reactions," Harington revealed. The actor even noted that the creators caught his reaction on camera, which fans everywhere are now hoping will be aired during the Game of Thrones finale.

And it sounds like Harington's reaction was worth watching, as he confessed to Colbert that he broke down in tears during the table read. "I was very shocked and surprised at certain events unfolding," Harington said of reading the final script. "And then I blubbed my eyes out. I cried. I cried, yeah."

According to a December interview with Entertainment Weekly, Harington actually cried twice during the table read, but was only able to talk about the second instance without spoiling anything. "The second time was the very end," he told the magazine in November of 2018. "Every season, you read at the end of the last script 'End of Season 1,' or 'End of Season 2.' This read 'End of Game of Thrones.' And you realize, okay, it’s really happening."

The eighth and final season of Game of Thrones was actually the first time that the cast ever got together for table reads, according to costar Lena Headey. In a January interview with Jimmy Kimmel, the actress behind Cersei Lannister confessed, "We didn't do [a table read] until this final season, when we were all in Belfast." And from the sounds of things, Harington wasn't the only one who had a hard time getting through the last script. "It was really emotional, actually," Headey said.

Of course, this is far from the first time that the Game of Thrones cast has reflected on their very emotional final season. Harington said in the January issue of GQ Australia that, "The last season of Thrones seemed to be designed to break us. Everyone was broken at the end. I don’t know if we were crying because we were sad it was ending or if we were crying because it was so f*cking tiring. We were sleep deprived."

However, as he explained, the grueling shoot actually had one upside, as it made it a little bit easier for him to say goodbye to the character of Jon Snow. "It was like it was designed to make you think, ‘Right, I’m f*cking sick of this,'" Harington said, adding, "I remember everyone walking around towards the end going, 'I’ve had enough now. I love this, it’s been the best thing in my life, I’ll miss it one day — but I’m done.'"

As for Game of Thrones fans, they still have one full season of twists and turns before they, too, have to bid Westeros farewell. And, let's face it, everyone is going to be in tears by the end of it.