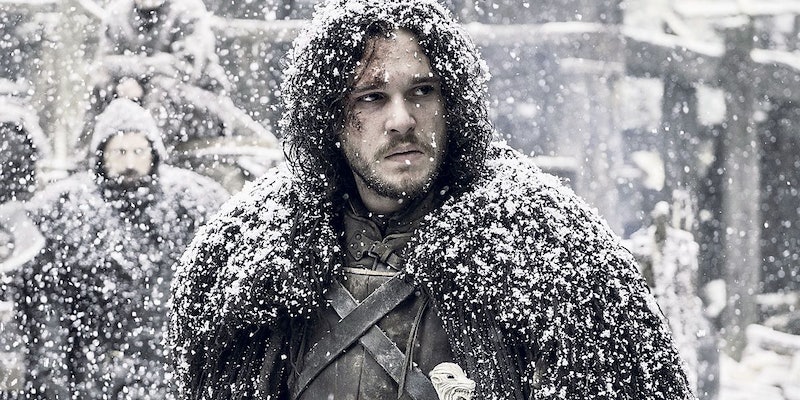 On Thursday, HBO finally sent out a white raven in the form of a live Facebook announcement letting fans know Game of Thrones Season 7 will premiere July 16. With no official trailer in sight just yet, the Huffington Post asked the actor behind Jon Snow what Season 7 will bring for the people of Westeros. While Harington kept up Snow's know-nothing charade when it came to spoilers, he revealed Game of Thrones Season 7 is going to be bigger than ever — even without a 13-episode season.

Since the moment it was announced Season 7 would not only premiere later in the year to accommodate winter finally arriving in Westeros, but the season itself would also feature fewer episodes, there has been concern about how much story the writers could possibly tell. According to Harington, both the wait and the streamlined episode count will be worth it. The 30-year-old actor told Huffington Post,

"They spent an increasing amount of money on less episodes, so it's gonna be much bigger in scale, the CGI ... we're trying new things, experimenting with new camera techniques. I think we’re trying to break boundaries and push past boundaries in these final two seasons."

It sounds like there's definitely going to be more spectacle — could The Wall be coming down, by chance? — but the juiciest part of the actor's scoop involved the characters. He confirmed characters fans have been waiting years to see cross paths would finally meet. Plus, instead of adding more and more new characters, the show will focus in on the existing fan favorites in a big way.

Knowing the players who remain on the board are the most significant ones in the game is a relief. As much joy as a new character like the late, great Oberyn can bring, at this stage in the show, it is time to get serious about the endgame. That means focusing in on the Starks, the Lannisters, Daenerys, and the people who orbit them.

The expansiveness of Game of Thrones has always been part of the appeal, but with only two seasons left, it feels right for all of the disparate characters from different regions to come together. Whether the enemy they face is Cersei on the throne or the White Walkers finding their way into Westeros (or both), seeing them fight these battles together will be the ultimate payoff. Prepare yourselves, because the end of Game of Thrones may be nigh, but there's still plenty of action and surprises waiting for you in the final chapters.