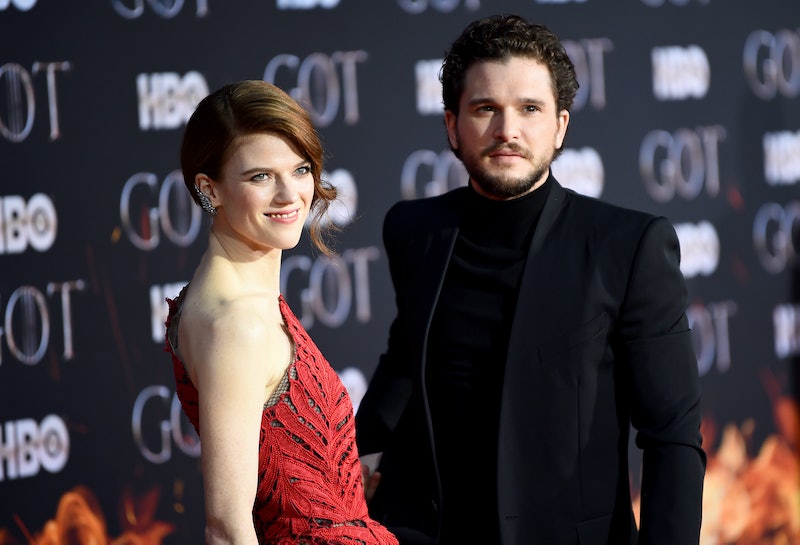 Jon Snow might famously know nothing, but when it comes to making an unforgettable wedding speech, Kit Harington's brother knows a trick or two to keep guests entertained. During a recent appearance on The Tonight Show Starring Jimmy Fallon, Harington revealed that his brother quoted Game of Thrones during his Best Man speech at the actor's wedding to Rose Leslie.

Harington and Leslie — who tied the knot in an intimate ceremony in June 2018 — have both spoken about how Game Of Thrones brought them together and helped them fall in love, but that doesn't mean that Harington was hoping for a wedding full of references to his days in Westeros. Unfortunately for him, his brother managed to work one of the most famous lines from the show into his speech, and even Harington had to admit that it was cleverly done.

Referring to Ygritte's iconic comment, "You know nothing, Jon Snow," Harington admitted to host Jimmy Fallon, "I hate it when people say it, and my brother managed to get it into the end of my best man speech." Still, he admitted, "It was quite sweet actually. He said, 'Looking at the woman you're marrying, it shows you do know something, Jon Snow.'"

However, Harington's wedding isn't the only connection that the actor has to his iconic character: while talking to Fallon about the final season of the fantasy epic, Harington confirmed that the rumors about him keeping a giant statue of himself in his home were, hilariously, true. In January, HBO released a teaser for Season 8 of Game of Thrones that featured Jon, Sansa (Sophie Turner) and Arya (Maisie Williams) wandering through the Crypts of Winterfell and coming face to face with giant statues of themselves in the depths of the tunnel.

According to Harington, he asked to keep his statue when filming wrapped, leaving the show's crew very confused about his decision. "We had a scene where we all come up against our statues, and I said, 'Can I keep it?' and they said, 'Yeah, I guess. If you want,'" the actor recounted. "So I made them ship it my house in England. It's a full size statue! It must have cost them [a fortune]."

He also admitted that he was the only one of the three actors who asked to keep the giant statues of themselves, leading him to joke, "I really have to take a long look in the mirror — or at my statue." Though his keepsake from the Thrones set is a bit unconventional, Harington has come up with a great plan for what to do with the life-size statue of Jon Snow that currently lives in his yard.

"Everyone keeps asking me, 'How is it?' about Thrones ending — and obviously, I'm very sad that it's ending," Harington explained. "And I thought I'd make the statue into a kind of shrine in my garden, that I go and cry in front of." That sounds like a much more touching plan for updating the statue than the one he offered up in January, when he joked to BBC 2 Radio host Zoe Ball, "I’m going to turn it into a water feature I think."

Even though Harington is ready to move on from Game of Thrones it's still clearly a major part of his life as a newlywed. Considering that the actor told Vogue Italia that he and Leslie "fell in love" while filming together in Iceland, it makes sense that Jon and Ygritte will always be an important part of their love story. And now, thanks to his new, unique lawn decor, both Harington and Leslie will be able to reminisce about their time on Thrones every time they look out of the window.