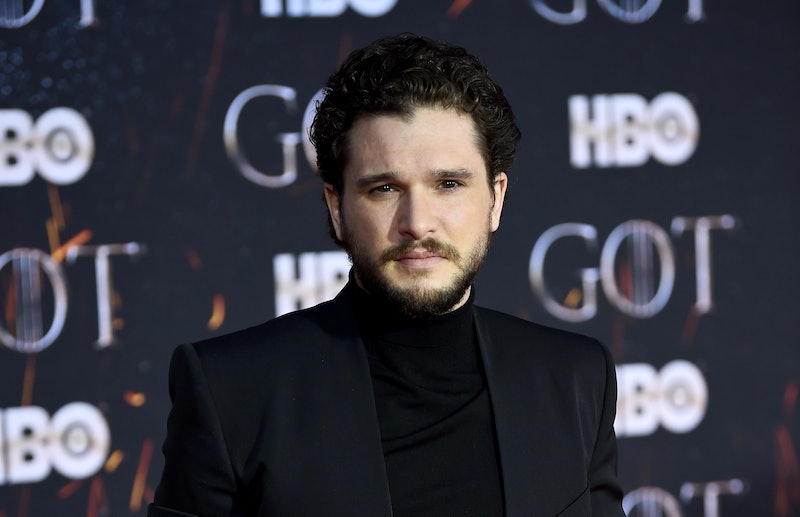 Nearly ten years after it first premiered, Game of Thrones is finally coming to an end, and it seems as if things are officially coming full circle for the show's cast. In a recent interview with InStyle, Kit Harington revealed his final day on the Game of Thrones set mirrored his very first moments as Jon Snow, and the synchronicity will make the final episodes of the show even more bittersweet for viewers.

Describing his last day on the Game of Thrones set, Harington explained, "I think I got my final day changed about 18 times, to the point where I didn’t know when it was. I was like, 'Just don’t tell me.'" Unfortunately, that meant that his actual final scene was rather anticlimactic: "Then it came, and I had that final scene, which was very average," he recounted. "I was just walking somewhere with Liam [Cunningham, who plays Davos Seaworth] and Jacob [Anderson, who plays Grey Worm]. It couldn’t have been more of a wet fart of a scene."

Still, despite the lack of action or emotion in the last scene he filmed, Harington admitted that he was a wreck once his time on the show was officially over. "I completely broke down after it. I’d seen Peter Dinklage do his last scene earlier in the day, and he broke down. I’d been at other people’s wraps, like Sophie Turner’s. You just saw them collapse," he explained. "And it happened to me."

He continued, "It was a beautifully weighted ending. Then it was like, 'OK, I’m actually done with this show. I love it. It’s my pride and joy, and it’s been a pleasure to be a part of it, but I’m done.'"

Perhaps Harington's strong reaction to his final scene is because of the way that it perfectly mirrored the very first thing that he shot as Jon Snow. "My first day on set was [at Castle Black]. My first scene was just a very quick scene where I was just walking down the ramparts," Harington recounted in a video for HBO where he reflected on his time working on Game of Thrones. "I was so nervous, and I was so happy that we started with that."

Of course, now that his time on the show has ended, there are a whole host of emotions that Harington is feeling ahead of the Season 8 premiere on Sunday. "You don’t feel one thing; you feel a hundred," he told InStyle. "Sadness. Elation. Excitement. Dread, definitely. But more than anything there’s just this flickering light at the end of the tunnel."

"Once it’s aired and done, I think I’ll just have this great sense that something’s been lifted off my shoulders. I’ve underestimated how much pressure has gone with the show for 10 years," he explained.

This is far from the first time that Harington has reflected on the emotional ordeal that was filming the final season of Game of Thrones. "The last season of Thrones seemed to be designed to break us," Harington told GQ Australia back in January. "Everyone was broken at the end. I don’t know if we were crying because we were sad it was ending or if we were crying because it was so f*cking tiring. We were sleep deprived."

"It was like it was designed to make you think, ‘Right, I’m f*cking sick of this,'" he continued, adding, "I remember everyone walking around towards the end going, 'I’ve had enough now. I love this, it’s been the best thing in my life, I’ll miss it one day — but I’m done.'"

While his final day on set might not have been the exciting, intense moment he was hoping for, Harington's last moments as Jon Snow are still special. And yes, this is basically confirmation that no matter how Game of Thrones ends, everyone will break down crying when it's over.