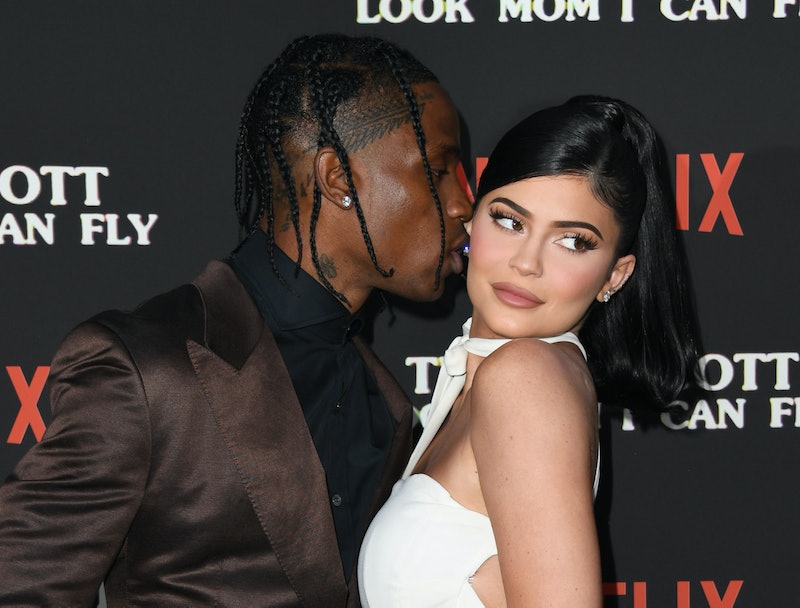 When it comes to the love saga that is Kylie Jenner and Travis Scott's relationship, you may not be surprised to hear that the notoriously gossiped-about couple is officially back on. Speculation had been circling since the beginning of Feb. 2020 when Entertainment Tonight (ET) reported they were "in love" but not together. By the end of the month, Jenner was teasing a possible reunion between them via her Instagram story. But on March 8, a source reportedly told ET that they're officially together again and have been for the past month, so we can put the rumors to rest... for now.

Or can we? Bustle did some sleuthing to see what Kylie and Travis' birth charts say to get to the bottom of this on-and-off relationship.

But first, let's take a look at their history. The two met and got together in 2017 (apparently sharing an "instant chemistry," according to Insider), and less than a year later, in Feb. 2018, gave birth to a now 2-year-old daughter named Stormi. The couple's first two years together were marred by rumors of all sorts, but in Oct. 2019 drama was confirmed, as Kylie and Travis broke up officially. Since then, there have been lots of clues as to how permanent this break-up would truly be.

Their Cosmic Chemistry Is Real

Kylie (born August 10) is a warm and attention-loving Leo, while Travis (born April 30) is a sensual and grounded Taurus. Both signs both share a love for the finer things in life — Leos love to be in the spotlight, while Tauruses appreciate luxury and comfort. Their Sun signs are relatively compatible, as they're both fixed zodiac signs — which, on one hand, means they're hard workers and can identify with each other in the way they express themselves and approach their goals. But on the other hand, this also shows that they can get a bit stubborn when it comes to compromising on what they want.

Based on their birth charts — which look beyond their Sun signs and also take into consideration the placement all of the planets within the zodiac at the times they were born, as well as the relationships that those planets form with one another (called aspects) — there is absolutely no doubt that these two have an intense chemistry. "We can see that Travis' Sun sign is aligned beautifully to Kylie's ascendant, which is also known as a rising sign and illustrates our surface-level personality," says pop culture astrologer Kyle Thomas. "This denotes great relationship compatibility and a synergy between them."

A positive trine aspect (which occurs when planets are at a 120° angle from each other and can be one of the luckiest aspects in astrology) between Kylie's Mercury and Travis' Sun gives them a naturally strong ability to communicate and understand each other — which is important when it comes to co-parenting, and probably is why they stay in regular contact and keep a good rapport, even when they're not together. Communication is a major foundation in relationships, so this is something they can rely on when the going gets tough.

But The Stars Show There's Trouble In Paradise

Don't hold your breath for a lasting love story though, because a little drama is cosmically inevitable here. "They must put in work to make their connection remain strong because they both can be very stubborn," Thomas says. As fixed signs, the pair shares a common goal, so they can be very in sync — but if Kylie's Leo Sun gets too self-centered and dramatic or Travis' Taurus Sun becomes too stubborn and cranky, there could be issues.

Oppositions between love planet Venus and sex planet Mars in Kylie and Travis' birth charts indicate a super strong sexual and romantic attraction, but also shows that the couple could end up feeling competitive and overly-intense with each other. This kind of intensity could lead to possessiveness (and the subsequent need to take space from each other) — so their pull to come back to each other repeatedly makes sense.

Coming together is easy for this them — but staying together is what proves difficult, as we've seen. According to a compatibility report Bustle ran on AstroLibrary, "Kylie and Travis are attracted to each other from the moment that they first meet and continue to experience excitement and joy in each other's company. Despite this sense of adventure, [they] may have trouble maintaining a committed, long-term relationship."

A tough square aspect (which occurs when planets are at a 90° angle from each other and is one of the most challenging aspects to navigate) between Kylie's Jupiter and Travis' Sun also points to an almost magical, fireworks-filled start to the relationship that could end up being tense and filled with insecurities down the road. Once the bliss of getting back together and rekindling starts to fade, these two strong personalities might find themselves clashing in battle of the wills. They each have a deep-rooted need to assert their individuality, which can make compromising and making concessions for each other a difficult task.

So Are Kylie & Travis Meant To Be Star-Crossed Lovers?

Astrologically, it's no surprise this Leo and Taurus are drawn to each other — there's a lot of cosmic compatibility going on between them — but as their birth charts show, it may be time to prioritize the others' needs if they want lasting power as a couple.

"Kylie and Travis have a lot of similarities, but ultimately do need to learn to compromise," Thomas says. Learning to embrace more of a give-and-take approach just might be key to making this next go-around work out in the long-term.