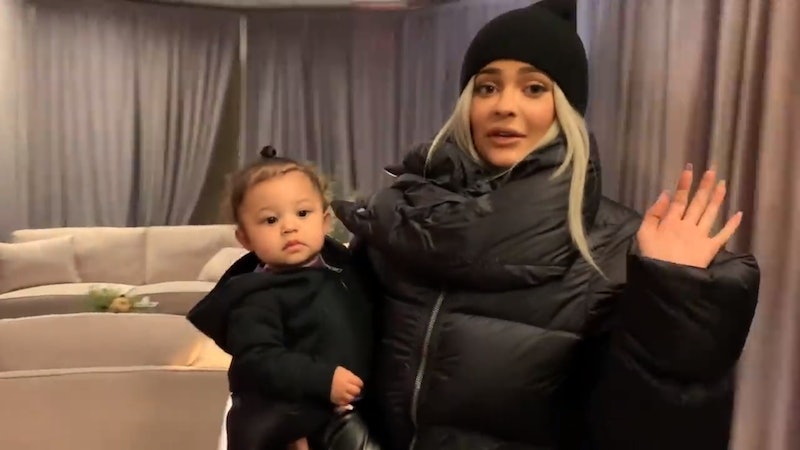 Brace yourselves; there's an inordinate amount of cuteness ahead. In an Astroworld tour vlog post, Kylie Jenner shared a new video of Stormi that will leave you marveling at just how much she's grown. While it may seem like it was just yesterday that the 21-year-old shared a video detailing her emotional pregnancy journey with fans, it's actually been nine months since little Stormi Webster made her world debut. Now, the adorable tot is old enough to go on tour with her famous parents — Jenner and rapper Travis Scott — and completely steal the show. (That's no easy feat when your dad has a roller coaster in his concert, either.)

In the new video, Jenner shares a look at what life's like for her and Stormi on the Astroworld tour. It turns out the 9-month-old is treated to her own room at every venue. This keeps her away from the crowds and noise, while she gets a sweet setup with her own pink walker, a TV to watch her dad on, and lots of people to hand her toy peppers. She basically looks like the most relaxed kid in the world as she chills backstage with her mom and her entourage.

Being on tour does bring a downside though. At the start of the video, Jenner reveals that she asks the paparazzi not to take photos of Stormi while her security team is getting the baby settled in the car. However, some of the eager photographers ignore the business mogul's wishes, which is frustrating both because Stormi is so young, and because having that many flashes go off could be scary for her. Besides, as the video illustrates, Jenner has shared plenty of footage of her daughter this year, so it would be nice to see her wishes respected. She shares Stormi updates on her own terms, and every little peek into her daughter's life is a sweet treat for fans.

That being said, this may very well be the most Stormi footage that Jenner has shared at once since her daughter's birth. Fans are sure to be surprised by just how much the little girl has grown up over the past few months. Not only is she pulling herself up and standing on her own, she's also mastered the art of saying "da-da." When Jenner tells her that they're heading to see Scott, Stormi's face lights up as she starts saying "da-da" over and over.

In another clip, Jenner and Scott are chatting when Stormi's shoe flies off, which is one of the most aww-worthy worthy moments in the behind-the-scenes footage. The Astroworld stuff is great and all, but it simply cannot compete with the sheer cuteness of little Stormi. She hasn't even had her first birthday yet, but she's already chattering away and making everyone backstage melt.

Precious few 9-month-olds know what it's like to go on tour with their parents, but it definitely feels like Stormi is blazing a trail for babies everywhere. Life on the road with your parents and entourage looks pretty great, especially when your doting mom and dad make sure you have your own room, lots of toys, and all of the attention you could possibly need. Take note, toddlers everywhere, because Stormi is showing you how to live your best baby life.