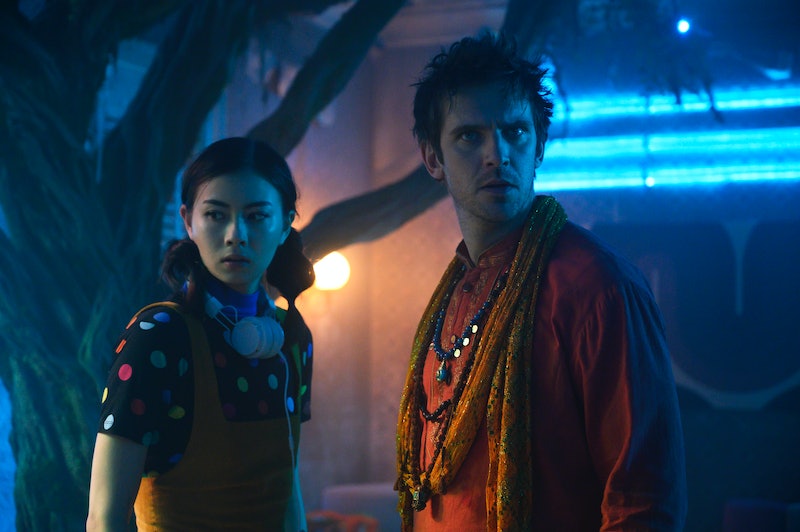 Who will emerge victorious in the final battle between Legion and the Shadow King, the hero or the villain? And which is which? The lines between good and evil have blurred beyond recognition at this point; but even if Legion won't return for Season 4 after Monday's finale — and even if the finale doesn't fully redeem David Haller as a "hero" — at least fans of the FX series will receive the planned ending to the mutant's story.

That wasn't necessarily a foregone conclusion. Television shows based on Marvel characters have been dropping like flies recently, as Disney consolidates its properties in advance of launching its own streaming service, Disney+, later this year. On Netflix, every single Marvel series has gotten the ax over the past year — Daredevil, Jessica Jones, Luke Cage, Iron Fist, and The Punisher — while Agents Of S.H.I.E.L.D. will be wrapping up its run on ABC next year after seven seasons.

Add to that Legion's own waning ratings (plummeting from 1.6 million viewers for its Season 1 premiere to a mere 315,000 viewers for the Season 2 finale), and a third season was never a given in the first place. Fortunately, the network allowed creator and showrunner Noah Hawley (who also created the multi-Emmy-winning anthology series Fargo for the network) to craft his ambitious superhero show a proper farewell.

Despite those low ratings, FX renewed Legion for Season 3 in June of 2018; and in February of 2019, the network announced that the upcoming third season would be the show's last, per Hawley's plan. FX CEO John Landgraf told reporters at the Television Critics Association winter press tour that month that Hawley had always envisioned David Haller's story to be a three-season arc, and Hawley himself stated that "endings are what give stories meaning," according to The Hollywood Reporter.

"I always thought about this as a complete story, and it felt like three acts of a story," Hawley said during the TCA panel. "What the show is following is this cycle of mental illness. We met David who had been at his lowest point and tried to kill himself, then he meets Syd and he gets balanced out. He's on his meds. He gets out and everything's going great for a while, and he thinks maybe I don't need these meds. He goes off meds the and spirals down, which is where we find him now," at the end of Season 2. "The question now is can he get back to some kind of good place, or is he gone for good? Once we tell that story it feels like we'd be going back to the beginning of the cycle."

So, Landgraf and Hawley are claiming that Hawley always had a three-season plan, and that the network is allowing him to see it through to its completion, regardless of ratings or corporate maneuverings. But, as is always the case on Legion, reality may not be quite so clear-cut. Back in April 2018, on the day of the Season 2 premiere, Hawley gave an interview to the Observer during which he seemed a lot less set on his long-term plan for Legion than he later claimed during the 2019 TCA panel.

"Well you definitely have a sense by the end [of Season 2] of where we're going in the third year," the showrunner told the Observer. "It feels like we're following the story toward its conclusion. So it's not a show where each year there's a new villain and the end of the table. It's a three or four or five act story where each season is another chapter in that story."

According to that statement, after finishing filming Season 2, Hawley still wasn't sure whether he had one, two, or three seasons of story left to tell in David's journey. Maybe he did ultimately decide he only needed eight more episodes to complete the story… but it's also possible that he was planning on more, and FX told Hawley that he only had one more season in which to wrap things up.

The balance between the creative side of television as art and the pragmatic side of television as business is always a delicate dance. Whoever's decision it was to end Legion with Season 3 — Hawley's or Landgraf's — at least the decision was made in time to allow Hawley to craft an actual end, rather than canceling the series abruptly, leaving viewers with no resolution. Whether that resolution will be satisfying is another matter entirely; fans will have to decide that for themselves when they tune into the Legion series finale on Aug. 12.