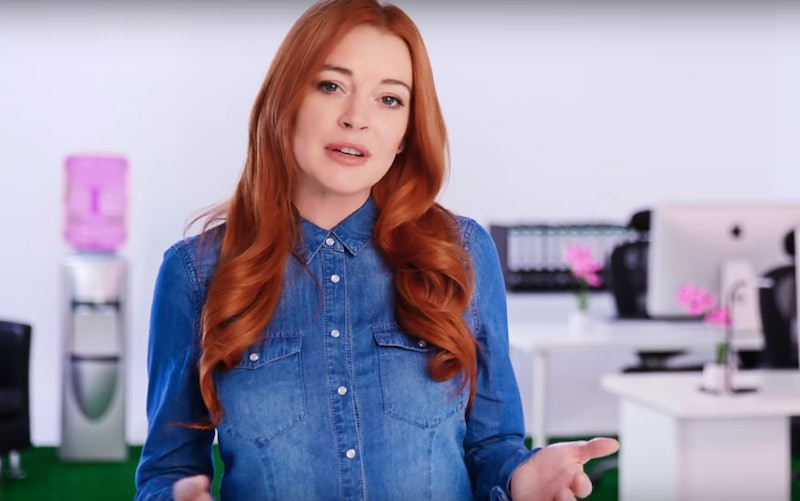 Celebrities endorse all kinds of things — shampoo, wine, underwear — but this may be the first time lately that one has endorsed a site dedicated to offering people free legal advice. As reported by BuzzFeed, Lindsay Lohan is Lawyer.com's new spokesperson, and yes, it is an odd career move for the Mean Girls actress to make. But it's also a bold one.

In the instant classic commercial, Lohan actually references her past brushes with the law. In fact, she even cracks jokes about them. The actress says,

When Lawyer.com first reached out to me, I was confused and a little scared, because I thought I was in trouble. But when they asked me to be their spokesperson, I was intrigued.

Lohan goes on to acknowledge that she's had more than one DUI, and suggests that she knows a thing or two about needing a lawyer. In the past, the 31-year-old has been open about her struggles with substance abuse. Now, it feels like Lohan is taking control of her own narrative with the unexpected new gig.

An ad for Lawyer.com feels like a strange place to see Lohan appear, but she's clearly having fun in her role as the site's spokesperson. In addition to the commercial, there's also a collection of behind-the-scenes outtakes that'll be a real treat for the actress' fans. Watching her laugh and joke with the crew is a reminder of just how talented The Parent Trap actress is — she's always had serious comedic chops, and her new role proves that some things never change.

Even though it's been a while since you've seen Lohan in front of the camera, she's been forging a new path for herself for quite some time now. The actress has long been passionate about charitable work, and in 2016, she began making headlines for making trips to Syrian refugee camps. She's done everything from buy books for Syrian children in need to meeting with the president of Turkey about humanitarian projects.

While some people have tried to turn Lohan's work into a joke, it's clear that she's trying to make a positive impact in the lives of refugees. The Mean Girls actress may not be making waves in Hollywood right now, but she's been putting her celebrity to good use. On New Year's Eve, the 31-year-old shared a since deleted video on Instagram in which she expressed her belief that 2018 would be a great year for her. According to E! Online, she said,

This year is gonna be an amazing year for me. We have new, incredible things that we're doing with Saudi Arabia and women empowerment and I just want to thank all the supporters that have been there for me in my whole life. God bless everyone.

Did Lohan know then that 2018 would lead to her becoming a Lawyer.com spokesperson? Who knows, but the actress is definitely making the gig work for her already. Not only does it have social media buzzing, the commercial is an unexpected treat for her fans.

In the best possible world, Lohan's new gig would lead to her taking on new movie and television roles, because it would be seriously amazing to see her back onscreen. However, no one would ever call Lohan predictable, since she's been doing things her own way since, well, forever. Her latest role won't necessarily lead to a Mean Girls sequel or to her appearing in Life-Size 2 with Tyra Banks, but it definitely proves that the actress' sense of humor is firmly intact.

One thing is for certain, if you ever find yourself needing a lawyer, you'll now know who to call thanks to the one and only Lohan.

More like this
22 Movies On Netflix That Are Perfect For The Whole Family
By Bustle Editors
Amanda Seyfried Says She Felt Pressured To Shoot Nude Scenes At 19 Years Old
By Jake Viswanath
The Sean Bean Intimacy Coordinator Controversy, Explained
By Sam Ramsden
Christina Perri Had No Idea Her 'Twilight' Song Is On YouTube's Top 100 Chart
By Radhika Menon
Get Even More From Bustle — Sign Up For The Newsletter