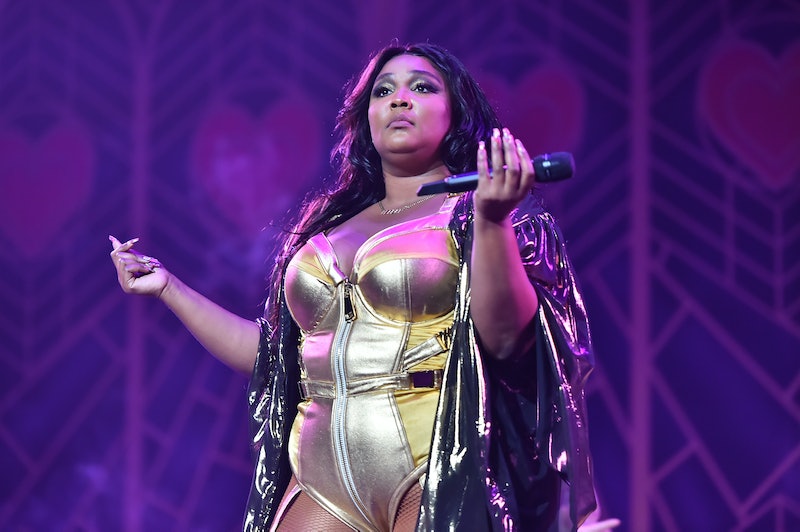 Lizzo has seen the most recent installment of Saturday Night Live’s “Weekend Update” segment, and the singer is feeling good as hell about a reference made by Bowen Yang’s character. On Tuesday, Oct. 8, Lizzo responded to Yang’s SNL shoutout on Twitter, writing that she “can’t believe” her name popped up in an episode of the long-running sketch series. She also called Yang “brilliant.” Yang quote-tweeted Lizzo's post, tweeting, “HI. LOOKED UP YOUR VMA PERFORMANCE LAST NIGHT AGAIN JUST TO CRY.”

As if this Twitter back-and-forth between the SNL actor and the “Truth Hurts” musician was not enough to handle, then Lizzo went and quote-tweeted Yang’s reply and added, “IM CRYIN... CUZ I LOOOVE YOUUUUUU.” Yang also posted a picture he took at a Lizzo concert and tweeted, "THE MOST BEAUTIFUL PHOTO I EVER DAMN TOOK WAS AT UR BROOKLYN STEEL SHOW."

Lizzo and Yang connected on Twitter after Yang appeared on the SNL's "Weekend Update" segment as a Chinese trade representative named Chen “Trade Daddy” Biao. (As HuffPost noted, Chen Biao is a fictional character.) In the scene, Yang's Chen Biao remarked he has been receiving a lot of attention lately because he is “the top tariff task master," calling himself “basically the Lizzo of China right now.” Then, he went there with the "Truth Hurts" line: “Turns out I’m 100% that Trade Daddy.”

It has been a big year for Yang. On Sept. 12, SNL revealed the Las Culturistas podcast host and lip sync artiste has joined the iconic series' roster. This casting decision made history: As Deadline noted the day of the announcement, Yang is the show’s first full East Asian cast member. He made his debut on the first episode of SNL Season 45, which aired on Sept. 28.

Yang is only two episodes in, and he has already given viewers the gift of his Trade Daddy character. And after his second episode aired, the inimitable Lizzo took to Twitter to say "ilysm" and call him "brilliant."

Lizzo is having a pretty major 2019, too. Her 2017 single "Truth Hurts" climbed to the top of the Billboard Hot 100, and in September it became the longest-running No. 1 song by a solo female rapper. The single also inspired a popular meme. At the 2019 MTV Video Music Awards, Lizzo delivered a memorable and empowering medley of "Truth Hurts" and "Good As Hell." As Billboard reported in September, her 2019 album Cuz I Love You has become certified gold. She and her flute appeared in the hit movie Hustlers alongside Jennifer Lopez, Constance Wu, Keke Palmer, Lili Reinhart, and Cardi B. There was her recent Twitter exchange with Cookie Monster, which took the "I just took a DNA test" meme based on "Truth Hurts" to delicious heights.

On Jan. 4, Yang tweeted that he has "listened to 'Juice' by @lizzo a desert-island amount of times." Nine months later, Yang was on SNL dropping Lizzo references on "Weekend Update." Lizzo is not one of the musical guests listed on the SNL 45 calendar...so far.

More like this
The Black Lotus Staff Has "Had Enough" In The 'White Lotus' Spoof From 'SNL'
By Brad Witter
Who Is Pete Davidson Dating? He & Chase Sui Wonders Got Caught Kissing
By Jake Viswanath
'The Last Of Us' Has Revived The Inspirational "Hopepunk" Trend
By Sophie McEvoy
Yes, 'The Price Of Glee' Is Available To Watch In The UK
By Catharina Cheung
Get Even More From Bustle — Sign Up For The Newsletter
From hair trends to relationship advice, our daily newsletter has everything you need to sound like a person who’s on TikTok, even if you aren’t.