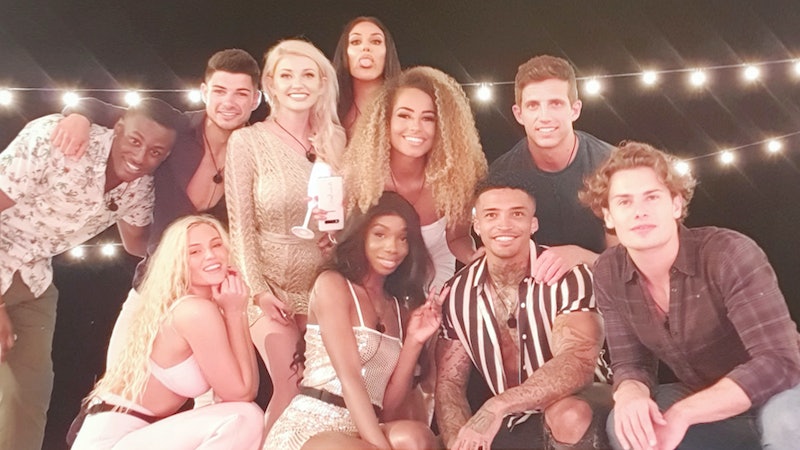 The best thing about Love Island isn't the constant dramz or even the amazing voice over courtesy of Iain Stirling, it's the commentary you and your pals come up with while watching it. Agreeing or disagreeing about who you'd all like to couple up with IRL is what it's all about. So, now that another summer of love is in full swing — thank goodness —it's time to resurrect the group chat, but if you're at a loss for what to call it, here's a few suggestions for some of the best Whatsapp group names for your Love Island gang.

Let's face it. From the moment you wake up each day during this summer of love, "is it 9 p.m. yet?" will be the question you'll be asking from breakfast through to dinner. The sweet, sweet bliss of 9-10 p.m. is dedicated to Love Island and Love Island alone. Forget a social life. Who needs one anyway?! Nothing says it better than this Whatsapp group name.

There's sort of a running joke that Love Island always seems to fly in a relative of someone famous. In 2016, we had Miss GB, in 2017, it was Marcel from Blazin' Squad, 2018's series had Danny Dyer's daughter, Dani, er, Dyer (I still can't get over that name) and now 2019 has none other than boxer Tyson Fury's brother. Despite Tommy Fury stating he won't be relying on his brother's name to get ahead, as Bustle has previously reported, I have a sneaking suspicion it'll crop up once or twice, so why not get in on the joke early?

What is Love Island without memes? You need those memes, and you need them now. This show makes for some incredible reaction GIFs, and there are some contestants that you just won't be able to take seriously. They need to be memed immediately, and you and your pals all understand the urgency when it comes to seeking out the best ones out there. Use this group as your source of never-ending memes.

To quote Anton, if you haven't got great chat, it's just a waste isn't it? Make sure you have those same standards for your Love Island Whatsapp group. Great chat only, guys, or you'll be left standing by the fire pit.

It Is What It Is

I swear, the 2019 islanders used the phrase "it is what it is" within the first half an hour of the show more than anyone ever said "do bits society" last year. It's a very apt phrase though, and — let's be real — it's very British. "It is what it is" feels like the stiff-upper-lip, hide-your-actual-feelings attitude that we Brits have come to know and love. I love that we already have a 2019 motto, and I hope there are many more to come.

The loveable Iain Stirling must have uttered this phrase at least three or four times in the first episode of the series, and I'm guessing there's a lot more where that came from. If Stirling deems something funny, then who are we to deny him? Show some respect to this great man by honouring him and his 2019 jokes with your Whatsapp group name.