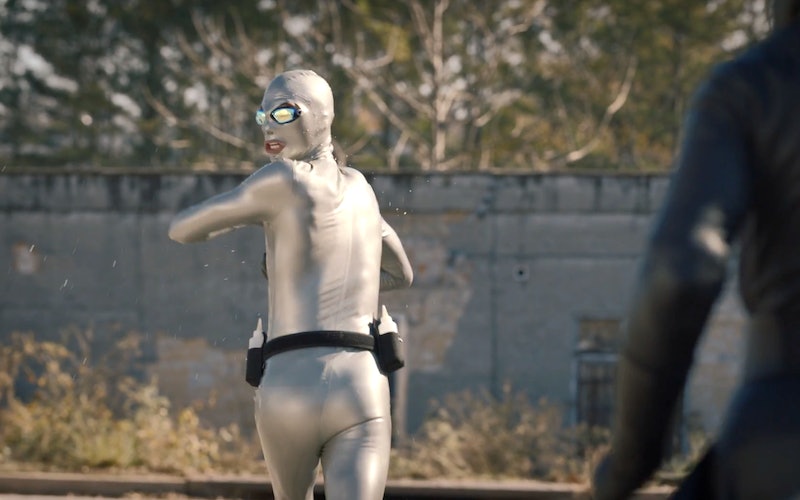 The costumed adventurer known as Lube Man was only in one minute of the entire first season of HBO's Watchmen, but he grew a devoted fanbase on the internet nonetheless. Although he never appeared in the series again, showrunner Damon Lindelof decided to reward fans of Lube Man via the supplemental materials on HBO.com. As many suspected, the identity of Lube Man on Watchmen is none other than FBI Agent Dale Petey if a document on the Peteypedia is to be believed. Petey was a member of the Anti-Vigilante Task Force, but like his colleague Laurie Blake, it seems he had some personal experience with masked vigilante behavior too. While it's rather devastating that the silver spandex-clad Lube Man never returned to Watchmen after he first appeared in Episode 4, the document on Petey's own repository at least revealed which dude was behind the lube.

Dustin Ingram's historian turned federal agent Dale Petey joined Laurie in Tulsa to investigate the death of Judd Crawford in the third episode of Watchmen. While he was rather inexperienced when it came to being an FBI agent, he displayed his vast knowledge of and fascination with superheroes in HBO's supplemental site Peteypedia. Through the site, Petey provided invested viewers with additional information about what happened in between the comics and the series, as well as more details on the events featured in the show.

Lindelof told Vulture that he decided to "reward" readers of the Peteypedia by giving "strong indications as to the identity of Lube Man" in a document posted to the site following the finale.

A memo from FBI Deputy Director Max Farragut informed readers that Petey has been fired from the agency. While the TV series didn't show it, Farragut had ordered Petey to return to Washington, D.C., following the deaths of Lady Trieu and Senator Joe Keene. Petey refused and so Farragut terminated his employment with the FBI. Farragut claimed that Petey's files on Peteypedia display that he is "at risk for vigilante behavior, and most likely, always was." The memo also told agents that they can take any of the "junk" from Petey's office, including "a jug of what appears to be some kind of canola oil."

Lube Man earned that title because of his use of lube (apparently, oil) that he squirted on his body to slide through a sewer grate in "If You Don't Like My Story, Write Your Own." He had been spying on Angela's Sister Night as she dumped evidence of her grandfather's involvement in the death of Judd Crawford. As being a masked vigilante is illegal, Angela then chased him before he literally slipped away into a sewer grate. Fans had already come up with the theory that Petey was Lube Man, not only because of his lean build but because of his fanboy interest in superheroes. Now, Lindelof and his writers are mostly confirming that's the truth.

Lindelof told Rolling Stone that the Peteypedia memo wouldn't "definitively answer" who Lube Man is, "but it will certainly add lube to the fire." But he also added to Entertainment Weekly that "all the clues are there to reach the obvious conclusion." So while it's not 100 percent certain, the hints that Petey is Lube Man is about as absolute as the creator behind Lost, The Leftovers, and Watchmen is willing to get. And if there is another season of Watchmen from a different storyteller, Lindelof told Vulture he invites them to explore the unlikely tale of Lube Man, who "captured the hearts of America" in a single slippery scene.