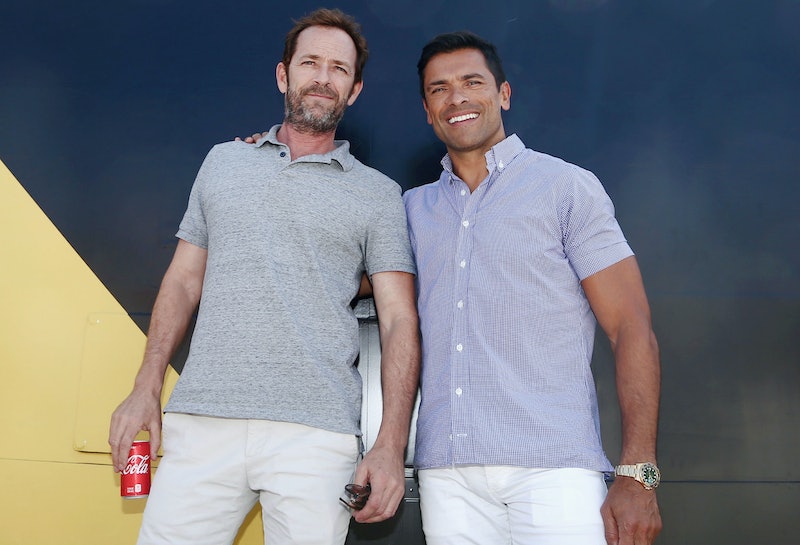 It's been almost two months since the Riverdale star's death, and now Mark Consuelos is opening up about Luke Perry in a new interview with Esquire that was published on April 25. This is the first time Consuelos has talked in detail about his late costar since he died on March 4 at 52 after suffering a massive stroke. Consuelos' comments not only speak to the amazing person that Perry was, but also show how much he meant to him.

Most everyone from Riverdale has discussed Perry in some way, shape, or form, all while reflecting on his overall goodness. Consuelos followed in his is coworkers footsteps by telling Esquire,

"All the great things you've heard about Luke? They're all true. That's who he was. He was an amazingly generous, kind person. You can't fake that. He was one of the good ones."

Consuelos and Perry met right before the former All My Children actor came on Riverdale as Hiram Lodge. Even though they'd only known each other for a short time, Consuelos felt like he'd known him for years. The two connected on a deep level. He said about Perry,

For Consuelos, he said Perry impacted him greatly and that he truly is thankful to have known him. "I feel grateful that maybe I was a passage, a page or two, in a chapter of his life," he said.

For anyone wondering why it took so long for Consuelos to speak out about Perry, he explained his reasoning to Esquire. First of all, the 48-year-old revealed he remembered Perry alongside his fellow cast, but just out of the spotlight. He also reached out to Perry's family directly. He said, "I commiserated with my cast, we spent time together, we had meals over it. I reached out to the family and said what I had to say to them. That's all that was important to me."

"You know, about [grieving in] the public eye, sometimes it becomes about something else and I don't necessarily like that. It's not about me; it's about Luke."

Everyone grieves differently and if a person wants to honor someone on social media, well, that's up to them. Consuelos seems to feel comfortable enough now talking about Perry publicly, but he understandably wants to make sure the focus always remains on his late friend.

Perry's final Riverdale episode aired on April 24. It was definitely a sad moment for fans. That said, his character, Fred Andrews, was last seen doing what he always did best — supporting his son, Archie, and being a great father figure. It remains unclear how the drama will handle Fred's character moving forward. Whatever the case, there's no denying Perry will forever be part of the Riverdale family.

Like Consuelos and so many others have repeatedly pointed out, Perry was "one of the good ones." They will certainly never forget the man Perry was or how he impacted their lives for the better.