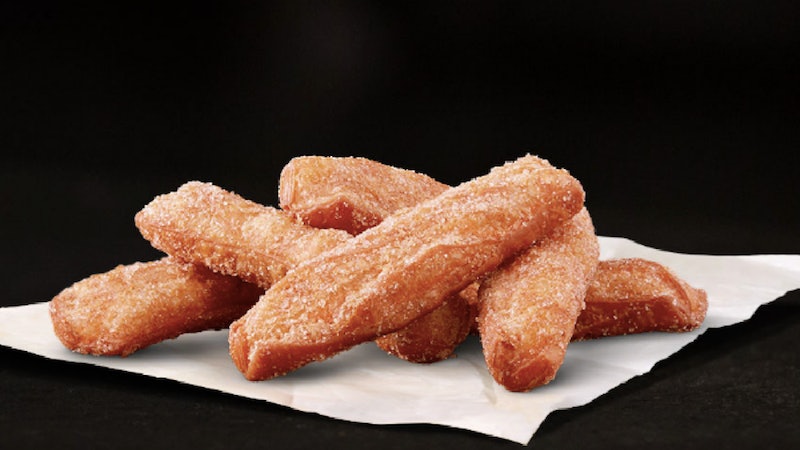 There are a few big dilemmas in this life — chocolate or marshmallow? Donuts or chocolate? Marshmallow or donuts? You know, the big and meaningful questions of our existence. Well, now you need to dilemma no more. McDonald's has brought donuts, chocolate, and marshmallow together in the most glorious way possible. The McDonald's Donut Sticks chocolate marshmallow dipping sauce is about to change your life.

If you haven't experienced the McDonald's Donut Sticks until now, it's about time you stepped up to the plate. These fried, sugary godsends are a total game-changer. The donut sticks were announced earlier this year and were a huge hit — though they bore a striking a resemblance to Dunkin's Donut Fries, drawing comparisons between the two. But the bottom line? Donuts are great and they're even more delicious in stick form, so I'm not complaining. Every company in the world can come up with their own version of donut sticks, as far as I'm concerned. But now, the internet is buzzing over the fact that some McDonald's locations are reportedly providing a dipping sauce straight from your childhood dreams. Semi-sweet chocolate, marshmallow — it's the perfect addition to the fried, doughy goodness of the donut stick. Not only that, in perfect McDonald's form the sauce is served in a ketchup-style plastic pouch. It looks more like chocolate than marshmallow — but it promises both of those delicious flavors, mingling in perfect harmony.

The internet first became alight with news of this new nectar of the gods when Ian K of the Peep THIS Out Youtube channel posted a review of their dipping sauce — and then the word spread. The sauce seems to be available with the six donut stick or 12 donut stick options and, according to the video, it's a culinary triumph.

There's no sign of the sauce yet on the McDonald's website, but it was spotted in Southern California. Donut Sticks are available at participating locations and were brought in as a limited edition treat — so you may want to move fast.

If you're a donut lover, there are plenty of ways to show your passion for that doughy bundle of joy. You can enjoy the amazing-looking Krispy Kreme Stuffed Original Donuts, which first made an appearance in the UK before moving stateside. Or, if you prefer to just wear your appreciation, the eos Sprinkle Donut lip balm is looking so epic that it already has a huge waiting list — so you may want to get in line. Donut bouquets, donut cereals — there are no limits to the way that donuts can improve your life. Or, you could just show your love by carrying a dozen donuts around with you and eating them wherever you go. I call them walking donuts. They are a joy, a political statements, and a way to navigate this crazy thing called life.

All of the deets on the new McDonald's Donut Sticks chocolate marshmallow dipping sauce is still just beginning to come to light — but the internet is already freaking out. If you're lucky enough to stumble across this sauce at a participating location it is your obligation — your duty — do go forth and dunk that stick. Do it for all of us.