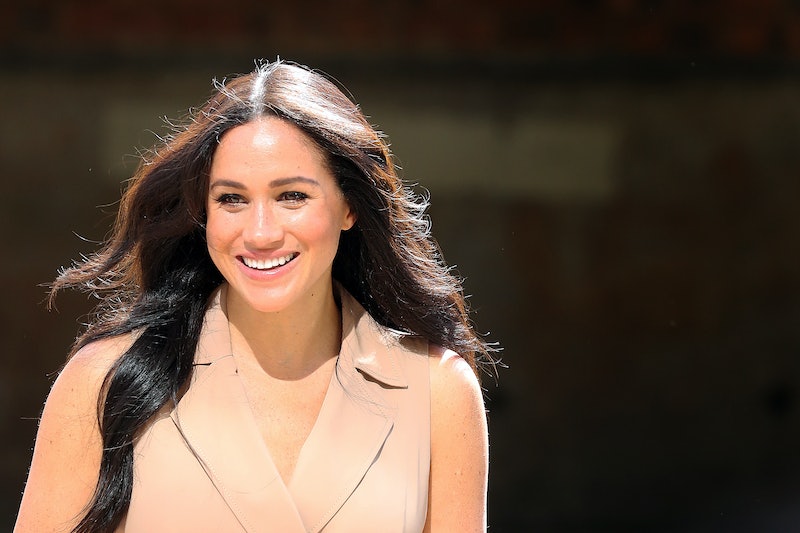 Meghan Markle and husband Prince Harry have been on a royal tour of southern Africa. The pair have visited multiple charities and NGOs as well as greeting political and community leaders. Of course, the couple's activities are the most important aspect of the trip, but Meghan Markle's affordable clothes from the tour can't be ignored by fashion lovers.

In the early days of Markle's time in South Africa, many noted that the Duchess of Sussex wasn't wearing her engagement ring. The three diamond ring with an updated pavé band was replaced with a delicate turquoise and gold piece by designer Jennifer Meyer. According to reports, the replacement was done so that the Duchess of Sussex could remain "low-key." After all, the Prince Harry-designed ring is one of the world's most famous pieces of jewelry now.

It appears that the new, more demure ring was a sign the Duchess's fashion would also be less luxe than it is when she's home in the United Kingdom. While Markle has the fashion world at her fingertips — she commonly wears bespoke Givenchy after all — her style choices during the tour of southern Africa were nearly all re-worn items and affordable finds. Markle's tendency to choose these items certainly seems to insinuate a more restrained approach to style for the trip.

Markle's royal tour rewears and affordable fashions not only provided a look into what could be some of her favorite pieces, but the styles also provide a way for her fans to cop her Duchess style. From Madewell denim jackets to an Everlane jumpsuit, several of Markle's affordable pieces are still available to shop.

Here are all the affordable pieces Markle wore on tour that you can still buy.

During Markle's first appearance in South Africa she chose not just affordable wedges but also ones she's donned in the past. The Duchess' Castañer espadrilles were first seen during she and Prince Harry's royal tour of Australia in 2018.

In one of Markle's most casual looks of the trip, she wore multiple affordable items including this Madewell denim jacket. The piece comes in a classic, distressed wash and retails for under $115.

The Looker in Not Guilty
Mother Denim
Sizes 23-34

Mother is one of Markle's most commonly repeated brands, and she brought back her Looker jeans in the Not Guilty wash for her trip to South Africa. The Duchess of Sussex first became known for wearing the brand when she attended the 2017 Invictus Games in Toronto with Prince Harry.

The Duchess didn't wear just one Madewell piece while in South Africa. She paired her denim jacket and jeans look with a canvas tote from the brand as well. The olive bag comes in three different colors on the brand's site and can be personalized if you'd like.

Markle's woven Brother Vellies flats are a bit more pricy than some of her others (like her Birdies or Rothy's), the shoes are markedly less expensive than her Aquazzura flats.

Markle was on a roll when it came to wearing flats during this trip. After all, she was on-the-go quite a bit, and no amount of CBD cream can help that. These Sam Edelman flats were paired with an olive maxi dress for a casual look as Markle and Prince Harry visited a mosque.

Markle's $120 Everlane jumpsuit is somehow still available. The black, tie-waist piece was first seen on the Duchess as she worked as a guest editor for British Vogue. She brought it back in South Africa when she visited The Woodstock Exchange and mothers2mothers.

Markle chose not one but two low-priced items from chic, minimalist brand Everlane while in South Africa. The Duchess wore the brand's "The Editor" flats in persimmon with an (unfortunately) sold out Aritizia Wilfred dress while visiting Victoria Yards.

Banana Republic's Trench Dress is another low-priced find for fans of the Duchess' style. The classic piece retails for under $150, but sizing is limited thanks to the Meghan Markle effect. As of press time, only sizes 8-14 remain.

Markle's low-key and minimalist style during she and Prince Harry's royal tour may have consisted of several reworn pieces fan had already seen, but for those who want her style, the trip also gave them tons of affordable style inspiration.