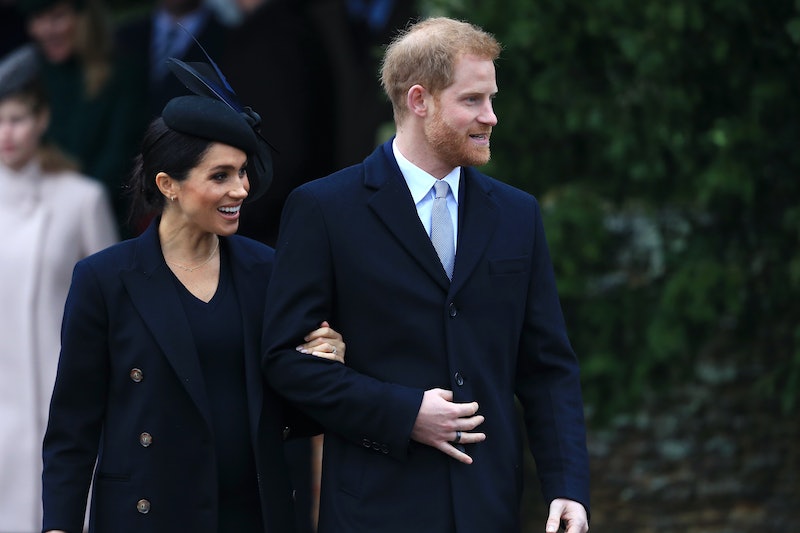 Christmas time is here for the royal family, and that means new royal ensembles to marvel over. From Kate Middleton's berry toned coat to Meghan Markle's feather hat, there's a lot of great holiday style moments. However, Meghan Markle's Christmas outfit may have just had something a bit more special about it, and it shows just how supportive a friend the Duchess of Sussex is.

According to Women's Wear Daily, Meghan Markle's Christmas ensemble was by none other than friend Victoria Beckham. The choice makes total sense if you look at both the traditions of the royal family and at Markle's previous style choices.

With so many people paying attention to their fashions, the British royal family tends to stick with UK based designers. This is true for everything from award ceremonies — like when Kate Middleton attended the Tusk Conservation Awards in a Jenny Packham rewear — to bridal gowns — like Markle's Clare Waight Keller designed wedding dress. To see Markle in an outfit crafted by Victoria Beckham isn't exactly a shock, and while it doesn't seem to be an official rule of the royal family ( there is, after all, no handbook that's public), British designers as commonly found in their wardrobes.

Markle's Christmas outfit was almost entirely composed of Victoria Beckham's designs. From her boots to her coat to her bag, she was totally decked out in the former singer turned designer's pieces. Markle looked stunning in the monochromatic look as she made her way to Christmas Mass with husband Prince Harry and brother-in-law and sister-in-law Prince William and Kate Middleton alongside the rest of the royal family.

Of course, seeing Markle wearing Beckham's designs isn't notable just because Beckham is British. There's also the fact that the two women are friends in real life. According to a source for The Cut, Markle and Beckham became after the former Suits star became engaged to Prince Harry. Now, Markle is rocking her friend's designs on Christmas Day!

Markle's Victoria Beckham Christmas look isn't the first time that the Duchess has supported her stylish friends, though. Like Beckham, Markle's friend Serena Williams has her own clothing line. As she has now done with Beckham, Markle wore a piece from Williams' line.

While on a royal tour of Australia with husband Prince Harry, Markle wore a stylist, slightly oversized blazer from Williams' collection. The duchess paired the plaid blazer with a pair of black jeans and a white button up shirt while visiting the country, and the piece soon became a hot commodity on Williams' site. While Markle may have worn a full Victoria Beckham ensemble because the designer is British, it's also very possible that Markle wanted to support her friend as well.

Even if you were a bigger fan of Markle's sister-in-law Kate Middleton's ultra festive crimson coat and headband, it's hard to deny that the newest duchess looks great on Christmas, and the fact that she's supporting her friend makes it even better.