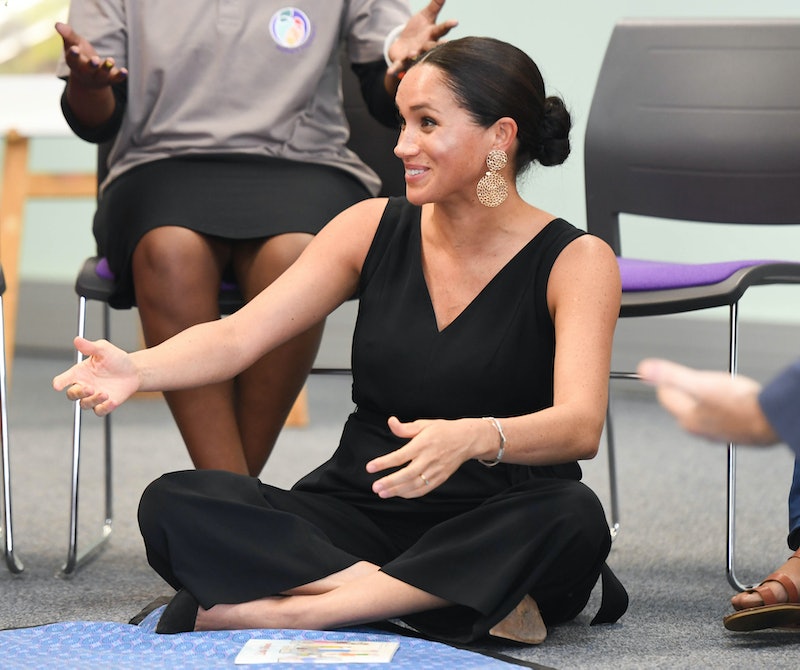 Meghan Markle is currently in South Africa with husband Prince Harry and son Archie on a royal tour. While in the country, Markle has been on a major outfit-repeating style spree. From rocking dresses from 2018 to wearing wedges from her pre-Archie days, the Duchess isn't afraid to recycle her fashion finds. Now, Meghan Markle's Everlane jumpsuit is the latest outfit to make a reappearance.

According to Harper's Bazaar, the Duchess visited The Woodstock Exchange, an art center in South Africa, where she met female entrepreneurs on Sept. 25. Later in the day, Markle attended an event with mothers2mothers, an organization which supports women living with HIV. During both events, Markle wore the $120 piece from minimalist brand Everlane. The the all-black jumpsuit features a sleeveless design with wide straps, a cropped leg, and a tie waist. Markle chose to pair the piece with gold statement earrings, a delicate bracelet, and the Jennifer Meyer ring she's been wearing while in Africa.

If you want to shop the jumpsuit, there's good news. While the Markle Effect is real, the piece is still currently available on the Everlane website. Not only is the Duchess's black version up for grabs in sizes 00-16, but the brand also sells the jumpsuit in sky blue, a warm brown, and red.

If this jumpsuit looks extra familiar, it's because Markle wore it more recently than her other repeat outfits from the trip. Back in July, British Vogue released behind-the-scenes footage of Markle as she worked as the guest editor of the magazine's September issue. In those videos, she's wearing the same Everlane jumpsuit.

The jumpsuit isn't Markle's first Everlane piece. One of her more well-known style choices from the brand is the Day Market Tote. The Duchess was originally spotted with the bag back in 2017 when she attended the Toronto Invictus Games with Prince Harry. The $165 bag became so popular after she wore it that the brand even created a loafer inspired by the tote.

Nearly every outfit the Duchess of Sussex has worn in South Africa has been a repeat. While visiting the District Six Museum, Markle rewore the same blue Veronica Beard dress she wore in 2018 while on tour in Australia. The ensemble was actually a repeat from head-to-toe, as she paired the frock with her Castañer wedges that she's commonly spotted in.

A day later, the Duchess wore another piece that she was first seen wearing during her Australian visit. The Duchess wore a brown and olive stripped maxi dress from designer Martin Grant while attending a reception for her and Prince Harry. While she originally wore the dress with wedges in Australia, she switched up the look a bit by pairing it with black pumps.

There might be a good reason for all the style repeats. The Duchess chose to forgo wearing her diamond engagement ring while in South Africa to remain low key, according to Marie Claire. Since her sartorial choices in the country have generally been either affordable or repeats, there's a chance she could be making the same decision with her clothing.