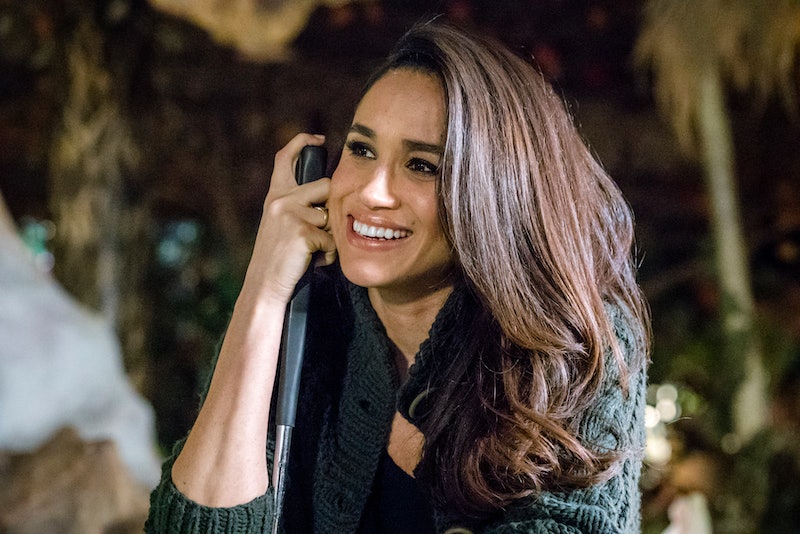 Before Meghan Markle was the Duchess of Sussex, she was a queen, of the Hallmark movie that is. Although the royal only starred in two Hallmark movies, they are as valuable to pop culture as the Queen's jewels. So, let's dissect which Hallmark movies Markle was in, and perhaps re-discover some of the charm, romance, and style that made Prince Harry fall for her in the first place.

Now, Markle has got some pretty iconic credits on her résumé that the media pounced on when things between the actor and Prince Harry began to heat up in the fall of 2016. Sure, she held a briefcase on Deal or No Deal, yes she was attorney Rachel Zane on Suits, but even more urgently, Markle gifted the world with two glorious Hallmark movie showings to unpack.

In 2014, she entered the Hallmark rom-com game with the Fourth of July-centered (yes, you read that correctly) love story, When Sparks Fly. True to the network's form, if they like you, they really, really like you. Markle never reached Candace Cameron Bure or Lacey Chabert-level heights on the channel (she was a little busy becoming a royal and all), however her debut was promising enough to ensure her 2016 movie Dater's Handbook.

So, like any good Hallmark movie plot, let's meet-cute with Markle's roles and take a chance on loving them both for exactly what they are. (Caution: you may feel the urge to binge like 50 of these things when this is all over.)

If you thought Hallmark was only for Christmas and Valentine's Day movies, let me introduce you to this Fourth of July-themed rom-com. In it, Markle plays Chicago Post journalist Amy Peterson. She does the whole city girl returns to her hometown and reconnects with an ex thing. Plus, you know she's got a distant boyfriend back in the big, bad city who is causing her problems.

The whole July 4 narrative comes in when you discover Amy is writing about her family's firework business. Yep. Not to mention, this piece must save the Chicago Post from shutting down entirely. As if that wasn't enough plot to work with, Markle's character is actually enlisted to help plan her best friend's Fourth of July-themed wedding to...(who else?) her long lost-love Hank (Christopher Jacot). Come for the unconventional holiday theme, stay for the word on Chicago Post's fate.

Yes, mere months before Markle was linked to her future husband and sixth in line to the throne, she starred in her second Hallmark feature. In it, the former Tig founder plays Cassandra Barber, an unlucky-in-love business woman, who takes on the very lifestyle blog-esque endeavor of finding her perfect match via a, you guessed it, dating handbook.

So, Markle's character must ultimately choose between the safer romantic option in George (Jonathan Scarfe) or the adventure-seeking choice in Robert (Kristoffer Polaha). But of even higher importance: the now-Duchess plays pool in this movie! That's worth the 90-minute investment in Dater's Handbook alone.

After you've finished deciphering the lip reading of Beyoncé and Markle's official meeting (will it ever really be over?), become royally engrossed in Markle's all-too-brief Hallmark filmography.

More like this
Tyler Perry’s Birthday Note To Meghan Markle Mentioned Struggles She’s Overcome
By Brad Witter
Sky’s New Princess Diana Doc Tells Her Story Like It’s Never Been Told Before
By Frances Stewart
At 28, Lesley Manville Was Acting, Picketing, & Singing Kate Bush Songs
By Olivia-Anne Cleary
Here’s Everything Coming To & Leaving Netflix In August
By Jake Viswanath
Get Even More From Bustle — Sign Up For The Newsletter